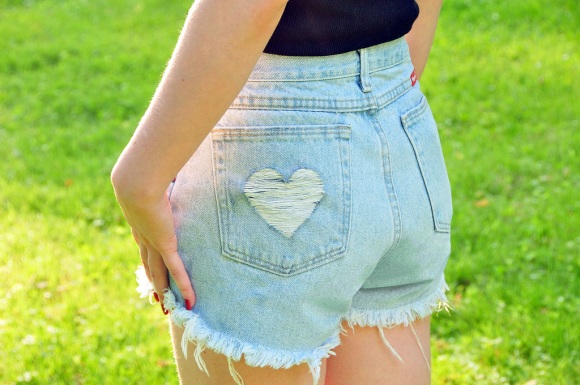 Lessons Learned From a Pair of Cut-Offs

When I was 13, freedom meant a pair of very short jeans shorts. Though both fortunately and unfortunately, my father didn’t agree with me. He told me that no self-respecting girl would wear something like that and that he didn’t care if all my friends were wearing them, because no daughter of his would parade around in such short shorts. You can imagine that as a hormonally charged adolescent, I was livid. After all, it was my body, and according to John Mayer, my body is a wonderland. But perhaps at 13, my father was smart to keep it a private wonderland.

However, despite his best attempts at logic and reasoning, nothing could dissuade me. Firstly, I didn’t see how it was his choice to decide what I wore. And secondly (and more importantly at the time), I was desperate – desperate to be liked and to fit in, desperate to feel pretty and wanted in a pair of short shorts. And so I did what any rational teenager would do – locked myself in my room, turned up my boombox and blasted Britney Spears’ “Overprotected” as loudly as I could to make sure my dad really got the message. Needless to say, my aggressive boomboxing lacked the persuasive effect I had hoped for, and I didn’t get my short shorts. I was crushed and diminished, but remained determined. This wasn’t the last time those short shorts would call my name.

Years later when I was in college, in charge of my own body and with access to my own bank account, I decided to put my hard earned minimum wage to the purchase of a pair of entirely too small very short shorts. I was finally free: free to dress my lower half as I pleased, free to let my body be the wonderland that it was, and free to sing Destiny’s Child’s ‘Bootylicious’ at the top of my lungs in my new short shorts. What I didn’t anticipate, however, was the fact that these short shorts might actually look awful on me, which obviously they did.

It wasn’t until afterwards when I saw a picture of myself in my very short shorts that I realized perhaps my body wasn’t made to squeeze into such a small “container”. Furthermore, what I had perceived as being sexy this whole time was in practice far from it. See, my dad was right about one thing – often sex appeal has much more to do with what is not seen than what is freely offered. But at 13 I didn’t get it; I didn’t understand that my body really was a wonderland, and that the way to winning real affection and admiration wasn’t by being the prettiest, perkiest or proudest wearer of the shortest shorts.

Though these lessons about beauty and worth are important, they are somewhat beside the point. What I learned from the “shorts debacle of 2007” was a) I should start doing more squats and b) sometimes “you just gotta buy the shorts”. I’m no idiot; objectively, I should have known that a piece of fabric that barely covered my butt cheeks would likely do little to nothing for my figure, and yet buy them I did. I bought them because I wanted them. I wanted what I thought they stood for- sexiness and confidence. To me, buying those shorts was like giving myself a giant “YOU GO GIRL!” But most importantly ,those short shorts were my decision.

Sometimes we make stupid decisions: we date men not worth a minute of our time, treat our friends like they’re disposable goods, snap at our parents, slack off at work and buy outfits that were meant to stay on the mannequin. But the beauty of those choices, stupid as they are, is that you made them, and hopefully you learned from them. I had to buy those shorts so that I could put them on, take a picture in them, scream in horror at said picture and then decide for myself that I didn’t need a pair of short shorts to make me beautiful.

When I was 13, freedom was just a pair of shorts, but these days, freedom is about a lot more, it’s about having the freedom to make my own mistakes and learn from them. And learned my lesson I have, let’s just say these days I stick to 5 inch inseams.