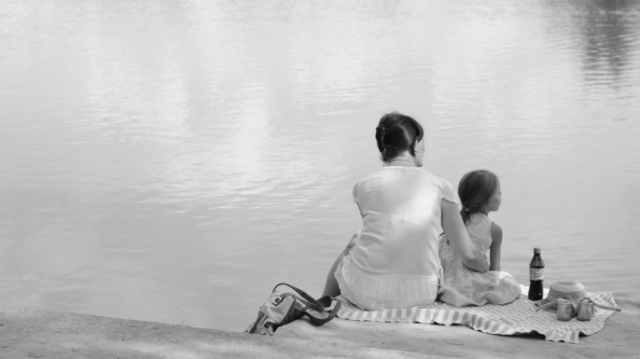 When you become a parent, it’s not all about you anymore. Thankfully! A new level of awareness and responsibility springs forth, a powerful concern for another’s well-being. For me, having two young daughters has not only expanded my access to joy and deepened my sense of gratitude, but it has heightened my concern for the dangerously subversive messages they’ve already started to receive.

While I’ve been a devoted social activist and champion of women’s issues for some time, it wasn’t until this “Mama Bear” instinct kicked in that I truly understood the media’s influence and the grave implications it has on the way women feel about themselves. It’s not just the lone advertisement that screams, “Find Mr. Right Before it’s Too Late!” or the single magazine cover plastered defiantly with “Fight Aging!” that’s going to demolish one’s self-esteem. It’s the cumulative effect of this constant barrage that erodes and undermines our confidence.

The good news is that we have choices about how we react to such messaging and how we relate to other women. I’ve learned to surround myself with women who lift me up and leave me feeling nurtured rather than drained. I’ve learned to watch my words too, particularly around my daughters – two of my greatest teachers – doing my best not to gossip about other women or even myself. If they were to hear me put some of those seemingly automatic thoughts on loudspeaker, such as, “I look bad today… Look at those bags under my eyes…” I now understand that it would impact them in a profoundly unhealthy way. Just as young people absorb all kinds of messages from the media, young girls learn what it means to be a woman by watching the older women in their lives. As role models to young girls, we have some big challenges ahead of us.

I’m proud that today, at 43 years old, I’ve come to value the aging process and focus on inner rather than outer beauty. This has come with time, spiritual practice, motherhood and many mistakes along the way. I’ve learned to anticipate growing older with a sense of excitement. I want my daughters to see their mother fearlessly and gracefully claiming her body, her voice and her years.

Easier said than done, of course. For me, it’s required discipline: Just as I’m careful about what my daughters are exposed to, I’m just as careful with myself. I avoid magazines that critique what female celebrities are wearing, what they’re buying and what they look like. I skip right past channels that exploit “cat fights” or reality shows. And I’ve learned to walk away from any real-life judgmental conversations about women. They bring me down. They bring us all down.

In order to cultivate a healthier outlook, I’ve worked hard to shift some of my personal paradigms as well. In the modeling industry, while my own image sold dangerous messages to others, I too was receiving some pretty warped misinformation about standards of beauty. I internalized shame about aging – it was something to run from, lie about. I was encouraged to jump on every job I could before my 20-something expiration date. But even before modeling, I’d been trained by my own cultural influences to worry about my looks and fear those inevitable wrinkles and stretch marks. Long before I was a part of the media-machine, I’d decided that there was essentially only one good way to look – young.

How do we maintain a healthy concept of beauty? What does it mean to look and feel beautiful in a time when shielding ourselves from such messages is nearly impossible? In an era when revealing how old we are is taboo and asking a woman her age is impolite, a risky social move akin to bringing up religion or politics at the dinner table. If she dares to state her age, she’s given a “compliment,” whether sincere or not, such as, “Wow. You don’t look your age.” Why in the world has that become a hoped-for complement? Why would looking one’s age be something to dread?

Yes, media’s a culprit, but it’s hardly the only player contributing to this fear of aging and these warped ideas about beauty. I feel the media can and should help host the solution. I blog, I tweet, I sat for a round of television interviews to promote my memoir and I recently walked the runway in Milan for the only “plus size” designer to showcase at ANY Fashion Week.

Just as I screen what my daughters view, I’m also the “mama bear” in my professional career, and I select exactly how and where I want to insert myself into the media and what messages I want to convey. I believe that no “look,” no matter how seemingly flawless, equals happiness.

I often wonder how women, together, can transmit such positive messages on a larger scale. How extraordinary would it be to experience a supportive sense of community, one that collectively dismissed toxic media messages? How beautiful would it be to feel part of a unified whole, a member of a powerful sisterhood. What if we sought to actively create such a community and then committed to nurturing it on an ongoing basis? I think this begins at the individual level, first rethinking how we relate to ourselves, then to each other – at home, at work and even online with like-minded strangers. I’d like to think this is possible. I’m committed to doing my part for my daughters, for our daughters – and I’d like to do this work with other women who think it’s possible, too.

Carré Otis has long been one of the most recognizable faces in modeling, headlining in campaigns for Guess, Donna Karan, Calvin Klein, and Revlon. As a supermodel, Carré has appeared on the covers of Vogue, Elle, Harper’s Bazaar, Glamour and Cosmopolitan. She’s worked with many of the world’s greatest fashion photographers, including Richard Avedon, Herb Ritts, Helmut Newton and Peter Lindbergh.  In her book Beauty Disrupted: A Memoir, Carré shares her unique insight into the business of beauty and the high price it demands by giving an honest account of her struggle with love, identity and spirituality.  Now a wife and busy mother of two she’s found a new voice as a passionate advocate for young women in and out of the modeling industry. Read more about Carré on her website carrelife.com.

More From Carré Otis view all