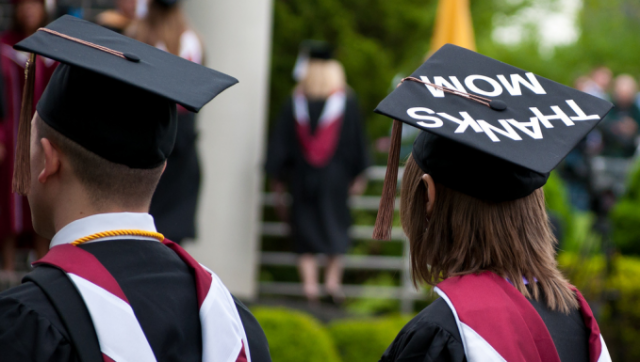 Every spring, a fresh batch of bright-eyed college graduates march up to the stage to grab their diplomas and wake up the next morning to start the first day of their fabulous dream job that will launch the career that they were destined to fulfill and spend the rest of their life loving it. Right?

The truth is, graduating college is just the beginning – not the end – of a tumultuous journey. The journey of life. We like to think that college is supposed to prepare you for the real world. You work hard in classes to learn the skills to land a job, gain experience in your field and by the end you’re supposed miraculously be prepared to take on the world. This might be true for 1% of college attendees. In reality, the rest of the 99% of us face the harsh responsibility of finding a job that comes with adulthood. Even though I felt I was prepared for the responsibilities that come with being an adult while I still a member of the cushy university community, I was not prepared emotionally. Graduating is a crash course in reality and I frequently asked myself, “Is the rest of my life going to be this terrifyingly shitty?”

At this time last year, I was holding back the emotional chaos from swallowing me whole while trying to live it up in the last few weeks that I would have in college, ever. What was going to happen the day after I got that diploma? As that day approached, the one question that I was asked 5 times a day was, “What are you going to do after graduation?” That simple talking point became my darkest demon. I barely allowed myself to dream about where I wanted to be for fear that it wouldn’t come true and I’d only end up disappointed.

Through the weeks leading up to graduation day and the many months that I was lost and jobless that followed, the one constant that kept me going was my inexplicable need to keep trying. “If I just apply for this one last internship, if I just submit this one last article,” I thought, “then maybe, just maybe, I’ll have a purpose.” It is not easy to fight back the nagging realization that you have no place in the world. Your only place is on this couch in your mom’s house, eating this ice cream and fighting back these tears.

I quickly began to slip into a dark hole, often spending up to twelve hours a day on my laptop applying to any and every job, internship or freelance gig I could find. I spent the summer in my sweatpants, eating every carb and piece of cheese that came into my line of vision while driving my supportive mother insane. I was convinced that if I missed a single job posting, I’d end up unsuccessful and depressed the rest of my life. I had to distance myself from Facebook because seeing all the great things that other people were doing took a big toll on my self esteem. In reality, mostly everyone else moved back home after college, but people just don’t talk about their struggles on social media.

It got so bad that pretty soon not a single day went by that I didn’t break down in tears at least once. I cried because I felt I wasn’t good enough, smart enough or strong enough to handle this point in my life. I was depressed because I was eating, and I was eating because I was depressed. I was hyper-sensitive and certainly not a person anyone would enjoy being around. Eventually, my mother encouraged (or rather, forced) me to start volunteering, just so I’d put on real clothes and get out of the house a few times a week.

A year later, I am in an infinitely better place than I was in those post-college blues. Is my life fabulous and exciting? Uh, yeah right. However, I did move to the big city and found a job in the field I worked toward in college. I make just enough to pay for rent, bills and food and sometimes I can even splurge on a fresh pair of kicks from Payless. You soon start to realize that finding “your purpose” is not just the dilemma of a recent college grad, but a lifelong process. Of course I look back and wish I had spent that last responsibility-free summer differently. But even in the midst of if it, knowing I’d regret my actions later, I just simply could not help it.

I felt entirely alone in my post-college blues, like no one else in the world knew how I felt – not my parents, my friends, the people I reached out to for jobs. Truth is, they have all been through it. When you have big dreams, it is difficult to settle for anything less. I realize now that it only made me stronger and more able to handle life’s tough moments. I’m 23, I have a ton of growing up left to do and my life is entirely ahead of me. Working towards discovering who I am and what I want to be doing is a daily trial, keeping in mind that the desire for happiness trumps any hope for fame or fortune. In the words of F. Scott Fitzgerald, “I hope you live a life you’re proud of. If you find that you’re not, I hope you have the strength to start all over again.”

Laura is a twentysomething writer and PR lady based in New York City navigating her way through the adventures of young adulthood. Laura spends a lot of time on the internet and enjoys films and music. After being told she looked like a young Geena Davis by a customer at her high school job in an ice cream shop, Laura decided if all else fails she could fall back on playing Ms. Davis in a movie about her life. You can find her on Tumblr and Twitter.

To thine own self be true. I’m definitely my own self!