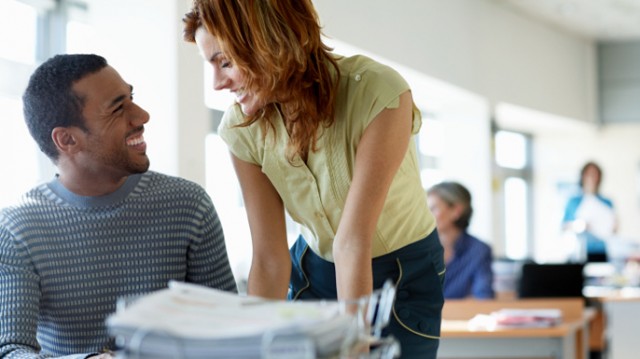 Flirting At Work And The Lesson of Paula Broadwell

The vilified vixen in the tight dress who has burned down many legacies in her wake. We can rattle off her recent prey: John Edwards, Anthony Weiner, Mark Sanford, Eliot Spitzer, Arnold Schwarzenegger, David Petraeus- but we both know that’s just (barely) scratching the surface. And something else we know? When the match that lights an affair strikes, it tends to strike at work.

I’ve never actually considered myself old-fashioned, but a few weeks ago when I wrote about the dangers of flirting at work, I was accused of being a stick in the mud. On an interview with HuffPost Live, the general consensus from the show hosts was, “Pssshaw! What’s wrong with a little harmless flirting in the office?” But this is where I think people get confused. They put “flirting” in the same bucket as “being outgoing.” I don’t.

You can be outgoing- e.g. extraverted, full of life, cheerful, funny, etc.- without being flirtatious (e.g. innuendoes, giggling, hair tossing, playful touches, non- platonic gazes, etc.). The difference between outgoing and flirtatious is making it sexual. When you do that, you’re laying the groundwork for something more. Period.

Obviously you should think seriously about hooking up with a colleague in the first place, but if you have absolutely no intention of going down that road, you’re just making a routine relationship unnecessarily complex. The question is: Why?

Because the attention feels like power? Please. Flirting is only powerful at home. In the workplace, it’s actually subordinate because it’s a sign of low confidence. When you use “sexy” to garner attention for yourself in the office, what you’re really saying is that’s all you think you have to give.

So is the appeal of flirting because it’s dangerous and kinda hot? I get that. Flirting can be a taboo, fun escape from the realities of home which, let’s face it, can be hard and unglamorous. If you’re both single and you’re interested in a relationship, the following advice doesn’t apply to you. But if you’re married or flirting with a married man, the sexual tension- while exciting– is still like a fault line running underneath your feet. You don’t know when it’s going to erupt, but when it does watch out- because everything will crumble.

This is why I got so pissed off at the news media recently for running headlines like, “Why flirting at work may be a good idea” (Yahoo) and opening posts with “Put that book down young lady and start experimenting with make-up.” Seriously? Advice like that is reckless because it only takes the right environment, the right drink, the right “match” and all of the sudden harmless flirting becomes something you can never take back. It’s like putting a nail through the wall: you can take the nail out and try to cover it up, but the hole will always be there.

And while I’m at it, the very behaviors that career women have been told NOT to display in the workforce if we want to be perceived as competent are exactly the behaviors associated with being flirtatious. So as media and educators I believe we have the job – no, wait, the responsibility – NOT to blur the line in a misguided attempt to make news, but to draw the line so women are crystal clear on what is professional behavior and what isn’t.

But since that’s not happening, it looks like the onus is on you to know where the line is. My two cents: Be flirtatious at home, be flirtatious in a bar, be flirtatious in the bedroom. Swing from the chandeliers if you like. Just make sure you can look yourself in the mirror the next day.