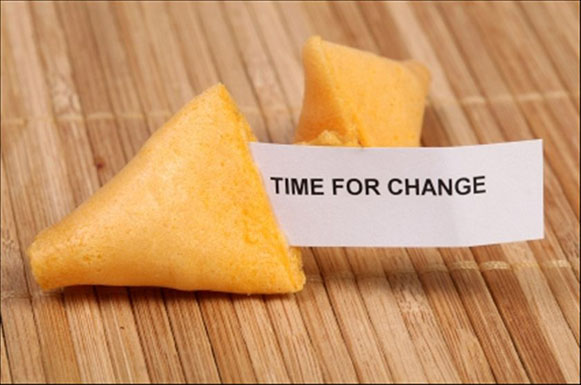 Losing My Identity, Reinventing Myself

Working in television was always my dream, but for the past couple of years, it has become a bit of a nightmare.

My dream began when I interned at MTV at age 22. Over the next eight years at the company, I worked my way up from Production Assistant to Producer. Fulfilling the desire to spread my wings, I left the company at age 30 and since have been producing under my own production company. Now, I’m 39 and CRAVING a career change.

If I’m really honest with myself, the reason behind the need for a change is because although I’m really great at what I do – my heart just isn’t in it anymore. I don’t want to sit in a dark edit room for 36 hours arguing with an editor to make the smallest of changes from the network, I don’t want to lose my shit when my first scheduled interview of the day is 45 minutes late, I don’t want to worry about how not being able to afford that Oprah clip will affect the show. What I do want is to be inspired again, to not allow my work to be EVERYTHING and to contribute something beautiful to the world. I don’t think that’s too much to ask – do you?

After much consideration and contemplation, I’ve decided to study floral design at the NY Botanical Garden. Sure, floral design might seem like an odd choice, but for me it made perfect sense. Not only will it still allow me to be creative and evoke an emotional response with my work, but instead of my end product being an entertainment news piece or a one-off special that practically no one will watch, my end product will be a thing of beauty that enhances its environment and makes people happy. And, instead of going back to school for God knows how long, the certificate program that I’m pursuing is relatively short and can be completed on my own schedule.

Speaking of schedule, I just completed my fifth floral design class and have been thinking about beginning my internship in the New York City flower district. I can’t believe at my age I’m starting over again. What if I made the wrong career choice? What if I fail? Will people like my designs? How will I ever remember the botanical names of every flower? Will I be able to cope with the major decrease in salary?

But in the face of all my fear and doubt – I do believe that I can do it.

The main struggle for me has been my identity and how that’s always been wrapped up in being a “producer”. If I’m no longer a producer, what am I? Of course I know that I shouldn’t identify myself with WHAT I am, but WHO I am, but it’s difficult to practice.

Everyone in my life from my friends to my husband was comfortable with me being a producer. It was how they identified me and identified themselves, in relation to me. My husband always bragged in the past about how his wife was a producer and quite frankly, I’ve always been excited to answer, “What do you do?” when meeting people because I was so proud of what I did for a living. It was the coolest job ever. But what I needed to learn was that I was much more than what I did for a living. I was and remain a strong, intelligent, sensitive woman who also happens to be a loving wife, daughter, sister, aunt and friend.

Those were the roles that defined me. And as a result of this realization, my priorities shifted. What used to thrill me – creating television at the cost of my relationships, my health and sanity – became silly. I wanted sleep. I wanted to be healthy both psychically and mentally. I wanted to spend time with my husband, family and friends and be truly present. I wanted to achieve balance. And at the end of the day, I listened to my inner voice and did not allow myself to become swayed by other people’s opinions and expectations of what my life should be. I was the only one living it, after all.

And don’t get me wrong – I haven’t gone in with blinders on. I understand that just because I change careers it doesn’t mean that I will be magically transported to a world where stress, hard work and long hours don’t exist. I am fully prepared to put in the effort, but hopefully once I complete the Floral Design certificate program, I will kick off this new career with a renewed spirit and drive, much like I had when I was 22.

That girl had no doubt in her mind about what she wanted to do with her life and she made it happen. Maybe after experience replaces naiveté, doubt creeps in because you know you’re not always in control.

If I could say anything to my 22 year-old-self,  it would be follow your heart and don’t panic if that eventually leads you away from television. Dreams can always be redesigned.

Whether I succeed or fail as a Floral Designer, my story has a happy ending because throughout this process of losing my identity, I found something I wasn’t expecting to find. Myself.

Producing television was my passion until I decided to pursue a second career in floral design. If I’m not in class at the New York Botanical Garden or writing for A&E Biography, you’ll find me cycling in the green mountains of Vermont, walking on the beach with my dog, Lucy or on my couch hogging the remote from my understanding husband. For me, life’s all about balance.