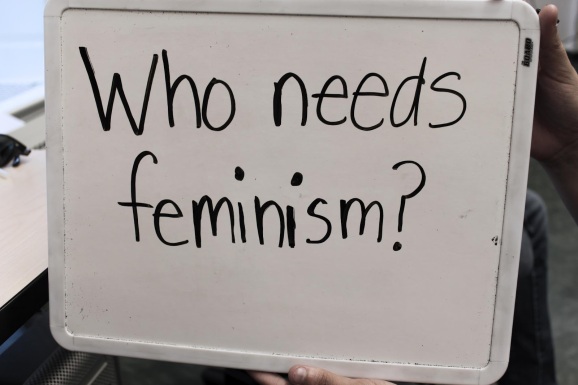 On May 15th, my first book was published. This fact is not a result of some pretentious belief that at 19, my writing skills have been so carefully honed to the point that my work must be shared with the world. It was not some ploy to get into college. Contrarily, writing this book was the most difficult thing I’ve ever done, and something I almost didn’t do. But it was also an experience that completely transformed me, and for which I will forever be thankful.

After a year of running the FBomb, a blog and community for teen feminists that has tens of thousands of unique viewers every month, I was approached to write a book about the next generation of feminism. I tried to explain that The FBomb was always meant to be a community – a place I may have started, but a place accessible to everybody, and composed of a diverse array of voices, not just my own. I didn’t view myself as a leader so much as an organizer and perhaps a creator. Who the hell was I to impose my beliefs on the world?

But then I realized I had to ask myself: is this reluctance to write a book based on my belief that feminism should be a collective effort rather than driven by singled-out leaders, or is it based on fear? Am I so scared of doing something I know virtually nothing about, of putting my voice out into the world in one of the most definitive ways possible and of the criticism that will inevitably follow that I’m going to turn down an opportunity that is not only personally valuable, but from which others very well might gain something?

The answer, I found, was both, and while I respected and still do respect the former, the latter was simply unacceptable. I had always considered myself to be a strong, independent woman – I identified as a feminist in high school in Ohio for God’s sake. I clearly wasn’t afraid of at least some criticism thrown my way, and yet here I was, frankly terrified of positioning myself as a leader. My feelings had clearly surpassed modesty and had entered the clear terrain of self-doubt and lack of confidence. It was then that I knew that writing this book was something I had to do in order to be the woman that I wanted to be and knew I could be. So I agreed to write the book. Specifically, I agreed to write it my way, and figuring out what that actually meant turned out to be the most transformative experience of my life.

From the first second I agreed to do the book, I constantly had to make Big Decisions. Previously, the biggest decisions I’d had to make was whether or not it was appropriate to still go trick or treating in high school (and that didn’t even turn out to be a hard decision – free candy is free candy whether its given to you with a smile or a disgusted scowl). Since I had no plans to delay school to write the book, I first had to decide whether to write it with a ghostwriter. I immediately shut down that idea. I knew if I was going to write a book, I was going to write every single damn word.

I also had to make the decision of whether or not to express the feminist beliefs that I knew were technically “correct” – the ones that were mainstream, the ones the fewest number of people would disagree with – or whether to express the feminist movement in which I believe. I believe that feminism for my generation is different than any other previous generation’s feminism. Our activism is online, the issues we deal with are subtler and require more dialogue and support to tackle. I strongly believe that while we can take feminist issues like violence against women and double standards seriously, we don’t have to take ourselves too seriously – that there’s more than enough room for love and laughter in this movement and that, in fact, feminism thrives on humor and support. I decided to write what I believe and what I know to be true, and to write it in my own voice (not some scholarly, posturing voice of what I thought a “writer” should sound like). I know full well that there will inevitably be feminists who disagree with me. But then again, I’ve found that there will always be people, feminist or not, who disagree with everything/anything I say and/or believe, and that pandering to them is pointless.

I had to make decisions after the book itself was written. During the editorial process I had to fight the urge to simply agree with every change my editors made – which I’d always done before, ever the good student – and fight for my words and beliefs to make the cut. I had to decide on a cover, opting away from images that ranged from weirdly sexual to bubble-gum girly, ultimately deciding on one that felt right to me.

All of these decisions seemed so daunting, so life-threateningly serious while I was making them. But ultimately, they ended up being simple. Whereas I started the process in a place of self-doubt, I ended it knowing exactly what I wanted to say, exactly what I had to do. As it turns out, I always had a strong sense of self, a definitive sense of my personal limitations and definitions of what’s right and wrong for me. I just had to learn how to listen to myself and how to express it. I don’t know how long it would’ve taken me to figure that out had I not written this book, which is why, even if this book only sells 15 copies to my family and high school frenemies (who are really only interested in hate-reading it to more effectively hone their animosity towards me), I will always be proud of this book and will always be thankful for the experience it gave me.

Weighing in at about 8 ounces, and after years of labor (seriously, I feel like the age at which I will have an actual child just got pushed back 5 years after this experience), I am proud to (officially) welcome A Little F’d Up: Why Feminism Is Not a Dirty Word

into the world. I am in love with it. I hope you will be, too.

Two things I hate, cynicism and regret. Why dwell on something?