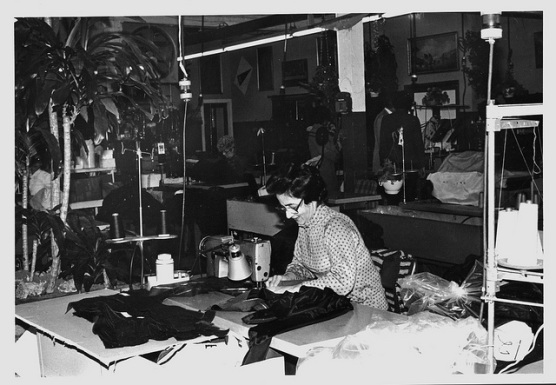 My first “real job” out of college was at a production company that made TV commercials.  While most of the commercials were targeted at male audiences, 95% of the office staff was female.  And most of us were under the age of 25.  It was kind of like joining the sorority I had always avoided – there was a lot of competition and a lot of gossip, but I’ll admit, it was also a lot of fun.  We worked hard, long hours.  We banded together when things would go wrong or when the pressure was intense.  We helped each other through relationship drama, pregnancy scares and wedding plans.  It was a very unusual work experience and I don’t think I will ever find an office that’s quite like that again.

The most interesting aspect of this mostly female office staff was that we were all financially supporting a man.  Boyfriends and husbands  alike, we each had a special guy at home who was out of work, between acting gigs or in my hubby’s case, didn’t have a work visa.  And they all stayed out of work for the majority of the three years I worked there.  Even my boss, who was a very successful producer in her 40s, was bringing home the bacon for a live-in boyfriend.

I was fascinated by this similarity and considering this was my first “grown-up office job”, I had to ask: was this the norm?  Are the women really taking over the job market?  Or was it something about that group of women?  Was it something in our personalities, perhaps the same thing that attracted us all to the same company, that attracted certain types men?  Men who clearly weren’t threatened or concerned about being supported by their ladies.  I was intrigued and wanted to get to the bottom of it.

So I pretended I was a sociology expert and started asking questions. I asked my co-workers about their ambitions, both professionally and personally.  Did they want to stay in advertising or film making?  Did they want to become producers?  Did they want to get married and have kids?  How would they feel about being a stay at home mom?  The questions went on and on, but you get the idea.

Most of their answers matched up.  They all said they felt a strong desire to be successful.  What had once been dreams of movie stardom had given way to more concrete ambitions of being managers or producers.  But they also all wanted to find some kind of creative success– maybe design a clothing line or write a book that actually gets published.

They all still wanted to be married and have more than one kid.  Most said they really would like to be a stay-at-home mom too, like their mom was… But the luxury of that seemed out of reach and they all said eventually they’d want to go back to work.  Almost every answer to every question was identical.  Blame it on working 10 hours a day together in a small office, but I think the source of our similarity emanated from something deeper.  Something from our past…

We were all children of the ’80s, and all admitted to growing up watching  lots of television shows like The Cosby Show and Growing Pains.  The women in many of the 1980s television shows that dominated my youth were strong, independent, shoulder-padded business divas who knew how to kick ass in the office and be incredible moms at home. I mean, look at Claire Huxtable!  These female characters were lawyers, reporters and advertising executives – and they were always portrayed as doing well at work.  I think that was inspiring and maybe had a bigger effect on us than we realized.  Likewise, most of their male counterparts were, while also successful, working from home and spending the majority of their time dealing with their children and managing the household.

You could say we are the Who’s the Boss generation.  From our earliest days, we’ve been watching successful female characters on TV.  We’ve been hearing a kind of cohesive  “women power” rhetoric that grew into the ’90s and turned up in all kinds of media— from TV to movies, music to fashion.  We never questioned our ability to be successful in the workplace because we were given no reason to doubt it.  We were encouraged to seize business opportunities that our grandmothers wouldn’t have been able to even consider, and with that came a certain amount of pressure to do it, to really have it all.

It’s a wonderful privilege to have that empowerment resonate for my generation, and my office full of female co-workers was clearly a product of that influence.  But perhaps on the flip side, those television shows also encouraged the men of my generation to play out the “stay-at-home” scenario for themselves.  And they could do so without any gender role guilt.  I mean, if it was okay for Tony Danza, why not them?   After centuries of being the bread winners, were men relieved when women started taking over the role?  I wonder.

Of course, in today’s economy every adult is trying to work, regardless of gender or what decade they grew up in.  But I still see the trend in all the jobs I’ve had since that first one.  At least half of the professional women I meet are financially supporting their men.  I also see it amongst my friends.  Clearly the female breadwinner is the norm, at least in my circles.  What’s more, most of my female friends actually make more money than their husbands, or are in higher ranking positions.   They are even still managing to be moms and creative indie business owners too, which I find incredibly inspiring!

When I think about it, it’s kind of amazing how far the women of my generation have come in the workforce.  And sure, I know we can’t really give all the credit to 1980s television shows, but whatever the cause, I’m proud to be a woman in the work place these days.  I mean, just look at us – we are totally workin’ it!