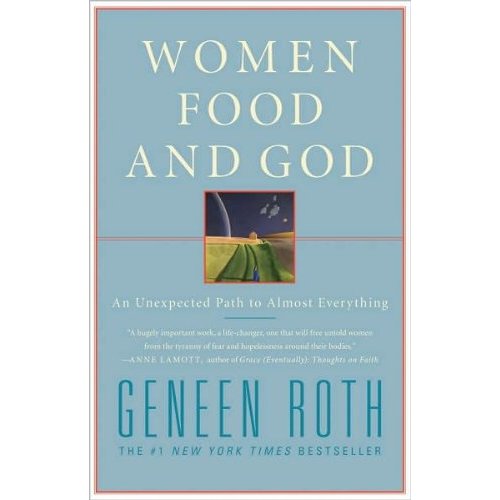 I first became aware of Geneen Roth;’s work 15 years ago when i was shooting a film called Brokedown Palace and was struggling with my body image pretty badly. An actress on that set gave me her first book “When Food is Love”  and told me to read it. It took me ten years to read it and when I did I wished I hadn’t waited so long.

Then came her second book, “Women Food and God,” which I bought in hardcover and as an audiobook. I have listened to Geneen’s voice over and over explaining to me how my eating patterns are trying to teach me about myself and how dieting is not the answer. Restricting food is not the answer… A hard concept to get my head around.

Portia de Rossi told me the same thing in the interview we did for The Conversation and I trust her opinion. It took me awhile, but I’ve tried it and I’m on week three of paying attention to when I’m hungry and when I’m not. Listening to my body’s natural rhythm and not trying to control it. In all honesty it’s uncomfortable. I’m not used to doing it this way, but I can tell you I am greatly relieved and happier than I was before I read this book.

If you think you have an unhealthy relationship to your body, your food and yourself in any way, then I encourage you to read this book. Out of all the books I’ve read about this subject, “Women Food and God” is simple, practical and makes sense to me.

I first became aware of Geneen Roth;’s work 15 years ago when i was shooting a film called Brokedown Palace and was struggling with my body image pretty badly. An actress on that set gave me her first ...

Instead of talking a lot I just absorb. I like to observe and watch everyone.