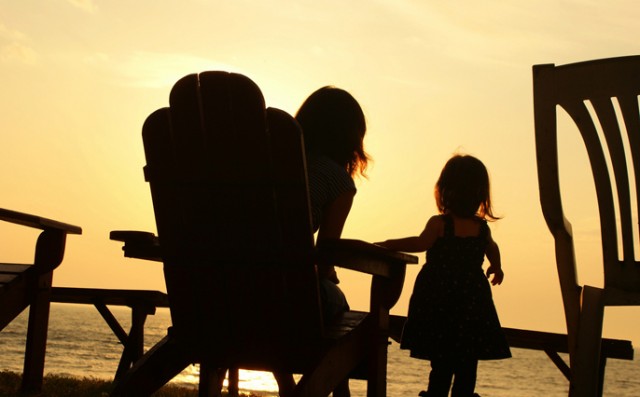 What comes to mind when you think about your mother? When I asked my best friend Ingrid the very same question I’ve been asking myself a lot lately, she said she couldn’t reduce her answer into a few words only. Others, however, replied with stories of the physical comports they associated with their mothers: Sunday brunches, bedtime stories that were told over and over again, Chanel’s No. 5, a studious expression when reading. Then there were a few who talked in more abstract terms: of embarrassment, disappointment and guilt. When trying to answer the question myself, my thoughts go back to Ingrid’s answer: It doesn’t matter how you define your relationship your mother – she still leaves the biggest footprint on your life.

It is the big love, a mother’s love. I remember reading about that instinct some animals have, when faced with a dangerous threat, try to eat their own children; a confused impulse to put them back in the safest place they know. At first, I thought it sounded disguising. But when asking my mother about it, she said she could understand that same need for protecting your own children from pain and unhappiness; the anger when someone hurts them and the lengths you’ll go to sacrifice your own health to pick up after them when they take a fall. It means, as I’ve come to discover, that your mother will not give up on you: because she can’t bear to see you get hurt.

A few years ago, I developed an eating disorder as a result of being depressed for a very long time. I stopped eating as a way of regaining some control over my own life, and as I got thinner and sicker, I become more ashamed and disconnected. My mother, for all the pain and worry I know it caused her, was very patient. She didn’t attack me by confronting my problem, but tried to help me through it by encouraging me to pursue my interest in yoga and by taking me to regular spa treatments. That she didn’t get angry or upset helped me restore a balance in my life. She knew how to help me, because she cares about me more than anyone else, which is why she also affects me more than anyone else.

A mother’s love is not only supporting and loving care: she also holds you to account. Criticism and disappointment from your mother hurts more than from anyone else – because she knows you. She is also the safest place in the world; a place where you allow yourself to let go and be a child again; a place to seek comfort and advice. But when that’s gone, what then? After my father’s accident, from which he nearly died, my mother got seriously depressed. At first no one actually noticed (she’s a master of hiding her own needs and emotions in order to avoid conflicts in the family). But as time went by her condition became more fragile; she could barely get out of bed in the mornings, silently cried over the dinner table, and never contributed to any conversation. Suddenly, I was the one taking care of my mother. I made her breakfast in the mornings, acted as a confidant (something I really regret as I now know far more than what is good for me about my parents relationship), and called her every day to make sure she was still there. After everything my mother had done for me, I felt as if I owned it to her. However, though I know it helped her through her depression, illness and separation from my father, it damaged our relationship. However, that hole does still not feel beyond repair. I am determined to get back to where we were. I won’t give up on her. Just like she didn’t give up on me when I was struggling with my disorder.

So what do comes to mind when I think of my mother? At first, I think of asparagus pies and chocolate chip cookies; our family on cross country skiing trips in the mountains, Easter holidays spent by the pool in Spain listening to my mother reading Harry Potter to my siblings and I; and her being happy playing the piano at our cottage by the Norwegian fjords. All memories now of course. But I do hope I’ll understand when I get older and that I learn from my own mistakes as well as my mother’s. As for now, I’ve learned from how our relationship has developed that no one will ever care quite as much whether you’d eaten your lunch at school, whether you’ve sorted that argument with your best friend or how your university applications are going. And I hope that with time, our relationship will mend itself – that she once again will be my confidant, my rock and my advisor and not the other way around. She is after all, my history and my future. She knows what makes me tick; the small or big things that make me happy. She knows me better than anyone else – sometimes, better than I even know myself.