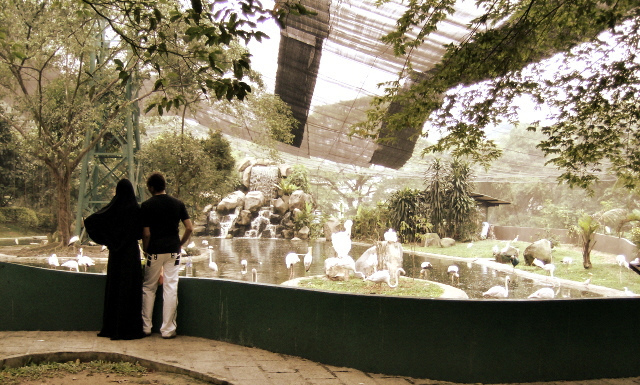 “Absence makes the heart–” psht, as if I can bring myself to finish that age old adage when I am suffering in this way, in an uncomfortable episode of brutal absence.  But go ahead and finish the saying for me, we all know it and it’s widely accepted: Fondness grows out of distance.  Right?

It has been over a month that I have been job searching in the United Arab Emirates, thousands of miles away from my husband in the US. Now that I’ve landed a job in Abu Dhabi, it will be another month or two before we are able to see each other, making this our longest separation since our engagement and wedding day.  It’s hard — there’s no other way to slice it and I have no desire to be dishonest about the situation for anyone reading.  Whoever said lying helps a bleeding heart was lying, and I may or may not want to make their hearts bleed.

Sigh.  I miss his hands, his smell, his gazes, and the lazy left dimple that makes an appearance a few times each day if you watch for it. I miss his arbitrary humming that often occurs mid-afternoon, the clangy sounds he makes when he’s coming in the front door, and I even miss his bouts of silence.

There isn’t a way to get over the ‘missings’, really, but we tried out a few things to cultivate and demonstrate our love for one another while we are so far apart.  What else is there to do but to try to find new ways to keep the love alive?  Besides crying I mean.

Here are some of the things we do generally and lately:

-Watch the same movies ‘together’ at the same time.  We take turns picking out a movie and we set a time and then watch it while chatting or Skyping online.  When you both press the play button at the same time, it makes it feel like you are watching side by side. Oh, and feel free to obnoxiously comment on what’s happening in the movie to each other. That’s always fun.

-We set up our own semi-public, one hundred percent anonymous blog where we post anything, seriously, anything, that tickles our fancy and want to share with the other person.   Once I blogged a factual ‘Did You Know’ meme about entopic phenomena in eyes and it prompted me to tell my husband a story about enlisting my little sister to help me figure out if I was seeing things no one else could and perhaps was incredibly special.  By the way, I recommend using Tumblr for your mutual blog since there is ‘Fan Mail’ and you can have multiple accounts submit to one feed.

-Email each other the links to interesting articles that we have read that week. The most recent of our articles have been about race, the benefits of eating only twice a day, Tabata High Intensive Interval Training, and concept of sin/forgiveness in Islam.  In response, sometimes we leave a quick note about our thoughts about the piece and sometimes a few days after receipt we simply notify the other that we read it.  No obligations to comment, no biggie.

-Look through old photos and show them and have the other explain the circumstances behind them.  With a good supply of old photos, this one never gets old and it is surprising how much comes out when there is an old picture available to jog one’s memory of events.

-Sharing with each other the prayers we’ve said to God in regards to the current circumstances.  Together and simultaneously we pray that God reunites us soon and safely and that we hurry and learn all the lessons we need to learn from our situation so that we can move forward more enlightened.  We kind of compete against each other in a friendly way with stating how much worship we offer to achieve this end.  It’s nice because if my offerings are smaller than his and I lose, well I actually still win since we are praying for the same thing to happen.

-We text each other raaarely, so that when texts do come we feel its specialness and cherish the words in the SMS as they have never been before.  It’s potent.

Woe is me — writing this list is just making the ‘missings’ ache anew.  You see, I miss the shape of his thumb, the singular way he eats, how he looks when he reads on his Kindle on the floor, and his heavy footfall (being a fairly slim guy, how does that happen, aww).  Sigh.

If you are long distance for any span of time longer than 7 days, the most important thing is that both of you acknowledge that something needs to happen to establish and maintain your connection, and then doing something, anything, about it on a fairly consistent basis.  Perhaps the most enjoyable thing in an LDR is both the witnessing and experiencing the different ways that your long distance effort comes to fruition, directly affecting you and your spouse in a tangible way.

As I said, the ‘missings’ don’t ever go away, actually—not until you are reunited with the one you love, of course.  But once the two of you are proactive about conveying and transporting your love for one another, no matter the distance, things can get interesting and even magical.   Absence may make the heart grow fonder but in the presence of the absence there is the potential for creativity, growth, and self-discovery for both individuals in the long distance relationship.

Sigh.  Hope and faith go a long way for this Muslim gal in respect to LDRs.

Sakina Al-Amin manages an Examiner news channel and writes for CBS Local.  In between fervent reading marathons with her husband, she entertains online friends and friends online while following closely and quietly the careers of three celebrities.  She is an American recently residing in Abu Dhabi. Born Muslim.

More From Sakina Al-Amin view all

Practicing gratitude is such an important realignment.