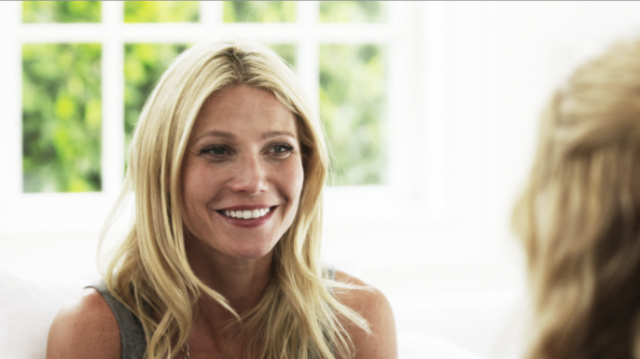 In honor of Father’s Day, I wanted to share the beautiful words my pal Gwyneth Paltrow shared about her dad and the profound impact his life and his death had on her. This was aired on the first episode of The Conversation. Do you have a story about your dad that your want to share with us? Let us know in the comments below!

Amanda: What do you remember of your father?

Gwyneth Paltrow: I was always like on his shoulders. I mean, I have such vivid memories of his hand being too big for me to hold, so me just holding his pinky. And he always having me massage his shoulders from the time I was like three. We were inseparable. It was one of those like amazing relationships. You know, he was the guy. He was like, “I’m always here for you. I am never going down.” You know, and then he went down.

Gwyneth Paltrow: I was alone with him in Italy. I’d had my 30th birthday party there at a friend’s house with some friends. And then he and I were taking a road trip together. He didn’t want to tell me how sick he was, and by the second night at dinner his eyes starting rolling back in his head, and I was like, “This isn’t okay. Like we have to get you to the doctor.” And then just went very downhill from there. And I just have these images that stay with me, like the ambulance driver handing him a rubber glove, and that’s what he was– the whole way to the hospital filling up the glove with blood. I mean, it was very…

Gwyneth Paltrow: Yes, it was very traumatic. And then he just died that first night.

Amanda: You know, I was thinking about the things in life that are inevitable. And there’s so much that is uncertain. And one of the things that’s inevitable is that we’re going to die, and our parents are going to die. Everything else is like up for debate and in Western culture, we have no preparation for our parents passing. I would imagine that it’s somewhat of a right of passage, where you go from being a little girl to having to grow up when a parent passes. Especially your primary attachment parent.

Gwenyth Paltrow: Yeah, I think in that case, I was so in the throes of despair when he died, for so long, and it took me a really long time to get my head above water, because he was the person that I went to for everything. And it was sort of, for me, like how Jewish boys they don’t cut their hair until they’re three because there’s strength in the hair, there’s power in the hair, there’s protection in the hair. And when the boy turns three, they cut the boy’s hair. It’s his first step in becoming a man.

Gwyneth Paltrow: He’s got to find his strength. And that’s what my dad’s death has been for me. It’s like I realized that, “Wait a minute, nobody is ever going to be able to take away my problems. And nobody– it has to be me. I mean, I have to love myself more than anybody else. I have to take care of myself, and I have to find the answer.” As sad as it, and tragic as his death is, and how I would do anything to have him back, it’s almost like a gift that he gave me, because I would not have– I would not be on the path to being the woman that I am if he were alive.

Amanda: I read this amazing book by Joan Didion, called A Year of Magical Thinking.

Amanda: And she talks about wanting– she wanted an autopsy done immediately when her husband passed, because she wanted them to tell her that it wasn’t true.

Amanda: She wanted them to find that actually his heart was working fine, and that he was going to come back to life.

Amanda: And that really impacted me.

Gwyneth Paltrow: Me, too. In fact, I’ve had so many– up until I read that book, and since– that was my main wish was that it wouldn’t have been true. You know, and it’s sad, but it’s not the way his life was meant to go. It wasn’t the way my life was meant to go. So I think there’s a surrender in it at a certain point. It’s like, and that, you know, “The Year of Magical Thinking” makes sense. But after the year, it’s like, “Okay, so let’s figure out what the upside of this is.”

Amanda: So after your dad passed, did you feel an urgency to create your own family? And to partner?

Gwyneth Paltrow: You know, I haven’t thought about it. I mean, I was like pregnant and married within like a year of him dying.

Gwyneth Paltrow: But you know, I think also there’s a part of me that felt when my dad was alive, I didn’t really need to find the right man, cause I had him.

Gwyneth Paltrow: I was like, “That guy is the love of my life, so you know?”

Amanda: You have a really wonderful perspective about traumatic experience. I see that you have distress and you have sadness around losing your dad, but you also, it seems to me, are able to feel that at the same time as having optimism and hope and looking at what the upside is.

Gwyneth Paltrow: I think you have to, otherwise the loss doesn’t amount to anything. And I refuse to have that be the case. You know, I refuse to have it just be a loss. It’s like, “What’s the legacy in that?”