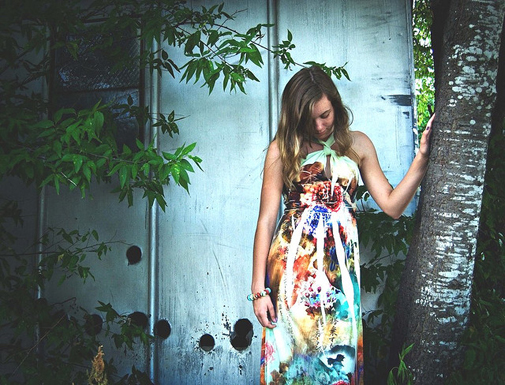 When I hear my friends talk about their dads and what a great relationship they have, it’s very hard for me to identify with them. I love my dad, but he has been a source of pain in my life due to the choices he has made as a father. Growing up, I was often scared of him. I never used to like having friends over because inevitably, he’d yell at my mom in front of them, or at me. The environment I lived in felt unsafe. My father was never physically abusive, but the verbal and mental abuse that occurred over the years when he was drunk (or sober) was enough to negatively influence the way I grew up to form opinions about myself, and others.

To this day I catch myself hating my body, hating the way I look at times, judging myself for not reading enough literature or knowing enough about politics, or having a good enough job. And worse than that, I have judged others for how they’ve looked, how intelligent they were, what kind of job they had. If people didn’t live up to the mold that my father had created, something MUST be wrong with them. It never occurred to me, until recently, that something was wrong with my dad. I eventually started to realize that everything in my world was distorted. I had my father’s narcissistic viewpoints about everything. And the more critical I became, the less I wanted to be around myself, which was a very discomforting feeling.

In the last couple of years, I decided to delve into books about letting go of the relationships in my life that had become draining or unhealthy. I met new people that showed me a different perspective on life. I learned that I have talent, skills and beauty that I never believed I possessed because I was always told otherwise. Changing my view of “self” hasn’t been easy, I still struggle! But I know it will take time to “undo” some of the emotional damage done, and that’s okay.

The hardest part for me about growing up with my father was that I felt father-less. Even though I have fond memories of my dad and I know he did the best he could, I craved a dad who could offer unconditional love, support my decisions, encourage me when times got tough, and protect me against the world. With that said, I believe that we are always given the experience that we are meant to have in life. If my father hadn’t been exactly who he was, and if my mother hadn’t stayed with him for as long as she did before they finally divorced, I truly wouldn’t be who I am today.

For me, as much as I would love to have that nice guy who gives out bear hugs and welcomes his daughter’s friends into his home and is pleasant to be around, I know that I cannot change my dad. Trying to change him would be no different than him trying to change others to fit his mold. All I can do is work on changing my reaction to him. It’s been almost two years since I’ve had a relationship with my father, even though he lives a short distance from me. Some people don’t understand my decision and believe that I should make more of an effort to see him. Others have said, “Wow, what a jerk! Good for you.” But the truth is – regardless of others’ opinions or judgments – I had to do what was best for me.

I am healthier without my dad in my life because the little voice telling me I’m stupid, not funny, not interesting, and can’t succeed is slowly going away. I do miss having a dad, but I have to remind myself that I am missing the “potential” of the relationship, and not the “reality” of it. Even though my father is extremely intelligent, quite charming, very funny, and fun to hang out with, being in a relationship with him meant continuously bracing myself for the next dig. Separating myself from my father has been a positive change in my life. Learning to not feel guilty about it has also been a positive change.

It would be easy to be a victim of my childhood, and blame my father for the things I do not like about myself or the things he “should” or “shouldn’t” have done. But there comes a point we all have to take responsibility for our own decisions and choices to be who we want to be. I have come to understand that my father’s behavior has very little to do with me, and much more to do with how he views himself. Stepping away from my father has helped me gain the strength and confidence I needed to make some serious changes in my life and I am excited for my journey ahead. We may not always be able to repair a significant relationship in our lifetime, but learning to walk away with compassion is sometimes the best thing we can do to seek closure in the interim and begin to heal.

Dana Maxwell currently works as a copywriter in the corporate world. She hopes to someday be her own boss. Until then, she plans to take a leap of faith and land in LA to pursue her passion for the film and television industry in either a writer or producer capacity. To sum it up: coffee and conversation is a great combo to get to know someone, something can be learned in every situation, and striving for growth and understanding in relationships is key. You can follow her on Twitter @DanaMaxwell30

More From Dana Maxwell view all