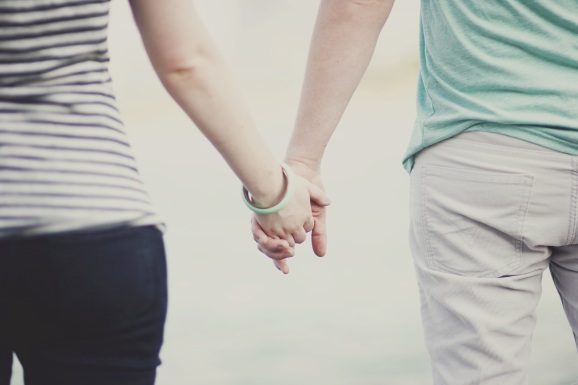 Finding the Balance Between Roles & Love

When I met my husband, we were 20 years old. Seven years later, we were 2,200 miles from where we started our journey.

While my hubby was finishing graduate school, we decided to move to the Pacific Northwest. We sold our home and relocated (trust me, it was harder than I just made it sound). I run an independent design studio from home, and moving turned out to be the best thing for my business. While the recession was a blessing for small studios like mine, it caused a collapse in my husband’s industry. For the first 6 months after our move, my business grew exponentially. I even had one of those moments you look at where you are and say, “Holy crap! I’m making it!”. Then, there’s my husband. For the last 6 months, he’s worked part-time at a popular burrito restaurant.

In the same breath of being elated at my success, I felt overwhelmingly sad for my partner. After all, he’s highly educated (more than me), and he’s stuck in a position that doesn’t allow him to live his dream. What good is my success when my partner isn’t where they wants to be in life?

Why was there this weird resentment/guilty feeling for being more successful than my husband? Especially when my success was sustaining a life that made us happy?

After all, who’s idea of success are we talking about? To us, success is synonymous with happiness. It’s not the money in the bank (though, that part doesn’t hurt). It’s not the number of friendships or relationships or clients I have … it’s the quality of life I’m living. So, why does knowing that I make more than my husband … and I’m doing what I’ve dreamed of for a long time make me feel so bad? Why was I brought up to think this is wrong?

When our marriage became this weird balance of happiness for one & regret for the other, we needed to step-it-up and become a true pair of people working together. I am happy to say that we’ve come through this time in a way that feels healthy for us. Here’s what helped us work through and find our balance:

Enjoying our time together: Our schedules gave us 3 days a week without work. We figured that while the work dynamic sort of sucked, there was no reason to let it bring down the good parts of our marriage. When we could, we went hiking, exploring & took the time to be adventurous. We moved from a place that lacked a lot of awesome outdoors activities, so now we’re learning new things about each other.

Setting boundaries: This is huge, and something we’re very much still working on. Life can become such a drag when you allow outside influences to have a place in your marriage. The biggest place we’ve had to set boundaries is social media & connectivity. As a society, we’re too connected. My job requires I spend a lot of time with email, Twitter, blogging & Facebook. I can literally turn on the computer to ‘check my email’, then realize it’s been 2 hours & I’ve seen a YouTube video of a cat playing the piano. It’s terrible! We used to wake up & check our phones first thing in the morning. Now, we’re trying to wait until after breakfast to introduce the outside world into the day. I’ve also really struggled with setting specific times for work. I have clients all over the world, so my timezone isn’t always the thing that determines my work day. I think my husband feels like it’s a true partnership when I try to match my work week with his.

Communicating: We’ve both felt guilty at times for not pulling our weight or not spending enough time together. I used to be quite the grudge-holder, so communicating our feelings has been really important. It’s amazing how much someone will open-up when you encourage them. By telling my husband I feel so guilty that I’m doing what I love & he’s not able to follow his dream just yet … I found out he’s feeling that guilt within himself, but he’s really proud of me. Without communicating that, I feel like resentment would have pulled us down a bit.

Sharing Responsibilities: I’ve caught myself asking my partner to do something because I’m too busy with work. I hate when I do it, and I’ve really tried to refrain. This means, when I feel like the dishes NEED to be done, I step away from the studio for a bit & do it. We’re both focusing on really praising each other for taking time to do things that need to be done. I grew up in a home where nagging was the way to accomplish things, and it’s really taken a long time to work away from that. It doesn’t matter who makes what, or how long someone was working that day, we try to remember this life is ours to share … and it’s our responsibility to make it what we want it to be.

Ignoring the norm: So what if my partner should be making more money (by society’s standards)? I’m doing what I love, and it’s taken so long for me to realize that’s what it’s about. We are both super supportive of each other, and once we agreed to ignore these roles set by our gender, we were happier.

At the end of the day my partner believes in my journey, and that’s all I could really ask for. Though it took a long time, I finally realize that my success or his success is really our success … it’s all about finding the balance. In awesome news, he was offered a salaried position at a firm in town and will start his career he’s been working towards. The funny thing is, we both acknowledged we kind of liked the freedom we’ve had over the last few months, and were both a little sad by the shift ahead of us. I guess that means that while it seemed off-balance, we really did find our stride.

Ravyn Stadick is a graphic designer & photographer living and working in Portland, Oregon. Focusing mostly on helping other creatives develop their brands, she's a huge advocate for independent business owners & the power of controlling your own fate. Last year, she and her husband decided to pack up and move to the Pacific Northwest. When she's not in the studio, she loves traveling, hiking, finding awesome vegetarian restaurants, knitting (grandma status, for sure), and documenting life on her personal blog. You can follow her on Twitter @ravynstadick.
comments (4)