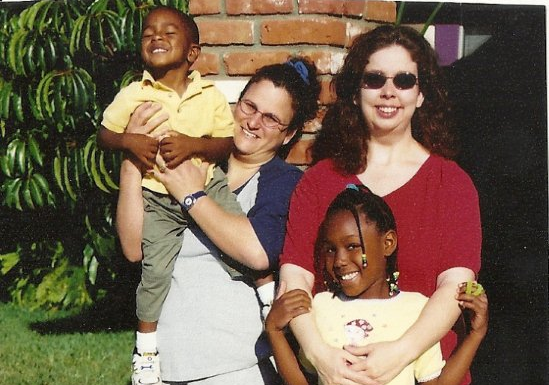 I don’t remember much before I was put in foster care. I remember the face of my birth mother (or birth vessel, as I think of her), people rolling up weed and the smell of vomit in the air. I don’t have a whole lot of good memories at that time. But I could tell you a lot about the day that I was taken away. I could tell you that I stood in the middle of an apartment that’s somewhere in Escondido, California. As a suitcase sat at my side, I munched on a pack of Blue’s Clues gummy snacks that someone had given to me to ease the reality of what was going to happen. There was a scary black woman at the door (which would to be one of the worst foster parents I would ever have) and my birth vessel stood beside me crying, telling me that she’d come back for me. But until then, I was stuck with this woman, her disgusting husband and a crazy amount of foster children that they kept taking in to increase their income. I would have to live with these people, go to a Jehovah Witness church at least twice a week and call them family. That is, until a social worker found out about their doings and took me and my toddling little brother, Jayden, away.

It takes a lot away from a child when you break a promise, especially when it’s that big of a promise from that big of a person. But I think what hurt the worst was the fact that she didn’t see how badly that “family” had treated me. How could a mother not tell whether her child was hurt? How could she not try harder to get her child back? I’ve always been angry at her actions. And to be honest, I’m still angry today. But everything happens for a reason, right?

After a certain number of foster families, I found myself at the end of my foster family journey. By then, I was seven, Jayden was two, I had a 4-month-old little sister, Janelle, and I had just celebrated my first Christmas. And though all it did was rain on this day, it meant everything to be celebrating with people who didn’t hurt you. One day, though, walking around their house, feeling some sense of family, my foster mother had asked a strange question. “Do you care if you have two mothers, two fathers, one parent or anything?” At that time, I didn’t care. Feeling like you belong to a family, feeling loved is all I wanted. It’s what everyone wants, really.

Little did I know I would actually have two mothers. Their names were Michelle Forsmo and Christina Shadid. I remember the very first time I saw them. It was the month of March and I was supposed to be watching out of my bedroom window for them. I was so excited to finally see the faces of my long term parents. Looking out my bedroom window, my heart pounded a million miles a minute when I saw the white mini-van park by the curb. I watched as the women stepped out of the car. The woman in the driver’s seat had long wavy red hair and wore a bright white shirt. Her name was going to be Mama. The woman from the passenger’s seat had curly dark hair, glasses and wore jean overalls with a yellow top underneath. Her name would be Mama Nina. And as I raced to the door to greet them, I didn’t think that we would go through as much as we have together. But once Jayden smiled at them with his big brown eyes and goofy grin, once the non-snuggler Janelle fell asleep in Mama Nina’s arms, I knew that we would officially be loved.

We arrived in Kuna, Idaho a week later. It was rainy and cold. The kind of cold where you could breathe on a car window and write your name or make smiley faces on it. The smell of cow manure wafted through the air and every now and then, throughout the day, you would hear a train and its loud whistle going through town. That was Jayden’s favorite, the trains. And once I got settled into my new home, a new family, I would still feel angry. And I would feel this way until my youngest brother was born.

Jordan, my youngest brother, isn’t related to me by blood unlike Jayden and Janelle. But I believe he is the reason most of my anger has gone away. He was a sick, drug addicted baby that was in pain nearly all the time, but when he did smile and laugh it was heaven. I loved taking care of him. Still do as he turns eight this year. He reminds me every day that everything’s going to be okay. My family reminds me that I will always have someone. So when I go to school and I see something, hear something mean, I think of my family. And in this town, the culture is rich with Mormons, hard-core Christians and Republicans; you are bound to hear words that can cut deep.

The word “faggot” not only offends my mothers, but it offends me. They have raised me to be a loving person, but also not to tolerate behavior that can offend me, my friends or my family. People who use the word faggot chip away at people who choose to love who they love. Faggot is a word of hate, and it’s something that I won’t tolerate. The word “nigger” insults everything about my family. As Mama Nina would say, we are a beautiful bag of M&M’s. Mama Nina’s Syrian, Mama’s Norwegian, Jordan is biracial and Jayden, Janelle and I are African American. Though in our family we say color doesn’t matter, the word nigger is ugly and is meant to tear people down only because the color of someone’s skin is different. The word fat offends, well, everyone. I’m a big girl and my sister shares my body type, too. I’ve heard her say a couple of times that she didn’t think she was beautiful. And the sad part is, she is beautiful, but I do know that feeling. Living in a town where everyone’s completely different from you isn’t easy. I know now that it isn’t bad that I’m different, but when you’re younger and you’re surrounded by people who claim to be beautiful, it gets you down.

I wouldn’t be who I am without these women. I wouldn’t be a fighter, a helper, a listener or maybe even a writer. I think about the things we have against us like politics and religion. And it sucks, but all I could say is that they just don’t know. People who say kids should stay in foster care instead of being with a same sex couple don’t know. They don’t know what it’s like to not belong, to feel unwanted. My mothers’ love me and I know for a fact that they accept who I am, whoever that may be, isn’t that important? Isn’t that what a child ultimately needs? Screw the fact that my parents don’t fit people’s ideal image of perfect couple. But since I was four or five years old, I’ve been dreaming of the day where someone actually loves me. And I will always be thankful that Mama and Mama Nina had completed those dreams.

Jessy Forsmo-Shadid a young black girl that has two mothers. She lives in conservative Kuna, Idaho and is currently a senior at Kuna High School. You might see her either being a nagging older sister to three, writing under a tree or just simply making funny faces. Life is crazy but she tries to live hers as honestly as possible.

More From Jessy Forsmo-Shadid view all

You can have anything that you want in your life. Whatever you dream, whatever you create,
you can make happen. And keep trusting that because if you do, and you believe it, and you
know it–you brush away all the barriers and the obstacles. You can have it.