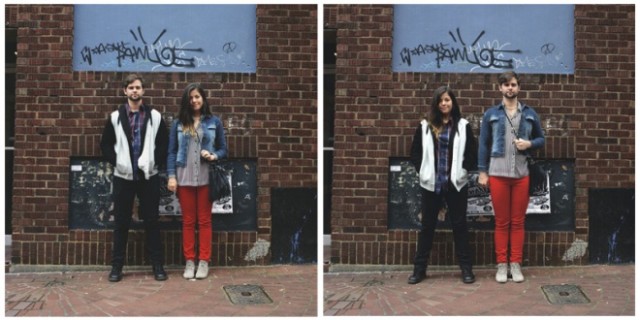 Give Me Your Personality and I’ll Give You Mine

When I first met my future-husband back in college, I thought he was cute – Then he spoke and I thought, “Oh man, I’m in trouble!” He was from England and his accent made me damn near swoon in the UCLA dining hall. He being a Brit, and I being a native Californian, I naturally found him nothing less than exotic. He was so different from all the other California boys I knew. While they were loud and boisterous, always looking to make some joke, he was shy and reserved. There was this twinge of sadness about him, he wasn’t bubbly or carefree, he seemed wise, stoic and mysterious. He was just different from all the other boys I knew, so naturally I wanted to understand those differences.

One thing led to another and we began dating. Of course, it turned out that, despite growing up on opposite sides of the globe, we actually had a lot in common. We liked the same kinds of music, we were both studying literature, we had the same affinity for classic films and, most importantly, we liked each other. But there were definite differences that were intrinsic to our cultures. Now I know you may be thinking that English and American cultures can’t be that different from one another, but trust me, they are indeed.

Little things like a turn of phrase, slang words and pop-culture references had us constantly asking each other, “Wait, what does that mean?” I couldn’t understand how he could be so blasé about a trip to Disneyland, or that he wasn’t able to quote lines from certain TV shows. Meanwhile he couldn’t understand the concept of iced tea and why anyone would want to be able to quote lines from television shows. But exploring these differences was fun. It added a whole new level of getting to know each other – slowly but surely I was taking on insider knowledge into a foreign culture – all from the comfort of my sunny California home!

Beyond our cultural differences (and maybe because of them) we also seemed to have totally different personalities. I was all about being the life of the party – the center of attention. I was very outgoing and up for anything. I wanted to be friends with everyone and I wasn’t afraid to speak my mind – sometimes even failing to sensor myself when I probably should. The future husband was a complete 180 from my persona. He was quiet, and happy to be on his own. He didn’t like small talk, or fake conversations and he always thought before he spoke. He was comfortable staying on the sidelines and observing people – he could read past all their BS and refused to go along with the crowd.

His reserved personality presented a tantalizing challenge for me. I was used to being able to read boys so easily, and he was a conundrum I couldn’t figure out (still can’t to a certain degree.) But as we spent more and more time together, and became closer and more open with each other, all our “differences” seemed to fade away. I suppose they were still there, but they just didn’t matter anymore. We balanced each other out and we understood each other’s strengths and short-comings. I think it was clear that we complimented each other nicely and things just worked between us.

So the years went on and we got married. I guess we aren’t so different from each other culturally, now that he has been living in the states for over 4 years, but in terms of our personalities something strange has happened….We seemed to have somewhat adopted each others mannerisms and personality traits. Over the years, he has gotten more and more outgoing, outspoken and friendly while I have gotten more shy, skeptical and kind of snobby. I over think things now and prefer hot tea with milk, while he has adopted a carefree attitude and a genuine affinity for trips to Disneyland.

I’ve often heard that this phenomenon happens after you get married – You spend so much time with someone and eventually you become just like them. Is this a good thing? Is it healthy? I’m honestly not sure. But if imitation is the ultimate form of flattery than I’d say my husband and I truly flatter each other. We still balance each other out, but now we are on opposite sides of the level.

Part of me believes that adopting each other’s personality traits is really just a product of accepting each other’s differences. You come to understand them and you take them on in your own life. If that’s indeed true than I feel so fortunate that my husband accepted all my little quirks and that I in turn have accepted his….Then again maybe we just pulled a Freaky Friday somewhere down the line. Has that tired, old story line ever been done with a husband and wife? Probably not…It’s too realistic. Either way, the differences really don’t matter as long as we enjoy them together.

You can be yourself and not let what society expects from you control what any of your choices
are. I find a lot of people struggling in their lives because they feel it was expected they do a
certain thing or act a certain way and not follow what their gut is telling them to do.