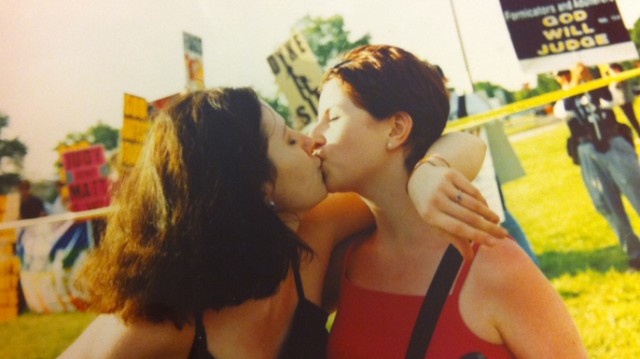 I Kissed A Girl

In 2000, literally just weeks after I’d graduated from college, I took a road trip to Washington D.C. to attend a gay-rights concert called Equality Rocks. I didn’t go to make a point, I went because I figured it was the only time I would see Melissa Etheridge, The Pet Shop Boys and George Michael in the same place. Selfishly, I was just there to have a good time.

Still, on the way in to the concert, I was very disappointed to see a small group of protesters gathered at the gate screaming that we were all going to hell. Worse, they actually believed it. They genuinely thought God wanted them to stand outside an arena and spew hatred in His name.

In an effort to demonstrate just how much they were wasting their time, I grabbed my friend Liz and kissed her hard on the mouth. There was a group of us, so someone captured the moment and when I finally saw the picture (film, remember?) I remember being struck by the combination of our kiss and the huge “God Will Judge” sign in the same frame. Then, I put the photo in an album where it has sat, pressed between plastic sheets, for the past 12 years.

Recently, after reading about the President of Chick-fil-A’s personal stance against gay marriage (and the subsequent media firestorm it caused), I decided to dig out my old Equality Rocks concert photos – and there it was. I stared at the picture for a few moments, chuckling at the memory, but this time I was struck by something completely different. It occurred to me that while everyone is kicking up sand, as usual God has gotten lost in the dust.

But I just chuckled again as I put the photo – and the memory – back in its place. Because I know that God is love… and love always wins.

That’s a gift of illness–and there are gifts. I never used to wake up and go–‘Ah, I’m alive today! That’s fantastic! How do we make it the best we can make it?’