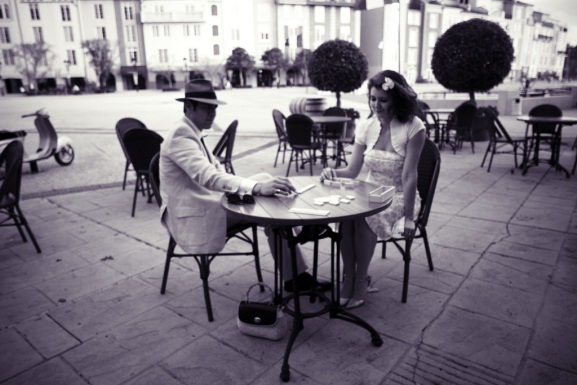 Last of the Monogamous Couples

As I lay in bed with my husband, I asked the question. “Are we the last monogamous couple?” He laughs: “It’s starting to seem that way.”

My husband works in a testosterone-polluted environment. He works with all men and they are always doing what we secretly think men do when they are alone. They brag and they talk about the things they’ve done to one up each other. It’s disappointing, but I always got the ‘stories’ brought home to by my husband. We laugh at them. Still, I have to say there is a certain sadness to these stories we laugh at. Most of them have to do with the men flirting with or skirting the lines of fidelity. Some blatantly have sex with other women, others have open marriages and then there are those with multiple girlfriends that they are trying to keep straight.

Is the one-on-one relationship dead and buried? I always wanted one. I already got bad marks in preschool for not sharing well with others, so an open relationship or swinging was not for me. Maybe I watched too many movies, read too many happy endings, but I wanted someone as devoted to me as I was to them. It was important or I was going to stay single. Settling for anything less was not an option, either. I looked around and I saw the act of monogamy less and less conventional as I moved into adulthood. I even had a previous boyfriend ask me about ‘swinging’. There’s still skid marks in his apartment from how fast I high tailed it out of there after that conversation. One of my friends slept with a married man knowingly, another took back her cheating significant other time and time again, my husband has a friend with an open marriage, my neighbors fight on a nightly basis accusing each other of infidelity…. Where did faithfulness go?

I understand that some people’s needs can be met with multiple partners with boundaries clearly set and agreed upon, and there’s nothing wrong with that. Still, am I the last one who wants the ‘you come home to me and only me’ situation? I want marriage vows like ‘forsaking all others’ to mean something. Yet it seems that everywhere I look, there are people bending the promises they made to someone else in favor of something different or more exciting. Meanwhile, I still get excited to see my husband every day after work.

Fortunately, my partner in life is an agreement on this. When you come from a family where infidelity was an issue, you get sick of the separate birthdays and Christmases because someone has an ax to grind or just can’t forgive or forget. He got sick of it early on and I was looking around and finding less and less to relate to with people around me. It culminated when another friend of mine broke off with her fiancee for a ‘break’ to sleep with another guy she was ‘curious’ about, only to get back together with her fiancee two weeks later.

I know I’m probably old fashioned. Still, I must say that I drink, swear and lost my virginity without a thought to a wedding ring – so I can’t be that old fashioned. Is monogamy becoming a lost value? Is it similar to a rare painting from centuries ago that we admire, but its style is too outdated to ever be replicated? My frustration with this is becoming that I have no one to relate to. Still, it shouldn’t matter. I got the relationship I always wanted with devotion, love and only one person’s name to remember. So, I’ll take my values that might make me a bore, a prude or a hundred other words that mean I’m 27 going on 80 and just be satisfied with my life. Not everyone has to agree with me, and I can learn to be perfectly comfortable with being the novelty of the conversation with drinks with my girlfriends when I talk about my one man who has his one woman. I’ll make my old fuddy duddy way straight to the history museum.

Tiffany is 27 years old and continuing her education so she can become an elementary school teacher. She's happily married since July 2011. She moves around the country for her husband's job so she finds work as a substitute teacher. Currently she resides in Kansas City, Missouri. She grew up in Michigan, home of the American car, and has a soft spot in her heart for classic cars since she watched them being restored her whole life. She has two dogs that she rescued and they are family at this point. She loves writing and has not stopped keeping a journal since she was ten. As a person living with three Anxiety Disorder, she is constantly trying to advocate for those she knows to be screened for any mental illness and get help. She would like to aid in ending the stigma around mental illness. It is not all that we are. You can follow Tiffany on Twitter @TiffanyBadal.

More From Tiffany Badal view all