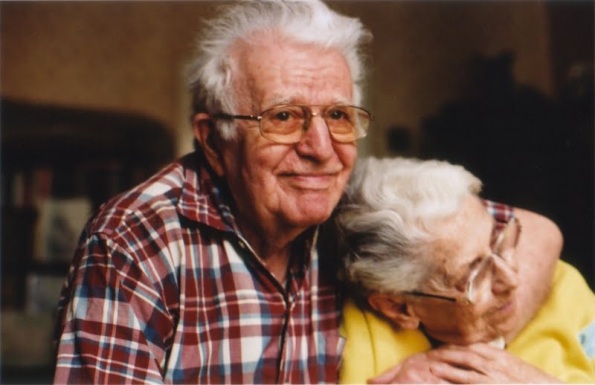 Each one of my grandparents’ deaths affected me viscerally. Each one had a palpable, physical affect on my life, my body, and my sense of direction. Of course, you can’t actually tell someone how much their death impacted you, though knowing my grandparents, they would probably just feel guilty and tell me to stop making such a fuss, find a nice boy, and ask if I’m eating enough because I’m looking kind of peaky.

When my father’s mother died, I was living in New York. My father’s number came up on my cell phone while I was at work, an instant giveaway. I hesitated but knew that either way, whatever had happened would still be real whether or not I acknowledged it. She had died in her sleep, in the apartment she shared with my grandfather in Budapest, where we had moved to California from over a decade earlier, and where we would visit twice a year. She died next to her husband who was as heartbroken as any man can be after losing the love of his life. My mom and brother were there and waited with him until the coroner came, sometime in the middle of the afternoon. There was no funeral. Their wish was to be cremated and for their ashes to be spread together, and so she spent the next five years sitting on a shelf in the living room cupboard, waiting for my grandfather.

A few months later I decided to leave New York. A restlessness had taken over me, an urgent need to uproot and enjoy transience, not realizing for years why. I moved from city to city, traveled endlessly, reveling in days-long train rides and road trips and bus trips across the UK. It didn’t occur to me then that my need for movement wasn’t feeding a craving, but an outlet for how lost I felt. I had known for years it would eventually happen, but with the loss of my grandmother I had begun what would be an inevitably hard slog through years of waiting, worrying, and finally losing not only my three remaining grandparents, but the life and stability their worlds tied me to. When you move halfway across the world at the age of ten, going to grandma’s house takes on an extra layer of comfort and significance that buries itself deep in your being.

My mother’s mother had an unfair death. She was a brave and brilliant woman who had ripped the Jewish star off her building in 1944 and refused to move into the ghetto when ordered to. My brother spent years interviewing her based on her old journals and compiled her words, old and new, into a two volume memoir. She was so surprised and so pleased to see that the family read it with interest. I’m glad she could still be around to feel appreciated, because the lack of senility that she prided herself on until the age of 89 got turned upside down in eight months of deterioration that hit all of us hard. She was confused, scared, and as her mind failed her, her body followed.

I was sitting in my room in Austin, TX on a March afternoon when my heart felt a bizarre clench. The best way I can describe it is someone reaching into my chest and squeezing it, and as it happened, I felt the essence of her presence for a brief moment. I made a mental note of the moment and time. Years later my brother said that around that time, he was spending the night at my grandfather’s where he couldn’t sleep, and nor could my grandfather for strange, unsettling dreams. Both shared a moment of discomfort, feeling something had happened. The next morning we all got the phone call — they from the hospital, me from my mother. She had died in her sleep. The funeral was traditionally Jewish. I watched myself from somewhere nearby, watching my mother stand by the grave as her mother was lowered into it, over her own mother’s coffin — four generations, the newest one hoping against hope that I would be ready to step into my mother’s place by the time it would be my turn to stand there.

I spent a month that summer with my grandfather who, for the first time in my life, conversed with me as an adult. He talked about his feelings, how much he missed her, how depressed he was. We talked about life choices, people, religion, serious things like serious people. He saw me as an adult. A year later he was living in a hospital, having tripped and hurt himself at home enough times to need the safety of a nursing staff. When I went to Budapest for my best friend’s wedding, I ended up spending the two weeks visiting him as he unknowingly succumbed to lung cancer. He was frustrated and depressed in those weeks, a weakening old man and not the grandfather whose memory I guard. I extended my trip and my mother flew over — he died 11 hours before her plane landed. The thought of my mother crying alone in an airport bathroom while waiting for her connecting flight is without a doubt the most painful one I’ve ever had.

His death was very intense for me. I had caught a stomach bug a few weeks before and after he died, it snowballed. My entire inner balance was thrown off, no doubt reflecting more than what was happening physically. He took with him their apartment, an entire chunk of my life that held security and comfort within walls that were saturated with textured memories. I miss the view from the bedroom windows, the smells, the way the air wafted through on a breezy day. It broke my heart a little bit, how I had no choice but to never have that place again, how empty it was without its owners, how unfair it was that both of them had suffered so much into death.

But my father’s father was still alive and in good spirits, albeit alone in his old age and with a family living mostly overseas. My dad visited him every chance he could, and we still went to Budapest every summer and every winter. This past December he wasn’t doing so well. His heart was weak and he was headed for months of bed-ridden suffering, as my dad told me on my visit to my grandfather’s after I arrived. The next night was one of the most incredible of my life.

I stopped by to see him before heading home for the night. I walked in with headphones on to find his live-in nurse in an anxious frenzy. He was unconscious, she was sure this was the end. My heart hammering in my chest, I called my dad, she called an ambulance and I went in to be with him. No way was I letting him do this alone. If this was really happening, I had no choice and I was ready. I sat with him, spoke to him, rubbed his hand. We heard the sirens downstairs, and the nurse left the room to let the paramedics in. He stopped breathing when it was just the two of us in the room, the oldest with the youngest. He shared that moment with me, a vote of confidence and induction into adulthood if ever there was one.

Everything felt right that night, like things had fallen into place with purpose and peace. He looked very calm and I think mostly he just fell asleep. He died in his bed, softly, having waited to see the family. He died in his bed, next to where my grandmother had five years earlier. The paramedics revived him while my father and brother watched, giving my dad chance to day his own goodbye. After a year and a half of the illness exacerbated by my other grandfather’s passing, I suddenly felt a calmness and knowledge, like warm honey, spread from my head to my toe, that I would finally heal and be alright. His and my grandmother’s ashes traveled downstream together near their old vacation place, a place they loved, after his memorial. My dad and I talked a lot over the next few weeks. We’ve always been close, and we were both lucky to have each other.

Losing people is hard. It just is. But death itself isn’t always a terrible, fearful thing. The suffering that can lead up to it is the hardest part. What I felt in seeing my last grandparent leave was something personal, intangible, and palpably meaningful. For months people have reacted to news of his death with words of “I’m so sorry” and I just smile. It’s what people say, right? But there isn’t anything to really be sorry for. He chose his death down to the exact moment. He was ready. It felt as if the peacefulness and sense of purpose I experienced while with him was his parting gift. Death is a form of peace and loss is only physical. Internally, I can revisit people and places whenever I want, it’s my own mortality that imbues the memories with an undertone of pain. I can only hope to come to terms with that by the time it’s my turn to go.

Julia Gazdag is a writer, photographer, and breakfast taco enthusiast. She hails from Budapest and has lived in New York, LA, Austin and Portland, currently residing in the general Planet Earth area. She is also quite fond of dinosaurs. You can find her on Twitter @juliagazdag and Tumblr. Her photos can be found on juliagazdag.com.

More From Julia Gazdag view all