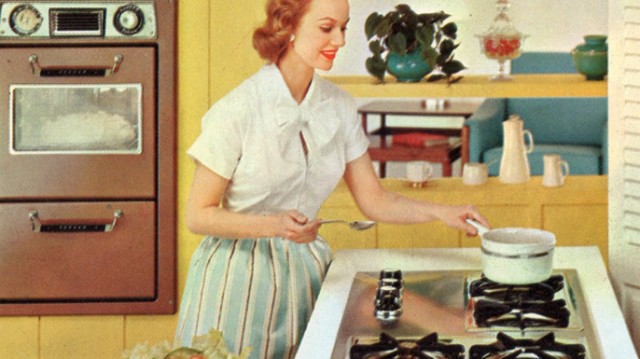 When I was a bit younger and slightly more optimistic, I believed in marital instinct.  Similar to the well-known maternal instinct, marital instinct is like a subconscious force that kicks in right after you say “I do”.  It gives a new wife unexplained marital knowledge and the ability to do all kinds of domestic things – regardless of whether or not she had any experience with them prior to walking down the aisle.  I imagined that once I got married, my marital instinct would initiate and suddenly, certain things would just come naturally to me.

Through instinct, I’d be able to multi-task to the billionth degree, I’d become extremely financially responsible, I would always remain calm; I would instantly know how to get stains out of every kind of fabric, I’d know how to hem a pair of pants and I’d never again have feelings of self-doubt.  Why should I?  I’m a wife!  It was naïveté at its very best.

It wasn’t long after taking my vows that I realized I’d been fooling myself.  Life didn’t get easier after marriage – it got better, but not easier.  It became abundantly clear to me that marital instinct didn’t exist.  Like a fairy tale, it just wasn’t real and like The Great Pumpkin, it certainly wasn’t magically appearing to me.  I reluctantly accepted that, but not before I dealt with some decent sized delusions about what my role as a wife entailed.

I think the most deluded image I had of myself, was the one in which I magically became a magnificent cook.  Now, I realize that it’s not the 1950s and there is no obligation for me to bake a killer casserole to prove my worth, but still, there was something inside me that made me assume I could.  Imagine my surprise when I tried my hand at cooking for my husband and found that not only do I kind of suck at it, but I also really don’t like cooking.

I hate chopping and I have this strange, inexplicable resistance to following recipes.  Everything I make, while perfectly fine to eat, consistently comes out bland regardless of how much salt I pour into it.  I have a strong fear of salmonella, so I can’t seem to help over-cooking everything, and since I hate washing dishes more than I hate cooking, I avoid any meals that require multiple pots and dishes.  This can be very limiting.

So the truth came crashing down on me after getting hitched – matrimony doesn’t equal mad skills in the kitchen.  I was completely disappointed.  The worst part of this realization is that my husband possesses a rather developed palate.  He wasn’t happy to settle for frozen pizzas (no prep and easy clean up) or a steady diet of bland pastas and stir fries.  No, he being raised in England, wanted vindaloo (fun to say, no idea how to make it) and venison (yep, Bambi) and a variety of other complicated dishes, many of which I had never heard of.  I couldn’t live up to his expectations, so eventually he figured it out for himself.

My husband proceeded to become a wonderful chef.  He taught himself everything he could about sautéing, chopping, marinating and  seasoning.  His dinners are to die for, and he genuinely enjoys coming home and cooking after a long days work.  He watches Gordon Ramsey’s kitchen shows with the same zeal most men only reserve for Monday Night Football.  Cooking has become a kind of passion for him.  Likewise, I like coming home after a day’s work and having something to eat – it’s win win!

But for a long time, I couldn’t shake the feeling of disappointment each night as I watched him cooking up a storm, so happy and confident in his ability to churn out yet another delectable dinner. Why couldn’t I do that, too?

Over our first year of marriage, I found myself actually getting kind of mad at him.  How dare he show me up in my own supposed element!  My resentment began to build until finally I decided to do something about it.  I spent two weeks refusing to let him cook, desperate to prove that I could be a master in the kitchen, too.  I went on MarthaStewartDinners.com and planned a myriad of meals that were sure to impress.  I went grocery shopping all over Los Angeles, determined to find only the best ingredients.  The whole process took the better half of a weekend and I nearly got into a fight over bok choi at Whole Foods (long story), but I was convinced it was all worth it.  This was going to be my chance – my chance to be a better cook than my husband.  And I was ready!

I wish I could tell you that my experiment was a complete success, but alas, everything I made was a disaster – burnt, dry, too sweet, too bland, you name it.  And yet my darling husband choked down every bite I gave him.  The more he said he liked my food, the more upset I got.  And I only continued to get more and more frustrated until finally my determination gave out, and I ended up crying on the kitchen floor.  Not my finest moment.

I realized then that it wasn’t the cooking I was upset about, it was the label I associated it with: WIFE.  If I wasn’t a good cook, somehow that meant I was less of a wife.  And why?  In this day and age, why could I not just let that go?  As my husband handed me a box of tissues and began cleaning up the mess I had made on the stove it hit me: He wasn’t worried about filling his role as “Husband” and I shouldn’t worry about filling my role as “Wife”.  Because what are those roles but unspecific ideas we’ve cultivated from the movies we’ve seen and the people we know?  They aren’t real and they don’t have to define a relationship.  I can admit that a great deal of my ideas about marital instincts came from my affinity for Doris Day movies – not really the kind of thing to base your identity on.  My preconceived notions can never encompass who my husband and I actually are and what it really means to be a married couple.  After all, we may be husband and wife, but we are still just us, flaws, shortcomings and all… And that’s a good thing.

So I figured out that while I may be a horrible cook, there are plenty of other things I bring to our marriage, among them my stellar ability to find super cool second-hand furniture (just one of a plethora of super powers I possess). I’ve let my husband completely take over the kitchen now and we are both better off.  It has become his space  (a place where he can pretend he’s Gordon Ramsey) and he likes it that way.  And I’ve learned that even without marital instincts,  I can contently watch my husband cook, enjoy his delicious dinners and take joy in the fact that I don’t have to ever brandish a skillet – Marital bliss!

If you’re having trouble being bullied or finding your place, just know that all you need is one
person to believe in you. Just one friend can change your whole life.