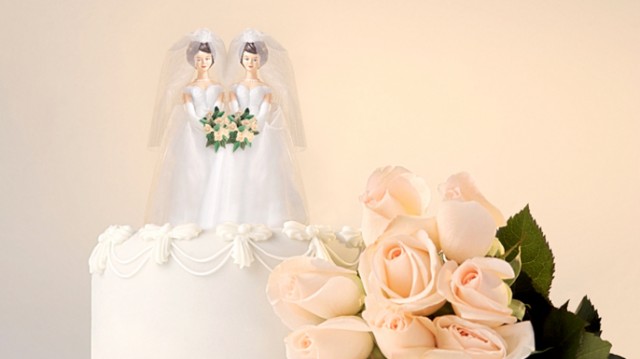 Marriage: In General And In Gay

I suck at relationships. Which, I think, is something that many of us single women say. Likely, when we find ourselves in the right relationship, we’ll see that we suck a little bit less at them than we’d previously thought. In the meantime, it’s easier to attempt to come off like a bad ass who doesn’t care about being single, by grabbing a bull horn (from a college team mascot or a leader of a very large march, otherwise, I don’t know where you get one) and announce, “I suck at relationships!”

We’ve established that there’s no future Mrs. Jill Kushner, at this very moment. However, if and when I meet her, getting married should only be up to me. Well, and her. Fine, and maybe my sister. But, that’s it. It should certainly not be up to my government. Believe me, I don’t want a say in their marriages, either. I just want a say in my marriage. Because it’s really so simple. It’s really all the same.

My home state, Maryland, along with Washington and Maine have just legalized same-sex marriage. Minnesota voters rejected a proposed amendment to ban gay marriage. There are now a total of 8 states where gay marriage is legal. This year’s newbies join: Massachusetts, Connecticut, Iowa, Vermont, New Hampshire and New York. This is huge. And exciting. And groundbreaking. And, a little sad. Because it’s really so simple. It’s really all the same.

When two people are in love and decide to take the next step, marriage, not only do they want to shout it from the treetops (I’ll want to shout it from the bases of the trees, because I’m not big on heights) they also enter into a contract with each other. And, it’s pretty sacred. Marriage is a big deal. It’s the biggest commitment two people in love can make to each other. And if you love someone enough to marry them, you better damn well be able to walk into a hospital, that they god forbid may end up in, and visit them.

Come on, people. We are fast approaching 2013. This is no time to act like cave men and mess with civil rights. Here are just a few of the things going on right now: Someone has invented Augmented Reality Contact Lenses (Randy Sprague) which means people will have the ability to look at something and then access further information about it because data can be superimposed in your field of vision. The first commercial space tourism flight is approaching (next year on Virgin Galactic).

Of course, my long time crush, Richard Branson is behind this. And, for god’s sake, we can make our own fro-yo on like every block. Like I said, we are fast-approaching 2013. This is no time to act like cave men and mess with civil rights. We are moving forward.

Jill Kushner is an Emmy Award winning writer. When she's not writing and producing TV, Jill writes and produces videos which is where she makes the really big bucks. Hold for laughter. Jill is a stand up comedian and writes a weekly column for HelloGiggles. Except when she can't think of anything to write about. You can follow her on Twitter @TheJillKushner.

More From Jill Kushner view all

I identify as a feminist. I have so many feminist beliefs and then I’m so mean to myself about my body sometimes. The weight thing–I feel like it’s the last frontier of feminism.