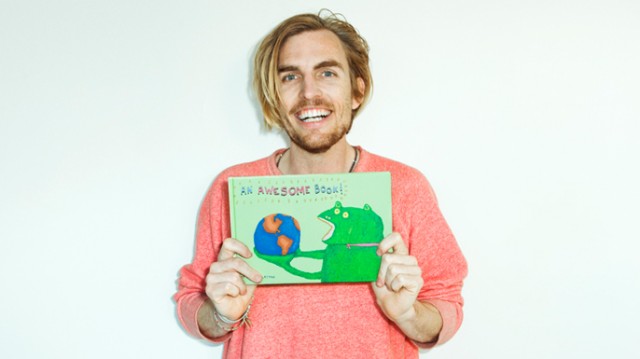 I kept hearing about Dallas Clayton from different friends in my life always saying the same thing, “You have to meet, you’ll love him!” Indeed they were right, we met and I instantly wanted to read all his books and know more about him. Who doesn’t want to read hopeful, positive stories to their kids that are written by a Dad and illustrated with artwork  a grown up can appreciate. He’s also a total entrepreneur who didn’t take no for an answer. He went out and made his own books because he just wanted to share  his books  with his friends.

Dallas is giving away copies of his current book because he’s just that kind of guy. Check out his website to learn more.

Wow… you make a lot of stuff. How many hours sleep do you get and what supplements are you taking?! Seriously, please tell me how many books you have written, created and published in the last five years.
Ha! I do love making things. Ultimately I guess I love making things more than I love sleeping, which maybe is what defines a lot of creative people and perhaps drives them crazy later in life. At current I have two books that exis in the world “An Awesome Book!” and “An Awesome Book of Thanks!” and two new books coming out over the next two months “Make Magic! Do Good!” in November and “An Awesome Book of Love!” in December. After that I have three more books coming out next year, and probably five or six more books I’ve already written that I’m waiting patiently to put out. Next year will be year four of my career as a book writer/story maker so that’s seven books in four years. WHOOOOA! That’s nuts!

My belief is if you can make a job out of doing something you love then its not really work. Tell me how you came to making your first kids book- what inspired you?
Well I have a son who I love very much, and like most parents, especially young parents, when he was born there was a huge shift in my mind, life, core, priorities, etc. I had been writing for a while off and on but once he was born I became compelled to tell a story that I felt he could have for the rest of his life. So I wrote a book about the idea of having big amazing dreams and never giving up on those dreams and using those dreams to change the world, just like my son changed my world. I called it An Awesome Book!

Why did you self publish? Should more people consider that?
Originally it wasn’t my intention to self-publish. I first wrote the book and naively expected that I would be able to put it in the hands of publishers and they would print it and share it with the world the next day. This was not the case. The publishing industry is very old and very insular and very set in its ways. Especially the children’s publishing industry. So I basically got turned down by every publisher I submitted to, and the process of submitting books and waiting to be turned down took so long that I just decided it would be faster and easier and also more personally gratifying to make the book myself. Fortunately for me, people took to the book and it went on to become quite successful, and as a result all of the publishers who turned me down (and some I hadn’t even spoken to in the first place) came calling once they got word of the success and now I’ve been able to experience both worlds– self publishing as well as working with huge publishing houses. So I’m in a pretty unique position which is rad.

What significant thing have you learned through the book publishing process?
I’ve kind of always used the record industry as a good model for the different paths toward success, or toward sharing your art with the people. There’s the pathway of signing with a major label right out of the box and letting them use their muscle to broaden your reach, and then on the flipside there’s the pathway of getting in the van and touring the country and building your audience. If you have the opportunity to get in a van, and meet people and see the world and build things organically I suggest you take it, because you will learn a ton about yourself, and what it means to create things and share them and also what it means to be a artist. In that respect publishing is no different than making music, or food, or furniture, or clothing – it’s about doing something from the start that you believe in enough that if everyone around you vanished you’d still be doing because you think it is important.

When you visit schools around the country and read do you go on a bus like a touring musician?
No buses yet, just touring vans and airplanes. I have the luxury of being only one guy with virtually no equipment so a bus seems like a bit of overkill at this point. However, as what I do expands and the performance aspects of it expand to include other artists and musicians and amazing people making things for kids I’m sure there’s going to be a bus or two required.

Do you have “Awesome Book Groupies” and do you get hit on by mothers at your readings?
There is no way to answer this question without sounding like a jerk, is there? Let’s just say that I don’t fit the same mold as traditional kids book authors who are usually much older, much quieter and often times women. I’m running around, jumping off of stuff, painting stuff, hugging people, getting into trouble, being ridiculous and having fun with my friends. I definitely don’t look like I belong in a library in a rocking chair. So to put me in a room full of younger, progressive single moms is certainly to stack the deck in my favor. That said it’s not actually something I try to think about. I’m really just trying to make friends with everyone, share ideas with everyone– men, women, kids, grandparents, teachers, doctors, dogs, cats and giraffes.

How has being a father changed your priorities?
In many ways I think it has made me the best version of myself. It has allowed me to recognize a life that is small and personal and focused on the issues that happen within the four walls of my house and at the same time geared toward providing for and participating within society on a larger global scale.

It’s easy, when you don’t have kids to put yourself in the priority slot to think about how important you are, or how important your job is or your ideas are, and there’s great value to that even from an evolutionary perspective, but having a kid immediately dilutes that narrative, turns it on its head in fact. Having a kid forces you into a position where often times you are not the number one priority. I think this is a powerful lesson because realistically we are all in this together. The more give and take we can create, the more fluid we become as artists, as workers, as teachers, as humans, the less likely my son or all the other future generations are to have to deal with some of the ultimately headstrong nonsense that has kept us in the dark for centuries. The less likely we are to be living in a world where “you’re right and I’m wrong,” instead we are creating a future where we are both right sometimes, and both wrong sometimes, but what’s important is we figure out how use those differences to learn to progress together.

What would you tell your 14 year old self?
Learn to surf NOW. Buy a bunch of funny domain names like Twitter.com, and Facebook.com and Pizza.com. (they only cost like $10 each and you’ll totally thank me later). Try not to hurt people’s feelings so much- just because the music you listen to is loud and obnoxious doesn’t mean everything has to be so “fuck you” ALL the time. Hang out with more old people and learn things from them, they won’t be here forever. Make way more mistakes, as many as possible. Everything is going to be rad. Keep up the good work!

What is the most desirable quality you seek in a partner?
Just someone who “gets it.” You know that feeling? It doesn’t even have to be in a someone you are looking to sleep with, just that idea of meeting someone for the first time and immediately knowing they get it. No explanation, no rule book, you’re both there from day one totally in on each other’s jokes totally aware of how great of an adventure it’s all going to be. Magic, maximum magic.

We need a girl-focused cartoon, do you have one?
Developing content for young girls has been a huge priority of mine, more to the point developing content that isn’t gender specific at all. Everyone’s invited! I have a few film and tv pieces moving right now with various production companies, but one in particular I’M SUPER excited about is called The Little Girl’s Imaginary Monster Club. It’s about four little girls, who’s imaginary friends get together while the girls are at school and they host an imaginary friends talk show dealing with all the issues of being a little girls’ imaginary friend. I think it’s going to be amazing. Ridiculously amazing.

I kept hearing about Dallas Clayton from different friends in my life always saying the same thing, “You have to meet, you’ll love him!” Indeed they were right, we met and I instantly wanted ...