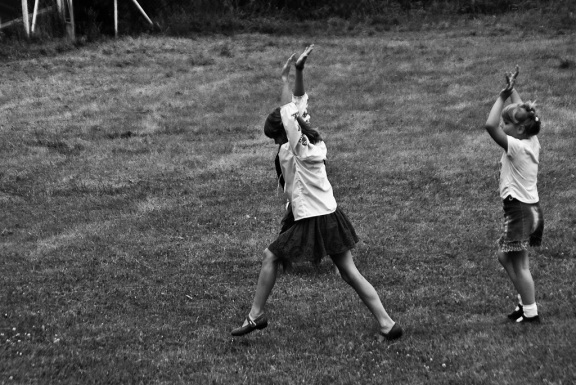 On Raising Our Daughter to be Happy

The thing is, I never really felt the need to be a father, to have kids, to change a life and a partnership with my wife that was amazing and missing nothing.  I thought maybe we should just get another dog, but wasn’t able to convince her of that.  Then our daughter was born and BANG, everything changed.  She’s now 6 years old and along with her 5-year-old brother, she’s changed the way I look at the world, walk through the world and what I want from the world.  That’s not bad from someone who got out of diapers not all that long ago.

It took us 8 years to have a baby, which was plenty of time for our gestation as parents – even for someone like me who needs remedial help in most other parts of life.  Along the way, we had plenty of time to define what it is we wanted to do and be as parents.  For us, it was as simple to say and is as hard to do as raising children who are capable of pursuing their own bliss no matter how they (not we, they) define that bliss.  All we want is for them to grow up and be happy…which I guess makes us like almost all parents.

But as I became the father of a daughter, I began seeing the world, even our privileged one, through the eyes of a girl – and I did not (and I do not) like what I saw.  If her happiness is the goal, all I could see – all I can see – are the roadblocks and buzzkills on the road between here and there that keep popping up like so many whack-a-moles.

Suddenly, everywhere I looked – so many of which were the same places I’d been looking at without noticing that anything was wrong for so long – I saw judgments, expectations (not the healthy kind), cultural ideals, standards and so-called norms.  I saw “boys being boys” provided as reason (not just an excuse, a reason) for unacceptable behavior.  I saw double-standards, inequity, inequality and a never-diminishing supply of things that could sit like an albatross around the neck of her happy.

In and of themselves, some of these things didn’t seem like that big of a deal.  Together though, the cumulative effect of all these things seem like a big deal.  In fact, they seem like a big-effing dragon standing in the way of what we, as parents, want for our daughter.  Suddenly it seemed like these norms, ideals and expectations (to say nothing of all of you and each of the Republican nominees) were co-parenting with us, helping to raise our kids for better or worse and whether we liked it and wanted it or not.

And the thing was, I didn’t and don’t see the same pressures, the same forces threatening or encroaching on our son in the same ways.  Don’t get me wrong – there are plenty of pressures and it’s worse for boys than it’s ever been… but speaking generally I think it’s still better and still easier. Not good and not easy, but better and easier.

So I began to wonder what a father, the father that was me, could do to raise a girl in today’s world with the best shot she could have at growing up and becoming a truly, madly, deeply and sustainably happy woman.  What could I do, we do, so that she would esteem herself enough to let her freak-flag fly, even if she decided it wasn’t very freaky at all.  As it turns out, I pretty much figured there were two things I could do: one, try and change the world and two, raise her with these things in mind.

1.  Beauty matters, for sure – but beautiful isn’t just about the outside. I tell our daughter she’s beautiful all the time.  She is.  But that she’s beautiful always follows that she’s smart, kind, curious, generous and giving.  We teach her that mistakes and failure are inevitable and can also be beautiful in their own way.   We’ll try and teach her that feeling good matters more than looking good – even when they’re linked.

3. Speak your truth.  Always.  There’s a Naomi Wolf quote that has become the mantra of our home…”The only thing harder than speaking your truth is not speaking it.”  We’re trying to raise our children so that they always feel they have the permission to (productively) speak their truths – big or small, whether we like it or not.

We want her to feel good about herself, and sometimes that means giving herself the permission to feel bad about herself.  Feeling bad, frustrated, disappointed and all other kinds of things most of us try and avoid feeling, are an inextricable part of being.  She needs to feel them, honor them, express them, deal with them and then decide what she wants to do with them.

4. Don’t let anyone else hate on your happy.  Which also means don’t hate on anyone else’s happy – just because whatever it is doesn’t work for you.  If they’re not getting in your space or face, who cares what they like?  And don’t worry about what they (whomever they are) think about what you like.

5.  You be you and I’ll be me.  We’re all flawed and we’re all different and in that lies a permission and an obligation. The permission?  You be you.  The obligation?  Let everyone else be themselves.  We’re not going to like everyone or be liked by everyone.  And sometimes that will hurt, but from hurt comes healing and strength.  Cliche?  You bet, but true, too.

6. Sometimes, the fairytale is just a fairytale.  Our daughter doesn’t care for princesses, pink or things of that ilk.  Which we think is fine and well – so long as that choice has been hers and not ours foisted upon her.  We think it has (especially since her brother likes both), and yet still we work to teach her that sometimes the fairytale is just a fairytale and that only Kate Middleton grows up to marry a Prince.  Our intent is to let her embrace fairytales and archetypes if she wants to, but also to recognize them for what they are…fairytales that don’t usually come true and stereotypes that are just that.

7.  Be open.  We try and teach her to have an open-mind and an open-heart, to live in the present and be as without unnecessary judgment as she can be.

8. Comparisons suck.  That old rough-rider himself Teddy Roosevelt said, “Comparison is the thief of joy.”  This will be among the easiest things to explain and the hardest to get her not to do – because we all do it. And it rarely serves any of us well.  “Compare not” joins “judge not” and “speak your truth” as commandments at our house.

9. Finally, we’re trying to teach her to love herself – as we do her – unconditionally.  Liking, ourselves and each other, may be conditional and circumstantial. But unconditional love is always that.

Seth Matlins is the founder of Off Our Chests, a brand and Intellectual Property development company.
comments (1)

As we get older we go on a path. And we don’t understand when it’s happening, and all of the sudden, connect the dots and it all falls into place.