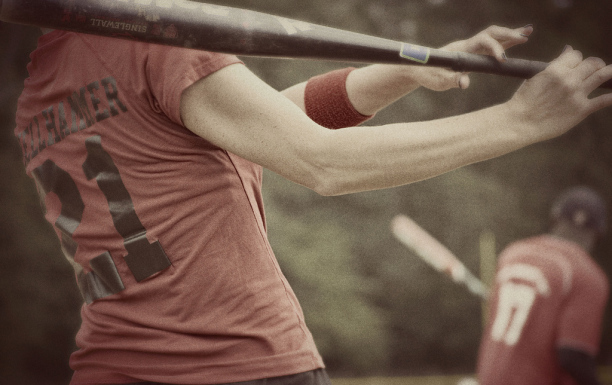 I was thrown a curveball. It’s that simple. Life has always been a game that I felt I excelled at, an event where my goal would, undoubtedly, come into fruition. There may have been times when the coach pulled me out and I had some thinking on the sidelines to do. Some periods where I had to reformat my game plan to make sure I was put back on the path to a strategic win. But, regardless of the time outs, the intense practice, the actual game days or my teammates, I always felt like there was a direct correlation to the amount of effort I put in and the results I received. So when the past two years turned my otherwise stable life into one of foreign turmoil and uncertainty due to my failing health, I began to realize that I couldn’t strategically control my next move. The game continued but I was no longer in play. I was in the stands of my own life and the game that played out before me, win or lose, had nothing to do with how hard I cheered from the sidelines. I was plucked from the seat of control.

So, then came the questions of, ‘Do I continue to sit at this game just watching? Do I want to witness others’ homeruns and base hits? Do I want to smell the scent of the field but know I have no chance of feeling my feet in that dirt, the sweat on my brow? Do I want to feel this ache to play and know it simply cannot be quenched?’ At first, the answer was no. If I couldn’t participate in life the way I had always done, the only way I knew, I didn’t want to participate at all. How dare life dangle a carrot so close but tell me point blank it was out of reach with, perhaps, no possibility of it ever being IN reach. I wanted that carrot GONE. I didn’t even want to see a speck of orange in front of me. I didn’t want to see everything I could have but was not being given a chance TO have. The term torture comes to mind.

But deep down, there was this voice. This voice said ‘DO NOT LET GO’. It chided me. It goaded me. It said, ‘You’re stronger than this. This game doesn’t make you who you are. You are more than this. And, if you hang on strong enough and tight enough, you may even be able to play again. You may even decide you are meant for an entirely different sport.’

Instead of focusing on the sense of panic and urgency that comes so naturally along with a sense of loss and need for resolution, I want to talk about listening to that inner voice that tells you to keep hanging on. With that voice comes the opportunity to persevere. That voice doesn’t feel like you sometimes but it IS you. If I’m unable to be the star athlete, or any athlete at all, then is there something I can find joy in that still allows me to be part of the game (read: life). If it takes my inner voice to shout that repeatedly to me then that’s alright. It’s my job to listen. THAT is what I have control over. Yes, I’m in the stands and, yes, I am very limited but am I going to be told I absolutely cannot participate in life at all? The answer I came to was a forceful no.

If I couldn’t play and I didn’t have the ability to affect the outcome with my cheers, maybe I could keep score. Maybe I could take a little pencil and analyze the game that played out in front of me. Maybe I could take the years of practice and knowledge and apply it to breaking down the techniques of the game. I may not be able to affect this particular game in front of me but maybe the little kid next to me in the stands would be willing to listen and he or she could take that new learning and apply it down the road. I didn’t have to protest the game or stomp off because I was ‘ejected’. I needed to find a way to contribute in an incredibly altered way. I had to get creative. And with that creativity, came a sense of hope. I was keeping my strategy sharp. I was paying attention. I was motivated to participate in some way. Sure, physically, I wasn’t able to keep up but that was something I had to accept. With the knowledge that I could contribute in even the smallest of ways, it was enough to give me the hope that I would eventually be able to contribute in larger ways. Maybe I wouldn’t be in the stands forever. Maybe I would eventually get back on the bench. Or maybe I would decide that it was time to move on and my new skills were better suited elsewhere.

In fact, my voice likes to remind me of the latter. It likes to tell me that this all is happening for a reason and, even though it’s hard to see it now, there is a new game awaiting me. It’s not directly around the corner but it’s there. I still have to put in work to get there, too. Can you believe that? My voice reminds me of it. I have to have faith that the small efforts, the baby steps I am capable of now are leading me to an unknown but fortuitous outcome. Without that voice, I wouldn’t be so sure.

The point being, even though I felt I was kicked out of the game of life, I know I wasn’t. That voice told me otherwise. What I chose to do with that feeling was either going to defeat me or motivate me to change my wants to better suit my present situation. In many ways, my sharing on this site is a form of this. It’s my inner voice speaking up louder and louder. Actually, every woman sharing on this site is a form of this. We are sharing what we’ve learned through our time. It’s a different experience for everyone but, the results, they are ALL worth sharing. How do we know this? Our voices told us so.