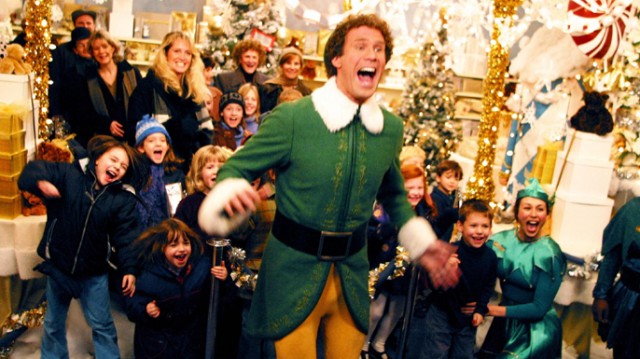 ‘Tis the Season for Holiday Movies

It’s that time of year again. Once the last bite of turkey is eaten on Thanksgiving day, I finally allow myself to break out the red and green, start singing Christmas tunes, and pop in those Christmas movies I wait all year to watch. From classic tearjerkers to comic gems, who can resist a good Christmas flick? We can all recite our favorites as we watch them year after year. Here are some of my personal faves. Elf
Elf is just a baby on the list of Christmas classics, but it deserves a spot on the top. It is sweet and funny and includes tons of memorable moments and quotes. This is the perfect movie to watch as a family. Filled with both silly visual and sophisticated satirical comedy, it will appeal to kids from one to ninety-two. You can’t help but smile while watching Will Ferrell’s interpretation of Buddy the Elf figuring out his way through NYC. And somehow he makes it seem almost possible (I always sing along at the end, just in case). Love, Actually
I think this is quite possibly the sweetest movie about love ever made. It touches on so many different kinds of love – The love between friends, the love between a brother and a sister, the love between a father and his stepson, new love, old love, forbidden love, impossible love – Are you feeling the love yet?! This movie shows several different story lines intermingling throughout the film. With an amazing soundtrack of Christmas classics and set in England at Christmas time, Love, Actually makes me want to speak in a British accent, hop on a plane to the United Kingdom in a Burberry scarf, and eat some figgy pudding on the way. Home Alone
Who hasn’t accidentally left their child behind when they’ve gone on an international Christmas vacation? Whose child hasn’t defeated two professional robbers by setting booby traps all over the house?! Even though this movie could possibly be more far-fetched than Rudolph, we buy it because we love it. It is also cast with some of my favorite actors. With the hilarious Catherine O’Hara, the genius duo of Joe Pesci and Daniel Stern (who, by the way, was the voice of Kevin Arnold on The Wonder Years? Fun fact in case you didn’t.), the adorable, fresh-faced Macaulay Culkin, and even a cameo by John Candy to name a few, I can’t help but love this movie. I also cannot rush toward a plane in the airport without hearing “Run, Run Rudolph” playing in my head thanks to the McCallisters.

A Very Brady Christmas
I am a sucker for that “very special Christmas episode” of my favorite shows, and also for reunion movies. Therefore, 1988’s A Very Brady Christmas had it all for me. Of course it was cheesier than a Hickory Farms gift basket, but would you expect anything less from The Brady Bunch?! All of the original cast showed up back home to spend the holiday together and overcome their life problems (with the exception of Cindy, who was played by a different actress for this special). Lives were saved with a little Christmas caroling and of course, Alice’s pie. A Christmas Story
I’m pretty sure you can’t have a list of Christmas movies without mentioning A Christmas Story. Thanks to this movie, a one-legged lamp will forever symbolize the merriest time of the year. And everybody knows what will happen if you’re not careful with your Red Ryder BB gun – You’ll shoooot your eye ooout! This movie is iconic, and although it is playing on a loop all day Christmas day it still makes us laugh as though we’re watching it for the first time. I am hoping to check out the Broadway musical version of A Christmas Story this year! National Lampoon’s Christmas Vacation
I am so happy, but also secretly jealous, I don’t have a dad like Clark Griswold at Christmas time. As the well-intentioned father who can never get anything right, Chevy Chase sets the bar for Christmas lights high and the bar for turkey dinners low in Christmas Vacation. It reminds us all that we are not the only ones dealing with crazy family issues around the holidays. And maybe some obnoxious neighbors, too! How the Grinch Stole Christmas
With the Grinch, Dr. Seuss gave us all an alternative nickname to calling anti-Christmas celebrators a “Scrooge.” As a child I loved the cartoon version- I always wanted a roast beast at my Christmas dinners. The remake years later starring Jim Carrey did not disappoint me either. Whoville looked like a magical place. I would trade in my normal nose and hair straightener just to live there. No one knows the true meaning of Christmas more than a Who.

Some of you may be asking how I could leave off Frosty the Snowman. Some of you think It’s a Wonderful Life should’ve been number one. Some of you are wondering why Die Hard isn’t on the list. These are just my top favorites. If I listed all the Christmas movies I love I wouldn’t get the rest of my Christmas shopping done in time! So, now the big question. No, I’m not asking what’s on your Christmas wish list – I don’t even know you! Let’s start with- what is your favorite Christmas movie?!

Santina Muha is a born & raised Jersey girl, that is currently sharing some of her time in LA. She has always loved the entertainment industry, and all things TV and pop culture. Currently she is a writer and an aspiring actress/television host. Her favorite genre in life is comedy, or when a drama is so dramatic it becomes comedy. She was Ms. Wheelchair New Jersey, and loves to show everyone- especially women and children- that no matter what hand life deals you, you can still win the game if you play the cards right. Her favorite person in the world is her dog Rocco and she lovesss fancy cheese plates. You can follow her on Twitter @SantinaMuha.
comments (5)

You need to have manners. Think of manners as the universal language. No matter where you
are in the world, somebody understands ‘thank you.’ They understand a smile. They understand
good manners.