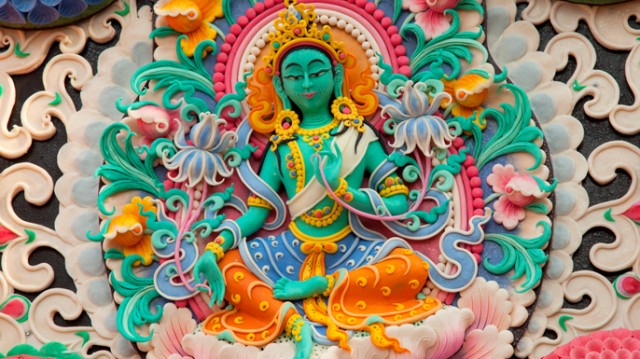 Totally Crushing On The Goddess

Growing up around a pagan Father, goddess paraphernalia and artistic images of the female anatomy surrounded me. Whilst my Mum’s side of things was less graphic, they too were all for Womanpower! Not an easy existence for a near pubescent teenage girl, but a baptism with fire it most certainly was. My rebellion was one involving boys, push bras and an attempted glamour modeling career. But in recent years I am hankering back to the spiritual days of my youth and the lady Goddess who had adorned my father’s temple walls is suddenly asking me to let her in.

I often find myself straddling the world of mysticism and spirituality and the world of face paint, stilettos and “Sex and the City” reruns. Since my first book, The High Heeled Guide to Enlightenment, was published I have been continually living with my spirituality, learning more about it by the day, watching it grow and expand. Surprisingly it seems, that I am returning and drifting back to the Goddess of my youth. Since my teens I have given the Goddess little thought. But I felt her lack. As a woman, as a human and as a spiritual writer I began to feel her calling to me. I have come over all Goddess-y and pagan; and I love it!

The Goddess is my current spiritual crush. She happily invaded the writing of my second book, The High Heeled Guide to Spiritual Living, and I am starting to see why. She is coming back because we as a society need her. The feminine elements in our society are confused, mixed up and skewed. Her influence has been latent, but if my intuition is correct she is gearing up to be blatant. We need the Goddess energy in all of us to return and rectify the balance that a thousand years of a misinterpreted God energy has caused.

In the days before televisions and radio and even before books, the Pagan people worshipped deities. They adored the Gods for their masculine power, and the Goddesses for the feminine powers. But somewhere along the line, we forgot the value and the power that is essential to being a Woman. We all started to see only one God. He was a single old bachelor dude in the sky and he lorded it over the lot of us. His lady must have dumped or divorced him, because her name is never mentioned…

Somewhere along the path of human existence we got it all wrong, kids. We denied the girly parts of ourselves, we said that the females’ nature was weak and inferior and so when women tried to prove we were equal we all hankered after being more like men. It worked for a while. The girls wore suits and guys stayed home and played mum. But none of this was what we really needed. There was never any need to play dress up, and if we had respected our deep inner selves, then maybe the phrase “battle of the sexes” would never have been coined. In this mix up women have however shown that we are equal, that goes without saying. But we forgot to realize that we always were, even before we donned the jeans and become the boss. The world knows we are equal, now it’s time to get female!

We have all gotten lost in interpretation, but I feel a gorgeous Goddess-like energy getting under my skin, she is telling me that we should embrace and rediscover natural female power. And men should most certainly not be ashamed to have a bit of girl about them either, for it will empower them too, just as male energy has empowered us girls over the past century and helped us step out of the archaic and sexist doldrums. We all have a little something to offer each other, I’ll show a fella how to cry if he shows me how to get a thicker skin and somewhere along the line, with a lot of give and take and being very true to ourselves, it will all be gravy.

In my world of Woo I believe we are all part of a spiritual genderless whole, our bodies push us one way or another, but so many of us have tried to be like the lads, we have succeeded, but now the world is imbalanced. We need to bring back the harmonious, peace making energy of the ladies! We need to worship the heck out of it, and let it breathe, see where it goes when it’s not constrained by corsets, dogmatic rules or fear of itself! I believe the Goddess is overseeing and that if we get it right this time then “Girl Power” will take on a whole new meaning.

I believe that the Goddess of the 21st century is reinventing femininity and her energy is pretty irresistible! Her energies, are ushering up a whole new world. A world where male and female are equal but different where Women in power are still essentially women, wielding their compassionate strength with the same respect as the man’s business like dominance. In my spiritual belief we are all equal. Not because girls can bench press akin to an average guy. But because without each other, we would be lost. It’s high time we saw the difference, saw the similarity and loved each other irrespective.

The Goddess is my girl crush. She is shaking things up and moving them on- way past stereotyped gender roles and into new territory. A territory of blissful mutual respect, peace and love. This is my World of Woo and I hope to see you there!

Growing up around a pagan Father, goddess paraphernalia and artistic images of the female anatomy surrounded me. Whilst my Mum’s side of things was less graphic, they too were all for Womanpower! Not an easy ...

My sisters are my everything. Without them I can’t walk. They’re my water. They’re my air. They’re my religion and they’re my soul mates. What we have is almost too much for a lot of people.