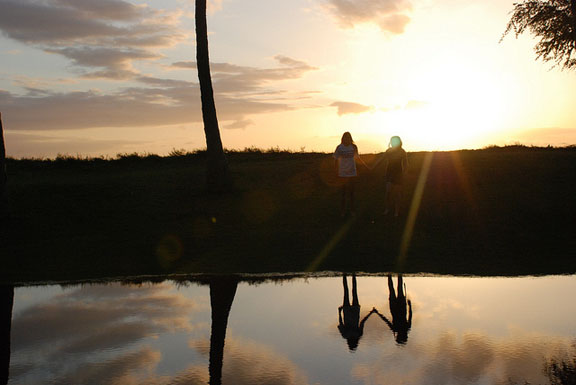 Why is it our best friends can see exactly whom we need to dump, what we need to learn, where we need to improve, why we need to move on and exactly how we need to do it — while we remain blind to their insights, deaf to their usually spot-on advice and downright annoyed when they share their opinions, even if said advice is given with a sincere mix of love and concern?

In turn we sport crystal vision when it comes to their affairs. How many times do we think to ourselves, “Why is she being such an idiot and beating her head against a brick wall again? When is she going to stop [insert any of the following: screwing her boss / drinking too much / messing around with that drunken loser who treats her like shit / procrastinating on that novel / retching up her lunch / blowing her life’s savings on shopping therapy instead of investing in the real thing]? Doesn’t that hurt?”

We all do it, because it’s terribly easy to assess the shortcomings of another’s situation and shout out a clear-cut solution to remedy it, and fast. It’s also equally as difficult to discern how to properly slog through the muck of our own messy challenges.

Simpler said than done, but fact is, we need to be our own best friends. Think of the years of wasted time, effort, bad credit and emotion we’d save if we simply agreed to remove ourselves from our own garbled equations and coolly review them as a close ally — or even a stranger, would do.

My friends watched me self-destruct more than once in my teens and twenties. I was fully aware that I was working out my demons, but my acknowledgment of such didn’t make it any less wearisome/concerning/exasperating for my closest compatriots, who were forced through proximity to experience all the crap right along with me. Because they listened time and again to my whining heartbreak over yet another dude who’d used and abused me, even as they bit their tongues. They saw firsthand how I’d basically begged these men to behave badly by my playing up my insecurities and low self-esteem, and playing down all that made me attractive in the first place. They endured wine-loaded pity parties, depressed musings on my all-but-certain future as a single cat lady and even ear-bleeding oral recitations (ooh, I’m cringing now) of wincingly bad poetry.

Finally, when I was stuck in a dead-end copywriting job that was crushing my soul AND the guy whom I imagined might save me from myself abruptly ended things — otherwise known as a break-up that leads to a breakdown — something surprising happened. Instead of collapsing into a naked puddle on the shower floor (okay, I did do that, but only for a minute), I pulled myself up and actually had a breakthrough. It was as if my very best friend, a voice that sounded exactly like my own but instead rang silently throughout my head, began speaking to me.

The voice said: “Are you really going to let some man take everything important from you? What is it that makes YOU happy? What are you so afraid of?”

Huh, I thought. This message wasn’t so very different from what my pals had been saying to me for years. But it was as if I was hearing it for the very first time. What would make ME happy? What was I so afraid of?

I was trapped in unfulfilling jobs and relationships because I was too scared to fully develop into the person I knew I needed to become. I was stuck in every way possible. And in the process I attracted other stagnant people and opportunities. It was a vicious circle. I had to break out, break through.

“I want to move to New York,” I told my friends a few days later, believing I was dropping some amazing revelation, one they’d never heard before. “I want to work in magazines and magazine are in New York. I’m 26. What am I waiting for?”

A few yawned. One even said, “You know, Lauren, if you’re not careful you’re going to develop a reputation for talking and never doing.”

Okay, I had waxed on about moving to New York before, maybe countless times. But, still: ouch. It was exactly the kick in the pants I needed, the kind only a true friend can deliver, perfectly timed. I packed my things and two weeks later drove a U-Haul 2,000 miles into Manhattan. As I crossed the George Washington Bridge, the tall buildings congregating before me like a welcoming committee, I realized the mere two grand burning a hole in my wallet was all that stood between me and dire poverty. I had no job lined up, no apartment in place, few contacts, and no security in sight.

And you know what? I couldn’t wipe the shit-eating grin off my face.

Looking back, it makes total sense that everything would fall into place. Because instead of trying to fit my decidedly square peg into a round hole — the wrong town, the wrong jobs, the wrong men, the wrong me — all I needed to do was acknowledge my utter squareness and seek the same. Within days of arriving in New York I had a place to live, within weeks a job on a national magazine and eight months later, after moving to Manhattan believing I’d never meet a decent guy again, I by chance crossed paths with my future husband. He was invited to a small party on the third floor of a building in Greenwich Village; my friends and I were attending a private affair on the second. Somehow, he wound up among my group of revelers…

And I was ready to finally meet him. Because I was happy. And because I’d listened to that voice, the still, small voice within me, the same one that echoed what my closest friends had advised me to do for years: Go out and be all you can be. Stop asking others to give you joy. Be your own best friend — listen to her, why don’t you? Do what she wants to do!