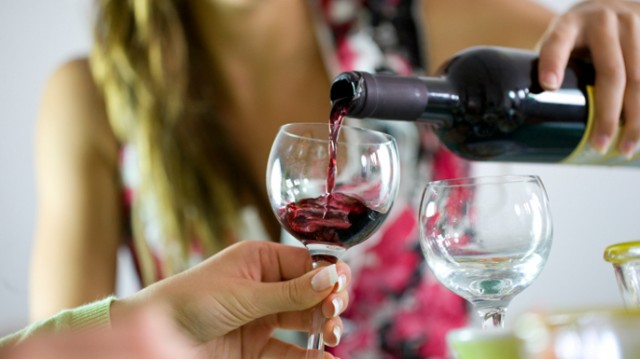 Alcohol and Pregnancy: It’s Your Choice

30-year-old Jennifer was pregnant with her second child when she stopped by her neighborhood liquor store to stock up on wine for a birthday party she was throwing her husband. The clerk, she remembers, looked at her with raised eyebrows, and then refused to make the sale. “I told him the wine wasn’t for me personally, but that it was none of his business besides,” says Jennifer. “He still said he needed to call his manager. He was visibly disgusted.”

Throughout the second and third trimesters of both pregnancies, Jennifer did, in fact, enjoy what she calls a ceremonial half glass of Pinot Grigio every Friday. “It was just something to look forward to, and sometimes I didn’t even finish it,” she says, adding that her doctor had given her the okay. But she pretty quickly learned not to drink in public. “I knew people were out there judging—or, worse, feeling compelled to actually say something,” she says. “The next table over would be whispering and not bothering to hide it. A waiter once refused to even show me the wine list. I just felt like I had a big target on my face.”

Until the early 1970s, moderate drinking while pregnant was both common and, for the most part, unquestioned. Many share stories of how their own mothers drank or smoked throughout their pregnancies, a cultural standard revisited in television shows like Mad Men, in which a very pregnant Betty Draper is seen smoking in the maternity ward. In 1973, however, a University of Washington study identified a group of physical and mental birth defects caused by drinking alcohol, together now known as Fetal Alcohol Syndrome, or FAS.

Though studies showing that FAS was a very rare outcome of largely severe alcoholism emerged as early as 1980— with numbers never rising over 1 case in 1000— FAS as a notion was transformative. According to a 1999 report published in the journal Alcohol and Alcoholism, FAS was key in turning excessive drinking from a moral (and largely private, family) concern to a viable public health matter, and by the 1990s was widely associated with child neglect and abuse, poverty, rising crime, and mental illness. In 1990, Wyoming became the first state to charge a drunk pregnant woman with felony child abuse.

The U.S. Surgeon General’s official position since 1981 has been for pregnant women to abstain from drinking completely, and alcohol consumption among mothers-to-be declined throughout the ‘80s and into much of the 1990s. But now those numbers are changing, and women like Jennifer are becoming ever more common. Recent Centers for Disease Control findings show that non-binge drinking— that “every now and then” glass of wine or two— among pregnant women has been increasing steadily since 2002. According to the CDC, the highest increase of women who drink while pregnant has been among college-educated women between 35 and 44.

In part, this is because studies keep coming out showing, in some form or another, that drinking while pregnant is safe. Like one published in June in the International Journal of Obstetrics and Gynecology reporting that consuming up to nine drinks in one week, and even as many as five in one sitting, did not have any significant negative cognitive effect on kids five years later. This study followed an earlier one published in the International Journal of Epidemiology that stated not only could pregnant women safely drink a glass of wine or two per week, but that their children would actually perform better three years after birth than those of women who chose not to drink at all. And in Europe, of course, where the perception, at least, is that pregnant women regularly drink and smoke—though, in fact, the official position on drinking in France is abstinence throughout pregnancy—birth defect rates are lower than those in the U.S.

So if science is telling us that drinking while pregnant is okay, why do we continue to judge the woman with the outstretched belly sipping from a glass of Merlot? Turns out, it’s not only right wing Republicans questioning a woman’s control over her own body, is it? Drinking during pregnancy is just one example. In fact, modern mothering is chock full of judgments, starting with how we conceive to how we act and what we eat while pregnant, and continuing after that, including how we choose to give birth and whether or not we decide to breastfeed.

This summer, New York City mayor Michael Bloomberg banned free baby formula in city hospitals in order to encourage new moms to breastfeed (after much uproar, he modified the decision to make formula available, but still harder to get). On the flip side, who can forget the uproar over the Time magazine cover featuring the breastfeeding mom who, so many declared, had “gone too far”? Moms, it seems, have a hard time winning.

Which is why despite the studies that seem to indicate low levels of drinking during pregnancy is perfectly fine— as are moderate amounts of caffeine and even raw fish— as a whole we continue to judge women who opt to have that occasional glass of wine— or coffee or sushi. We’re so fully entrenched in the age of over parenting—having opinions, and voicing them, about how other people raise their kids that, it seems, we can’t help but start in before the baby is actually born. And as the only ones who can carry a child, women bear the brunt of this judgment. We say we’re in support of a woman’s right to make choices, but are we?

This is not a call to drink while pregnant, or to be careless in any way. We know much more now than our own mothers did, and that’s an advantage. But years of experience studying gender and working with families have shown me, time and again, that mothers get a bad rap. This can create needless fear, anxiety, and self-doubt. Perhaps it’s time to rethink the tendency to assign blame, constantly monitor, and voice our every opinion about the choices other mothers make. After all, isn’t the prospect of having a baby daunting enough?

Feminism is an idea and the whole point of ideas is that you spread them, and share them as much as possible. An idea is only as good and powerful and useful as the amount of people’s heads that it’s in.