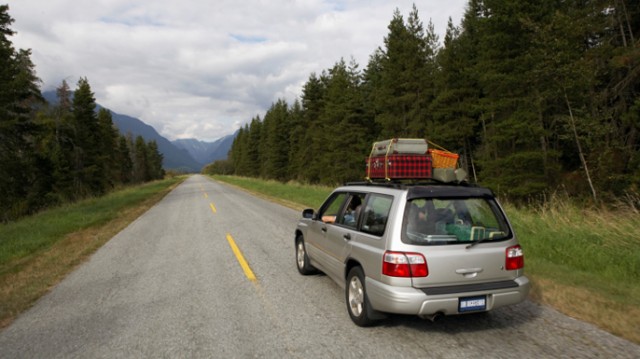 Do We Have to Buy an SUV?

“Are you going to be a cheap Indian man about this?” This is a common phrase at home, referring to my reluctance to spending over a hundred dollars on anything. I’ll do research for years, to the point that the product I covet has been upgraded or discontinued, forcing me to research all over again. But, I don’t have the option to procrastinate and cheap out on buying a vehicle that fits my family. Between my wife, Laura, our baby, Ruby, and our Malteses, Brando and Audrey, we can’t all comfortably travel in either of the vehicles in The Desai Fleet. Our ‘97 Subaru Impreza, which looks like it’s been garaged in a quarry, is about as comfortable as a junkyard couch on four disembodied heads. The back seat of our ‘08 Mini Cooper S has less cubic space than a seat at the Arclight Cinema. It’s not indecision preventing the purchase of a roomy ride; it’s denial. We can function as is, but we regularly make the 400-mile trek to see my mom, outside Sacramento. If we consider having a second kid, we’ll need room for two car seats. This is a spatial inevitability…we might have to buy an SUV.

The main crux of my dilemma is reconciling my disdain for monstrous, four-wheeled blocks of metal and entitlement with my 22-year-old, self-righteous self, living on a free mattress on the floor, buying my clothes at thrift stores, borrowing toasters from girlfriends, and not gassing up until I can hear the car choking on fumes. Full disclosure, I used to lambast one of my best friends, Debbie (founder of Belly Sock), about her SUV, vowing to never buy a gas-guzzling vehicle to fill the coffers of energy companies. Who really needs a car that big? Doesn’t it have a high center of gravity with a propensity to roll over? I don’t want to buy anything that screams, “I have kid, but I’m still a player.” With limited funds, space, and a refusal to go big, we’re looking at the crossover class of SUV. Although, when my family lived in NY in the ‘80s, we had a righteous Buick wagon with wood paneling, so we put wagons on the list. Boom. Plus, Laura grew up with Subarus, so they’re in the running. My little brother, the U.S. Attorney, argues that a wagon is an SUV, but I contend that a wagon is not as high off the ground and that the type of person who drives a wagon doesn’t feel the need to be ABOVE everyone else. If we get a wagon we can avoid being one of those people, no matter what my brothers says. (No offense to SUV drivers.)

Over Thanksgiving weekend in Sacramento, Grandma watches Ruby so we can knock out multiple vehicles in a test-drive bonanza. We experience the Subaru Forester, which needs more horizontal space; Subaru Outback (three test drives), a luxury car on the inside with a non-pretentious, utilitarian exterior; Mazda CX-5, lacks the power to merge on a SoCal highway; Laura hates the Toyota RAV-4; and the Honda CR-V looks slick, but gutless.

We buy a 2013 Subaru Outback V4, Limited in Satin Pearl because it feels like home, and it’s loaded with AWD, heated seats, satellite radio, Bluetooth, and a huge trunk. Our sales guy in Shingle Springs is an ex-Hollywood session drummer who relocated to the country to raise his kids out of the insanity. With the year we’ve had (dad passing away suddenly and a new baby), we lack the vigor to haggle, so we use the pre-negotiated Costco price and finance it at 0.9% with no money down. This is when the fairly mundane process of buying a car and the surrealism of life collide via fate. The finance manager treats us with an odd familiarity. “Are you the Desais, as in Dr. Desai?” “The urologist or allergist?” “Come with me.” He recounts how his GP thought he had bladder cancer and how my dad, the urologist, made him quit smoking and said it was e-coli and that he did not in fact have cancer. My mom also notices the photo in his office and says, “Oh, I recognize your son. He’s my patient.” The kid doesn’t struggle with allergies any more. He wonders why my dad isn’t with us. When he finds out that my father passed, he hooks us up with an extended warranty, while fighting back tears and reminding us of what a hard ass, straight talking, son-of-a-gun my dad was. Upon returning home, my family and friends love to refer to my wagon as an SUV. “Your SUV is really nice.” “It’s not an SUV, it’s a WAGON!” “I really like your new SUV.” “It’s a freaking wagon! See, low center of gravity?” “Cool, SUV, Aadip.” “Grrrrr!!!” If you’re driving a small car and I’m blocking your view, it’s not that I think I’m above you, it’s that the baby needs sleep, we’re late for the preschool consultant, my dogs need grooming, and my wife needs tofu. Just zip around me in your sexymobile and go see a movie. Better yet, drive to the airport and get on a plane to somewhere exotic, for me.