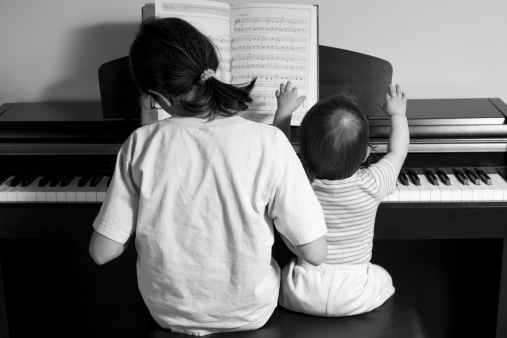 GIVE LIFE BACK TO MUSIC: THE SOUNDTRACK OF PARENTING

I’ve put Ruby, my 11-month-old daughter, down for the night after crooning a tender rendition of her favorite lullaby, “Redemption Song.” I’ve migrated to our postage stamp-sized balcony to escape, taking in the summer swelter of Los Angeles while Daft Punk’s “Give Life Back To Music” plays. The refrain inspires a sense of nostalgia for what music has given me: a life, a career, solace, travel opportunities, friends and an easy icebreaker when it came to girls. You don’t have to be a dashing raconteur if you can hit drums pretty hard, put air through a horn or sing a potential inamorata’s favorite jam.

Most importantly, playing and listening to music saved my life, rescuing me from crippling shyness, loneliness, bullies and self-doubt. Even now, music’s rejuvenating power is a crucial centering mechanism in my new phase of life as a dad and writer. Since the age of six I’ve played a variety of instruments, but settled on trumpet, drums and guitar in my teens. Music became my identity.

Recently, there’s been some chatter among the type-A, results-oriented, helicopter parents who think yoga is a competition sport, about their youngsters’ aptitude in and exposure to music. I’d be lying if I said I wasn’t feeling some of the peer pressure to join their subculture of music classes for kids, including: Kindermusik, drum circles, Suzuki for infants, rock and roll school for babies, Baby Einstein and private music lessons. I try not to judge, because why disparage any encouragement during a climate of disturbing marginalizing of arts education?

A few studies, marketing and a parental rumor mill fuel the assertion that early exposure to music (usually referencing Beethoven and Mozart), stimulates right brain/left brain activity, utilizes visual, auditory and kinesthetic learning, develops gross motor skills, improves coordination, develops self-confidence, encourages creativity, increases memory, builds discipline and fosters socialization. I can’t say for certain if any of this is true, but in a world of ubiquitous external stimuli, I’m making the case that music should not be relegated to another means to an intellectual end, but something to be cherished as a source of creativity, relaxation, emotional connection and pure joy.

In contrast to these programs, we’d prefer our child pursue avocations which she is passionate about, not just because we say so. Our approach is, “Hey, you seem to like when Billy Joel sings along with his piano, so here’s some Nat King Cole, Stevie Wonder and Elton John.” Her own affinity for music has been evident from the beginning, a result of nature and nurture. Maybe it’s no coincidence that her name is featured in a few iconic and rather saucy songs (“Ruby” by Ray Charles, “Ruby Baby,” “Ruby My Dear,” “Ruby Tuesday,” “Ruby Soho,” “Ruby, Don’t Take Your Love To Town,” and “Ruby” by the Kaiser Chiefs). We can also trace musical ability back to her maternal great, great grandfather and her paternal grandfather. My wife was a talented flautist, played piano, and picked up the Stratocaster a year before she got pregnant.

While in utero, Ruby was involved in all of our musical activities, like my paradiddle practice on her mom’s belly, the Tenacious D music video we were in and the Primus/Fishbone concert where an ex-con put out his cigarette in deference to this future ROCKRGRL. Most telling, she was born to Rancid’s “11th Hour,” which was a call-to-arms for the cooler members of the Cedars-Sinai medical staff. Her toothy grin broadens as Toots and The Maytals’ version of “Take Me Home, Country Roads” plays or when Sonny Rollins’ “I’m An Old Cowhand” fills her nursery. She goes absolutely bananas when she gets to strum the guitar while I play the chords in my left hand and she bangs on her high chair tray trying to match whatever rhythm I’m tapping on my legs or the table.

It actually blows my mind to see her so connected to music so young, without a structured, goal-oriented approach. Music gives you what you put in, and it can be a lot, a little, or everything in between. My only hope is that Ruby’s passion and enthusiasm for music continues to enrich her life as much as it has mine, and I would love to see other kids experience the same.

Oh, she just woke up. I better change the track to “Get Lucky” before there’s hell to pay.