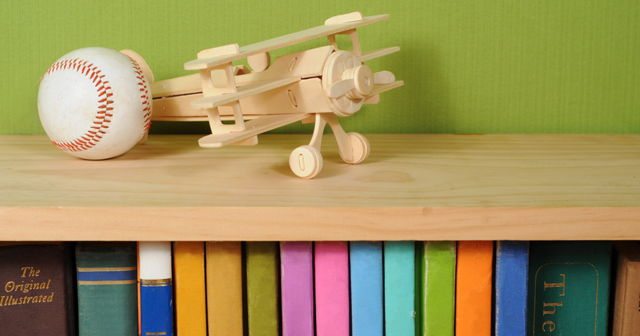 More than just about anything, Fiona’s boys hated having their nails trimmed. They were rough-and-tumble types, with a penchant for superheroes and playing with sticks. So Fiona came up with a diversionary tactic: nail polish. “At one point, both boys had toenails in every color I own—purple, gold, fire engine red, green,” she recalls. “It started out as a bribe, but it turned into a big treat… our little in-joke.”

A few years later, when the older boy, TJ, started kindergarten, he came home and told Fiona that the other boys in his class thought his painted fingernails were “weird.” Fiona told TJ that he could do whatever he liked, but that painting his nails was his own choice. Though TJ’s interests varied widely, he was never a boy people would describe as “feminine.” He was a kid who wanted to tape sharpened sticks to his fingers so he’d have claws like the X-Men’s Wolverine. He was also a kid who wanted his nails painted green and purple from time to time.

Most days, TJ decided to limit the painting to his toenails only. That way, he told his mom, he could still enjoy the ritual but “the other boys won’t know.” One day, though, TJ came home and asked Fiona to paint his fingernails blue. He took some teasing for it at school, but this time around, he didn’t care. Later that week, Fiona and TJ were shopping at the local market when the checkout guy remarked, “nice nails.” The guy had a black leather jacket, black nail polish and, recalls Fiona, “oozed cool.” TJ was visibly proud of himself for being so hip. “It really made his day,” she says. “He walked taller, spoke in a deeper voice, and acted cool for the rest of the afternoon.” All on his own, TJ had figured out something about identity, belonging, and what it means to be interesting— and it had nothing to do with conforming on the playground.

For years, psychologists hypothesized that raising strong, confident boys had more to do with nurture than with nature, and that it was essential for parents—fathers, mainly—to instill in their boys a masculinity and sense of self. But most scientists now believe that boys are hardwired from birth to be boys—and that boyishness can show up in a variety of ways. As mothers of young sons, my friends and I often worried about the influence of just about everything they encountered, from violent movies and video games to divorce, gangs, drugs, and alcohol. We wondered: What kind of men do we want our boys to grow into? How could our boys learn to be masculine without being destructive? How could they learn to be caring without being faint of heart?

Through years studying children and adolescents and their families, I’ve observed that the mothers who are the most successful at tapping into their sons’ boy power are those who realize that boyishness can, and should, show up in many different ways, from messing around in the mud to running home to help fix dinner to expressing themselves creatively. To help your son harness his “boy power” and grow into a strong, independent man:

1. Realize boys will, yes, be boys. Value your son’s manliness while encouraging growth, independence, and a sense of adventure. Though Mac’s mother, Susan, tried to shield him from aggression by keeping him away from TV until age 2, Mac liked using sticks to poke things from the time he could walk. By age 7, despite Susan’s ban on toy guns, Mac and his brother would regularly chew their morning toast into the shape of pistols and pretend to shoot one another. The lesson: Boys will create what they need to express themselves. If they want gun-shaped toast on the menu, they’ll put it on the menu.

2. Respect his individuality. “Boy” has no one definition. There’s a wide range of styles of being a boy. By not insisting that your son acquiesce to standard gender roles or play with “gender-correct” toys, you will help him develop into a more independent, open-minded, and sensitive person. When 12-year-old Ethan had to select 7th grade electives, he chose cooking and sewing. “I’m sure in some circles that wouldn’t be a very popular choice for seventh grader to make,” says his mom, Ursula. “But I didn’t say ‘You’re what?’ I said, ‘That sounds great. What are you learning to cook?’”

Realize that being masculine doesn’t exclude boys’ interest in female activities. The boys I’ve met through my research cook, clean, garden, and primp, all in their own ways and with their own goals in mind. “Nobody’s gotta tell me I’m a boy,” says 7-year-old Sean, a boy with a well-developed affinity for both judo and baking cookies. “I know it inside. Always did, ever since I was little.”

3. Refuse to fall prey to gender-based expectations. We as a society persist with the notion that the male and female genders have different and distinct traits. This is not true. This sort of gender typing is, in fact, thought to impede emotional development and account for violent behavior. Children who are not bound by gender conformity seem to be better adjusted. In my work, I observed that boys who are not trapped in gender roles were more independent, more open minded, and more sexually tolerant than their peers. These boys also more easily related to females with respect and openness.

4. Help him deal constructively with criticism and prejudice. Teach your son how to be assertive and stand up for himself without being overly aggressive. Ten-year-old Caleb was struggling with being small for his age, and his classmates were starting to tease him about it. His mom talked with him about “all the great things about being small—like when playing hide and seek, you can find a really good place to hide,” she recalls. Later, Caleb was heard playing with his younger cousin. The young girl said, “Caleb, you’re really small for your age, aren’t you?” Caleb replied, “Yes, I am,” and proceeded to proudly enumerate all the good things about being small.

5. Foster diverse interests. Many parents want their kids to be just like them: If they like piano, they want their kids to be pianists, only better—and the same with sports, choice of career, and lifestyle. But encouraging your son to participate in a wide variety of activities will enlarge his scope of interests, enrich his life, and help him appreciate freedom of choice for himself and in others.

Maria enrolled her son, Zane, in ballet when he was four, wanting to expose him to a range of cultural experiences. Though he loved dancing, as he grew older, teasing ensued. Finally, at age eight, Zane quit, only to find that he missed ballet. “You can handle this teasing thing,” Maria told him. “Tell your friends to shut up and get over it.” Deciding that he wasn’t going to let his friends influence his decisions, Zane made his friends apologize. Then he returned to ballet class.

We all have the capacity to hear. And when we start to pray and meditate we start to get our lives together. We start to practice forgiveness and we start to really make those shifts. We clear that channel and that’s when we can begin to receive.