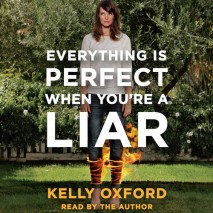 Everything Is Perfect When You’re a Liar

A wunderkind producer of pirated stage productions for six-year-olds
Not the queen of the world
An underage schnitzel-house dishwasher
The kid who stood up to a bully and almost passed out from the resulting adrenaline rush
A born salesman
Capable of willing her eyesight to be 20/20
That girl who peed her pants in the gas station that one time
Totally an expert on strep throat
Incapable of making Leonardo DiCaprio her boyfriend
A writer
A certified therapy assistant who heals with Metallica mixtapes
“Not fat enough to be super snuggly.” —Bea, age four
Not above using raspberry-studded sh*t to get out of a speeding ticket
“Bitingly funny. But everybody knows that.” —Roger Ebert
Sad that David Copperfield doesn’t own a falcon
A terrible liar

My whole life isn’t one giant press junket. I don’t have to be smiling all the time and always
have the perfect answer.