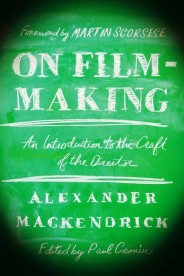 On Film-making: An Introduction to the Craft of the Director

After more than twenty years in the film industry as a screenwriter, storyboard editor, and director of memorable films such as The Ladykillers, Alexander Mackendrick turned his back on Hollywood and began a new career as the Dean of one of the country’s most demanding and influential film schools. His absolute devotion to the craft of filmmaking served as a powerful impetus to students at the California Institute for the Arts for almost twenty five years, with a teaching style that included prodigious notes, neatly crafted storyboards, and handouts containing excerpts of works by Kierkegaard, Aristotle, and others. At the core of Mackendrick’s lessons lay a deceptively simple goal: to teach aspiring filmmakers how to structure and write the stories they want to tell, while using the devices particular to the medium of film to tell their stories effectively.