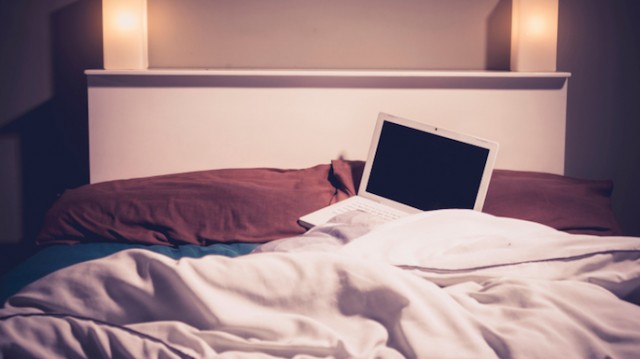 Because of my firmly-rooted spiritual beliefs (I am a Christian), my obvious answer to this question is no, in my opinion, it cannot. But allow me to expound upon that a little. As I wrote in a recent blog post “I Love Jesus, and I love Scandal” (as in, the TV show):

“I am an avid, lifelong film and TV and theater geek who has a deep passion for the arts and I recognize that art isn’t always G-rated. Some of the best art is dirty and gritty and messy…and I am able to separate art from life and not allow viewing something on the big screen or attending a concert or admiring a painting to cause me to sacrifice my morality.”

So does being a Christian mean I’m a prude who views anything remotely sensual or sexy as “off-limits”? No. Not at all. I’m a supporter of healthy sexual expression between a woman and a man. It just so happens that I am planning to save that healthy sexual expression for the bounds of marriage (but it’s not my place to judge you if that’s not your stance). And healthy sexual expression just doesn’t leave room for inviting anyone else into my bed with my husband and I, which I believe is essentially what pornography does. It seems to denote a lack of satisfaction with your partner, as though what they have to offer doesn’t quite measure up (pun not intended). Beyond that, I believe pornography is just simply damaging to the mind, body, and soul. A study by NPR found that frequent exposure to porn leads to an increase in sex addiction, extramarital affairs (Internet users who had had an extramarital affair were 3.18 times more likely to have used online porn than Internet users who had not had an affair), and ultimately, divorce. I think any time you open up the door of your marriage to a third party, even if it is a seemingly “harmless,” one-dimensional “fantasy” on the TV screen, you risk losing yourself and/or your partner in the process (along with little pieces of your soul).

I also believe pornography cheapens the beauty and sanctity of lovemaking, like trying to substitute a cubic zirconia for the Hope diamond. The most intimate sexual acts are carried out in robotic, meaningless, lewd ways by the body with the heart unattached to the act all together. It is my hope that when I do someday make love to my husband, it will be led by the heart and will involve every part of me. It won’t be merely a means to an end…but the symbolic expression of my love, passion, and desire for him. (And I can’t wait for that day, by the way. So why would I ever let some pornographic film with a terrible plotline and even worse acting steal my thunder?)

You hear from a lot of moms and new moms ‘Oh, I’ll pick it back up when I’m older or when my
kids are in school,’ but for me each assignment is unique. You can’t just say I’ll do this later.