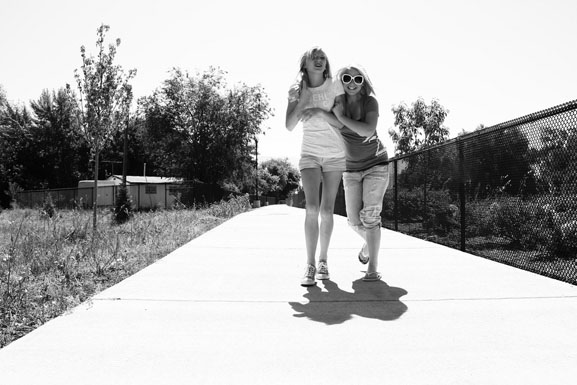 Do We Value Our Own Pleasure Enough to Support It in Our Daughters?

“The day I received my period, my mother gave me a pad and told me never to let boys play with me ‘down there’.”*

Even though we only want the best for our daughters, we tend to have a blind spot when it comes to seeing sexual desire and pleasure as important components of their lifelong happiness and well being. When we leave sexuality’s vibrancy out of our dialogue with them, we not only undermine their ability to feel deserving of its richness throughout the life cycle, we also disregard its meaning in our own lives.

But in an effort to meet the unrealistic cultural standards imposed on us– to be virginal or sexy or beautiful or curvy or skinny in the eyes of someone else– we often buckle under that pressure and develop negative patterns of self-scrutiny. For many mothers, our own habits of scrutinizing then lead us to spend vast amounts of energy directly and indirectly teaching our girls to focus on weight, dieting, physical imperfection and the dangers associated with sex. Conversely, we spend little energy helping our girls grow into women who feel comfortable with their bodies and sexuality. We give them far too much of what they don’t need and not nearly enough of what they do, setting our daughters up to move through their lives in an unhealthy haze that undermines their confidence, colors how they see themselves in every aspect of their lives, and can lead to depression, anxiety, eating disorders, substance abuse, self-mutilation and either unhealthy or unhappy sexual relationships.

I think we forget how overwhelming it can be for a girl to go from living in a carefree pre-adolescent body to finding herself in a new, more mature one that demands her attention in ways that are totally foreign to her—physically, socially and sexually. Shocking as it may seem, many women in my research reported not having been taught anything about sexuality by their mothers—even women in their early twenties, such as the one quoted at the beginning of this piece. And of the women whose mothers did “talk” to them about it, most reported a one-time conversation that ran something along the lines of: “Don’t have sex. Don’t get pregnant.”

What does this say about the extent to which we allow ourselves to celebrate our own sexual passion? In an effort to keep our daughters safe, are we adding to the illusion mothers are asexual, and are we selling that to our daughters as the future they have to look forward to? When we consider our daughters’ sexuality, of course we want them to be aware of the dangers so they can stay out of harm’s way. But do we ever consider the disservice we do them, as well as ourselves, by leaving arousal and pleasure completely out of the picture? As adult women we highly value arousal and release, but dare not speak of it to our girls. If we ourselves appreciate pleasure but withhold support of our daughters having it in their own lives, can we be comfortable with that double standard?

Making sure they know we can honestly discuss sexual information as well as matters of the heart together will help our daughters develop the self knowledge and confidence necessary to listen to their own bodies, hearts and minds. It will also enable us to bond and know we can confide in each other throughout our lives. We need to remember that we ourselves long for those erotic moments in which we feel totally alive and immersed in intimate human connection. It’s why we want to fall in love; it’s why a lover’s touch makes our eyes involuntarily close; it’s why we can’t wait for Mr. Rochester to sweep Jane Eyre into his arms and kiss her already; and it’s why Fifty Shades of Grey has sold a bazillion copies.

Sometimes the unhealthy messages we absorb and pass onto our girls encourages both mother and daughter to disavow ourselves of the bodies we’ll spend every single day of our lives in. Listen to the hardship women confess when their sexuality hasn’t been normalized and nurtured:

“I have been disconnected from my body and my sexuality for much of my life. The indoctrination I received [from my mother] set the tone for a sense of shame and guilt about it that lasted until much, much later in life.”

“I feel insignificant and unworthy of the love my boyfriend shows me. And I wish I could feel content in my own skin. Having a loving, supportive partner who thinks I’m perfect does not seem to make it easier, so I’m not sure what will.”

“When I’m with a guy I often shift to how is HE feeling, and therefore my orgasms during sex are few and afar between. Which is a shame. My orgasm is just as important as his, but since I have for so long had such difficulty having a guy get me there I just forgo it, accept that I won’t orgasm during sex, and just say I’ll do it for myself later…Why do I let myself, or the guy off the hook so easily when I don’t get off? I push my own needs to the side—consciously too—because like so many women I aim to please.”

And to help us disengage from our obsession over how we see ourselves, I want to give a representative example from the male perspective (although lesbians confided some of the same self consciousness). It depicts how we might actually be working against ourselves when we’re so preoccupied with our flaws that we don’t let our partners in:

“I love my wife’s breasts. They’re beautiful to me but she doesn’t like them. When she’s naked, she’s always covering them up, folding her arms in front of them, even though I constantly tell her they’re incredible. Her self-consciousness really gets to me. It makes her shy in bed. I love her, but you know what? I’m getting a little tired of it. She constantly dismisses me when I compliment her and I’m starting to wonder why I even bother to reassure her when she makes it so clear that it doesn’t matter to her what I say, or how I see her.”

Is our fear of our daughters becoming sexual so severe that we inadvertently inhibit their ability to let themselves love and be loved? Or to feel as sexually alive as men are allowed to feel?

So when we can’t summon the courage to talk to our daughters about the vibrancy of pleasure, it might help to ask ourselves: How can we wish something so meaningful for ourselves, and not wish it for them?