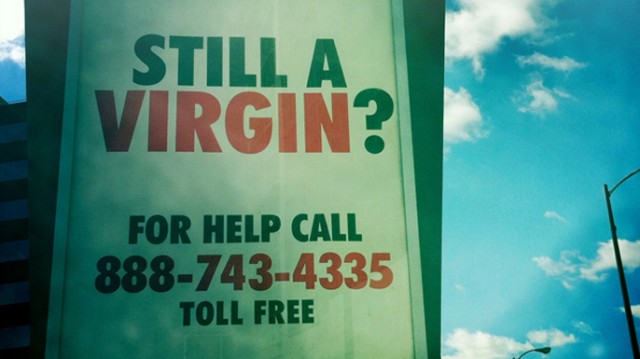 I don’t know if it’s the fact that it has become a public spectacle, if it’s my age or if it’s because people now view my virginity as an actual personality trait, but the ferocity and audacity with which people continue to discuss my virginity unfailingly impresses me.

During my brief tenure in Los Angeles last year, I made it a point to squeeze in a couple of JDates. (The guys on JDate in LA are a different, more attractive breed than those in Chicago and, shallow or not, I couldn’t pass up the experience.) One of the guys I decided to go out with was one who, under any other circumstances, would have been way out of my league. Meeting online, however, leveled the playing field a bit.

The night of our date, I got stuck at work (as a nanny) and we decided to just grab a drink when I finished. I jokingly warned him that because of the time, I would just go straight to the bar in my work clothes. Yoga pants and a Michigan T-shirt. Why I didn’t just cancel remains a mystery, but he said he didn’t care. And I believed him.

It was one of the smoothest transitions from online to in-person. Conversation was easy and we had similar senses of humor. We had bonded over Mardi Gras via JMail and continued to swap stories over drinks. At some definitive point in our conversation, he pronounced that I had missed out on quite a few quintessential New Orleans activities during my most recent visit. The one he found most appalling was my refusal to eat gumbo and I’m fairly certain that if he hadn’t just ordered a drink, he would have walked right out.

“Are you a virgin?” It was a shockingly sudden revelation; the answer to a riddle he had been trying to solve.

“Well, you don’t eat fish, you don’t do anything fun… I just assumed you don’t have sex either.”

I can only assume (hope) that in the alternative situation, he would not have been so quick to broach the topic. Why is it, then, that when the answer is even presumably virginity, it automatically becomes acceptable to pose the question? Why is it that the word “virginity” intrinsically removes any ownership I have over it? My number may be zero, but it’s still my number.

My virginity has become separate from me. Personified. What topic should be a personal conversation turns instead into a form of detached research. Friends frequently have lengthy conversations about my virginity, openly, with each other and in front of strangers – always without my permission. Most of the time even without my presence. (They often relay the conversation to me later.) The intimacy I lack in my sex life is the intimacy I lack in discussing my sex life.

A couple months ago, I went to a Jewish fundraising event. A friend and I scouted out the eligible Jewish boys while hitting the open bar, then quickly gave up and made our way over to the table. Vigorously shoving jellybeans down our throats, we waited for the rest of our group to settle into the disappointing idea that there were no eligible Jewish boys. The group slowly but surely joined us and I began talking to one of the girls I had met briefly earlier that night.

Suddenly, the new girl had a stroke of genius: she was going to set me up with a classmate of hers from graduate school. She narrated his dating resume and, as we hovered over her phone stalking him on Facebook, my friend (seated in between us) instinctively leaned over and whispered, “She’s a virgin.” Okay. Why is that something, namely the first thing, this stranger needs to know about me? Perhaps more importantly, why was it whispered like a secret, a secret I didn’t know or shouldn’t know was being shared? It was like a compulsion; she needed to warn the new girl before someone was unknowingly subjected to my virginity, to me.

I wish I could say this was an isolated incident, but I have lost count of how many times I have been introduced as “the virgin” or “the one I told you about…who’s a virgin”. Every time I go on a date, the first questions my friends ask are: “Did you tell him you’re a virgin? Does he know?” And they are shocked when my answer is consistently an emphatic “no”. I didn’t realize it was now proper to introduce yourself by name, age and number of sexual partners. I doubt that on a first date, any one of them would lead with how many guys they’ve slept with. Why should I?

Contrary to popular belief, my virginity is not my best quality.

It does, however, seem to be the one of most interest. I have a friend in Senegal (he is not alone in this, but he does do it from farthest away) who very rarely has the opportunity to call home. Our conversations are extremely brief and we barely have time to cover formalities. After health and homesickness, it’s time to sign off.

“Okay, bye. I love your face. Are you still a virgin?”

Laughter. And he’s gone. He even forced me to buy a calling card in the slight chance that if I lost my virginity while he was abroad (two years), I would be able to call him immediately.

I guess I should be flattered that people take such an interest in my sex life, my virginity, but I can’t help but wonder what in the world people will talk about after that fateful day when I do have sex. When there will be nothing to warn boys of but my multitude of neuroses, phobias and OCD manifestations. When, with the loss of my virginity, I lose my sparkling personality, my character, my identity.

Jamie Bliss is an ironically hyper-sexual, mysophobic Jew with 26 years of undiagnosed OCD.  People say she’s quirky, but she thinks that’s just because it’s a more socially acceptable synonym for crazy.  She has a zero tolerance policy for bad grammar.

All these things you believe are your deepest darkest secrets are going to be the things that
give you your greatest happiness, and you’re going to be fine. You’re fine just the way you are.