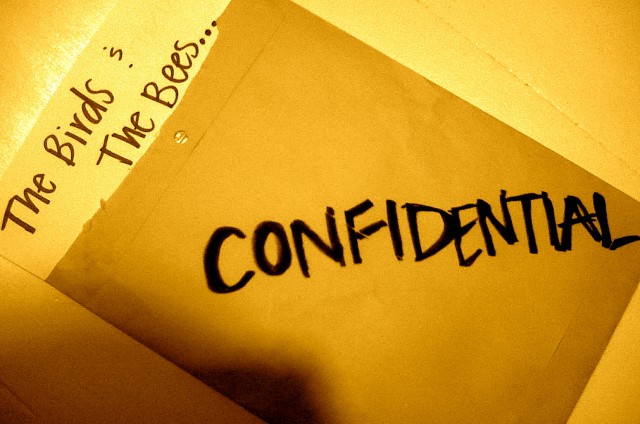 Sex Has To Be An Open Conversation

I was about 10 years old when my mom asked me if I knew what “oral sex” meant. I remember the moment clearly. I was riding in the backseat of our minivan. It was one of those rare times when it was just the two of us. I don’t know where my older brothers were, but I’m sure my mom had been waiting for a moment like this to ask me. It was around the time Bill Clinton’s scandal was picking up national attention. I’ve been a news junkie since I was a kid, so I’m guessing my mom figured I’d heard the term and probably wondered what it meant. I suspect her real fear was that I’d already asked my friends. It was probably a huge moment for her, for 4th grade me it was a blip on the radar. I know I sat quietly for a moment piecing together the meaning of those words that I already knew. I remembered the meaning of oral and I sort of knew what sex meant (okay, not at all). After a brief pause I proudly said “It means talking about sex” and that was the end of that. My mom didn’t bring it up again.

I got older and of course learned the definition of oral sex. I took the state required health classes and had occasional talks with my mom when I had questions. To her credit, she did the very best she could to keep me informed on the basics. She never shied away from answering questions, it’s just that I didn’t have a lot. As a teenager I got myself involved in church and it was relatively easy to avoid learning much about sex if I just promised to wait until I was married.

That was easy as a teenager, but eventually you become an adult. I learned that while I was focused on saving this big thing I knew very little about, my peers were actually learning what it was and how it felt. So I entered into young adulthood feeling very late to the party.

Again, I want to stress that my mom did a wonderful job of answering questions, but I’m not sure she initiated much talk about sex. Who can blame her? I doubt her mom had many conversations with her on the topic. I was raised in the South by parents who were also raised in the South (and so on, as far back as we can track). This is a region where talking about sex is simply taboo. I recently lived in Mississippi where parents are still fighting the good fight to keep sex ed out of schools completely. A state, mind you, that has the highest teen pregnancy rate in the country.

I’m going to talk to my kids about sex. I mean really talk to them. It’s going to be an ongoing conversation. I don’t have kids yet, but this is my vow. I will initiate conversations about sex. I will aim to be the first person to explain certain terms to them. I will never make them feel like their sexuality is a thing to cover up. I will empower them.

I have a great deal of respect for the tough decisions parents make. I understand that parenting is deeply personal. When it comes down to it, every person with a child is just muddling through without much instruction. That’s why I’m taking it upon myself to break a cycle. I’m going to change the way my kids learn about sex. I don’t want them to hear about blow jobs on the school bus before I explain oral sex to them. I don’t want my daughters to think Cosmo is the ultimate handbook for such things. I want them to be empowered. I want them to know that sex is an important part of their adult life, but there’s a time and place for it.

I want sex with my kids to be an open conversation from the moment they start to wonder.

Elizabeth Wren is a journalist in her mid-twenties living in the Carolinas. She writes a television newscast by day, blog posts by night and makes lists on any paper she can find 24/7. Elizabeth was a track and field athlete for more a decade, specializing in sprints and jumps. Now she runs for fun and still jumps over things when people aren’t looking. She hopes to be known as the kindest woman in the world, but it’s a constant challenge. You can follow her on Twitter @elizabethquote

More From Elizabeth Wren view all

One thing that kept me balanced was knowing what it’s like to have nothing and be struggling. That made me really cautious with my money when I started to receive it and understand it. I didn’t abuse it.