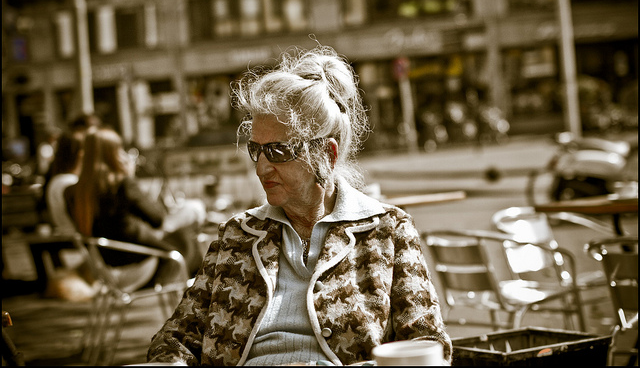 The other day my mother, 81, finally succumbed and went to the doctor to get some blood pressure pills; her first question was, “They’re not going to affect my libido, are they?”

Her lover is 20 years her junior – which is probably what keeps her young. Sexual energy is a powerful and bonding force and often at the core of an older woman/ younger man relationship. However, female sexuality has always been a contentious issue, especially in a world that has been dominated by men for millenia.

According to Dr Peter Hercules, “A widespread perception was created that women were incapable of experiencing significant sexual pleasure and that their only interest in having sex at all was to trap a man into commitment. If this were true, then why do men go to such lengths to control women’s sexual behavior? The reality, of course, is that this concept is simply a big lie. Women actually have a greater sexual capacity than men and men are threatened by this fact.”

In Victorian times, both doctors and the patients who sought medical help believed that strong sexual desire in a woman was a symptom of disease. Self-control and moderation were thought to be central to the health of both men and women, but women’s supposed milder sexual appetite meant that signs of excess signaled that she was dangerously close to the edge of sexual madness. Not surprisingly, physicians registered the greatest concern when the disease appeared in ‘refined and virtuous’ women.

Is it even possible nowadays for a woman to be respectable and sexual? Usually, the media slap some stereotypical – and sometimes pejorative – label on sexual women. For men, it has always been socially acceptable to be seen to have an active sex life, but not for women. We have to be discrete about it. Is that fair?

Even up until relatively recently, women who were tied into unhappy sexless marriages were unable to escape because of socio-economic reasons; a film like The Graduate from 1967 illustrates this situation, where having an affair (in this case, with a much younger man) was the only form of gratification they could hope for. However, over the past half century, women have steadily gained on – and are in some ways surpassing – men in education and employment. With this new-found financial independence, women are able to chose their mates based on different criteria from those of a generation ago.

We are now in the middle of a global tectonic change, where old structures are crumbling and new ones have to be constructed in order for us to adapt to different ways of living and thinking.

When I left university in the early ’80s and came back to the family home in London, my mother, after two marriages, was living with a man my age. Despite the disapproval of her contemporaries, which she wasn’t too bothered about, it was a very happy household full of laughter for several years. Her attitude was: “I’ve taken care of other people long enough, so I’m doing something for me.” My attitude was as long as she’s happy, I’m happy and we all got on well; he was like a brother to me. She was a great role model for me, and so it became nothing unusual for a woman to date a younger man.

So when I tried online dating in 2006 and found only not-very-attractive older men sending me messages, I thought I’d set up the kind of dating community that I would like which was when toyboywarehouse.com was born. It was then that I realized that almost all of my boyfriends had been younger, and that more than 60% of my female friends were dating or had married men that were younger than them. My friends are independent, dynamic women who certainly would certainly not identify with the stereotype ‘cougar’ much bandied about by the media. They’re not predatory, as the wild cat image implies, and not the ‘find-a-rich-husband-to-take-care-of-me-forever’ kind.

Despite all the progress women have made, there are still vestiges of prejudice that appear from time to time. Recently, when a female TV presenter, 32, started dating a 17-year-old boy band singer, I was asked to do several interviews, as so many people found this puzzling. It caused comment, outrage, indignation in the British press with a journalist calling the relationship “inappropriate or slightly creepy” and even “of using her rank for sexual gratification”. The matrons were incandescent, the old colonels were tut-tutting and the curtains were twitching all over middle England. What was different about this relationship as opposed to other older women/younger man relationships is that the woman is only 32.

Over the last few years, we’ve gradually got used to role models of women in their 40s to 50s dating and marrying younger men, but somehow, a woman in her early 30s who chose a man 15 years younger was unacceptable to a lot of people. My experience with toyboywarehouse.com, however is that age of women signing up to the site looking for a younger man is going down. When I launched the site 4 years ago, it was generally women 35 and up – and now it is women from 25. My aim was to free women from being stereotyped and give them the freedom to chose for themselves. I now hear from them what a difference it has made to their lives.

We’re still the only site in this niche, which doesn’t use stereotypes and isn’t trashy but aims to be intelligent and sexy and the same time. I long for the day, which may not be for another generation, when a woman of any age dating a younger man will be as normal as the other way round. I can only be grateful for the example my mother set for me and hope that at 81, I’ll be asking the doctor the same question.

Julia Macmillan is an artist and founder of www.toyboywarehouse.com. You can find her blog at Wags2Riches.
comments (0)