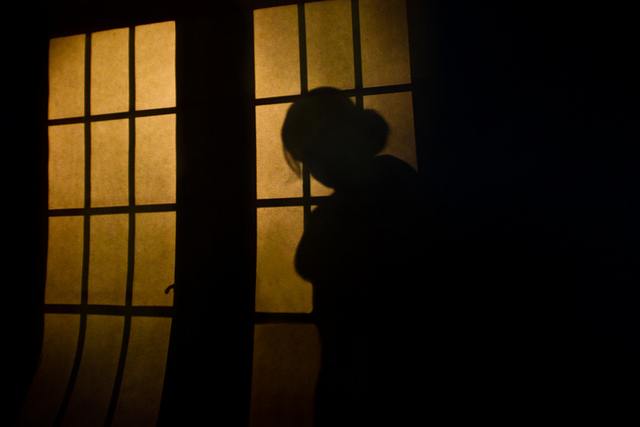 It’s been awhile since I’ve even been remotely attracted to a man, besides swooning crushes on unobtainable celebrities and rock stars. I look around this big city and all I see are guys with baggy pants exposing their underwear, with about $1000 worth of rope chain around their neck and a bus pass, uptight businessman in ill-fitting suits and comb-overs or sports freaks with a wardrobe filled with team jerseys and a diet that consists of hot dogs and beer.

It’s tough being a single woman pushing 50. My libido has been laying dormant for quite a while. I pretty much decided that there was no “type” out there for me. I would never find the “lid to my pot” and I’m fine with that. I am perfectly happy living my loner lifestyle as long as I get out once-in-awhile and spend time with friends. I’d rather be alone than to settle out of loneliness and end up miserable. I’d be much happier going solo if those were my only choices…so I thought.

I take my dog to the park every day. There’s usually the same cast of characters and we are all familiar with one another. We could rattle off a list of the names of each other’s dogs, but if we were quizzed on each other’s names, it would be an epic fail. I started noticing this new fella in the mix and thought, “Hmmm wonder what his story is?” He had a cool vibe, a unique style and was sexy as hell. Something was stirring that I hadn’t felt in a long time. “Wow, where did that come from?” I thought.

One day, it was just the two of us, which was the first time we actually spoke to each other one-on-one. It turned out we grew up in the same town a block away from one another. We went to different schools but we knew some of the same people. It just felt really strange for both of us since I felt so drawn to him from the beginning and he said he felt chills when we figured out we had grown up so close to each other.

As time went on our friendship grew, we found ourselves breaking off from the pack, engrossed in conversation under a shady tree for hours, the whole time my eyes would wander to his cut biceps, thick thighs and hard as rock pecks. Yeah, he’s hot. I don’t need to know where he is every second, nor do I wonder ”What is he doing now?” I’m not missing him when we aren’t together. None of those “crush-like” feelings I use to get at the beginning of a relationship were rearing their head. To my surprise my reaction was, “I want to climb this guy like Mount Everest.” I want to continue to have our meet ups at the park, our hour long philosophical talks, laughs over our annoying family members, then I want to go back to his place and bang a hole in the drywall behind his bed with my own head. Is that so wrong? I really don’t want any kind of commitment. I don’t need to know what he’s doing when we aren’t together. I don’t want him to meet my family. I don’t even want him to keep a toothbrush in my medicine cabinet. I want a good old fashion booty call.

I’m not quite sure why I suddenly feel this way. I’m thinking it has something to do with my premenopausal state. I’m not at that age where I’m looking for a partner to raise a family. I’ve been on my own long enough, I can take care of myself. I guess at this stage in my life I’m finally realizing if I do meet someone I like, it can be on my own terms. I don’t have to follow any rules and I certainly don’t have to worry about people talking about my reputation. Really, who cares about that at age 47? I’m guessing any woman my age would be quite intrigued by a booty call life style. “Thank you very much, now go home and iron your own damn shirts!”

I still want to be the only woman he’s sleeping with and not because of jealousy or possessiveness but for health reasons. Health insurance is expensive enough – I don’t need to add medications for some funky sexually transmitted disease on my bill. Other than that, it just seems like the perfect situation. We would get our groove on and I would do the walk of shame with my head held high. I don’t know how he feels or what he wants. He told me today I’m very special to him and he wants me to be a part of his life for a lifetime. I hope that’s true, as long as that lifetime has a happy ending at least once a week.

Christina is a freelance writer on such topics as female indie artists, social media, and local events for both Examiner.com and CBSLocal Philly. She’s also an artist, social media consultant and a music junkie, and blogs about all the above topics incessantly. You can find her various blogs and articles here. Follow Christina on Twitter @cristinatweetz

More From Christina Thompson view all