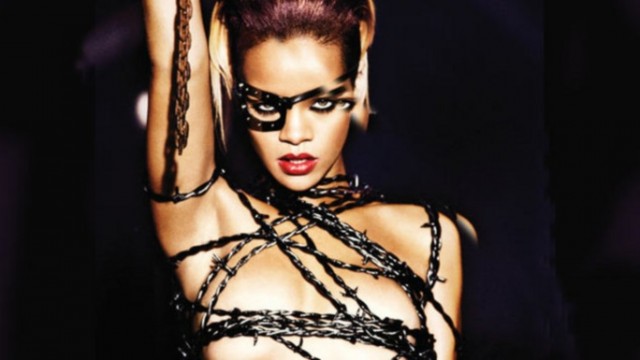 When it Comes to Sex, The Whips & Chains Aren’t Just in the Bedroom

In a post-Sex & the City age, people assume sexuality is given a free reign and that we also live in a post-gender-double-standard age. They assume that what would have previously been deemed “outrageous” female behaviour and voracious sexual proclivity is now all part and parcel of the Modern Woman, who cavorts with wild abandon in wonderfully glamorous nightclubs in a safe bubble of tolerance, picking and choosing her objects of desire as if there was a human vending machine catered entirely for her own gratification. Sorry, (fellow) Carrie Bradshaw enthusiasts and those of the post-feminist generation who insist that we are in fact already “having it all” – this isn’t quite the real picture.

Female sexuality, ownership of desire and sexual behaviour is more in the public domain than ever and currently a political chew toy over here in the UK and in the run up to the US election. Rush Limbaugh’s catastrophically misjudged – and now infamous – “Slutgate” just highlights the prehistoric attitudes in certain arenas (mostly of the Republican variety) with regards to sex. Hey, you want to protect yourself from unwanted pregnancy? You whore! You want to stop walking at the edge of a cliff so you don’t plummet to your death? You pansy! It shouldn’t go without recognition that in 2012, the year we currently exist in, where people say things like “feminists have got what they wanted now”, all the former and current Republican candidates – Mitt Romney, Ron Paul, Newt Gingrich and Rick Santorum – are fiercely anti-abortion. That’s anti-abortion, not “pro-life”. Pro-life is a moot stance since they blatantly couldn’t care less about the life of the pregnant female. Incidentally, when Rick Santorum dropped out of the race early, the painfully wry response was that “he should have been forced to carry his campaign to term”, but in reality the issue of sex rights is no joke.

The opposition to plans regarding covering contraception with insurance – indeed, the fact it is even a debate and not a given – shines a light on the regressive mind-set towards women and sexuality that a terrifyingly significant number of people have, who do not seem to grasp the endless, would-be-hilarious-if-it-weren’t-so-NOT-hilarious irony. A group of placard-wielding nutjobs who will berate a woman and deem her irresponsible for getting pregnant but still want to see measures implemented that mean this woman, in all of her sinfulness and irresponsibility, has to raise a child. Sexual politics? It’s only just the start.

“The personal is political” is like a tagline that ran underneath the feminist movement for many years and with regards to attitudes surrounding female sexuality, it couldn’t be more fitting. The expectations of young men and women and so much of my generation are informed by porn-set standards and pop culture’s inflatable sex dolls. Rihanna, with her dead-eyed, unrelentingly dull representations of pleasure, is inexplicably held aloft as the poster girl for female emancipation and sexual liberation. Pop culture still celebrates rigid representations of men and women, where hyper masculinity triumphs every time at the expense of women. Rihanna and those of her ilk make me feel like I’m living in the fable of The Emperor’s New Clothes. People marvel at her explicit lyrics, teenage girls hold her aloft as their untamed goddess, women even view her as the mouthpiece for adventurousness and free expression of desire, and I am the equivalent of the baffled child in the crowd shouting, “But she isn’t saying anything new at all!” Her brand is peddling a much distorted version of choice in which she is the willing subjugated toy.

The only acceptable female sexuality remains that which is performed and panders to male instruction or subverts the dynamic but unfailingly adopts the same power structure of the revered masculine/ denigrated feminine figure. The only acceptable male sexuality is that which enjoys watching women and chases aggressive penetration at all costs. Men are the fuckers and women are the fucked. Men are “being men” and women are “being sluts”. It’s a double standard that ultimately ties in with the notion most people inadvertently buy into of masculinity and femininity being intrinsic, inescapable structures and sex drive afforded to those with a penis. Oh, that’s a vagina you have there? Sorry, no sex drive for you. And if you claim to have one and pursue non-committal sex then you’re a slut, or desired by all and THEN a slut when you reject advances. It’s not just sex, it’s an all-out mindfuck. Trying to navigate through the minefield of misogyny-bred standards is the tip of the iceberg because girls buy into these notions too and are the sometimes the worst perpetrators of chauvinistic judgements. Then – as those who don’t want contraception covered by health insurance tend to forget – you might have the pregnancy. And if you don’t want the pregnancy, you go through the abortion, and all the shit that comes with it. And if you don’t have the abortion, you have a son or a daughter. And your son gets to a certain age and you’re meant to let go and watch proudly as he uses his penis as if it were a pen ticking the boxes. And your daughter gets to a certain age and you’re meant to hold on, or lock her in a tower and put a dragon at the bottom of it or let her watch Twilight and find out the dubious virtues of chastity for herself. And the whole cycle starts again.

When girls are hidden from this culture, it won’t help them, or prevent them morphing into Lolita 2K12. Covering up the row of breasts on the top shelf of a newsagent won’t deter that young woman from knowing that it’s there, but only foster her curiosity about it and force her to find out for herself. Not letting her watch Nicki Minaj’s new video won’t stop her from wanting to behave provocatively, because she’ll find a way to watch it on her own. Not allowing your daughter contraception won’t stop her from having sex, it’ll get her pregnant. Letting kids see the options, explaining them, deconstructing them in a language that makes sense is the only real way. Censorship doesn’t serve to protect, it merely promotes ignorance, guilt and confusion and achieves the opposite effect of what is intended. Similarly trying to “censor” birth control or preventing women from having abortions won’t stop them from having sex, it will lead to illegal, life-threatening abortions or unwanted children.

A new kind of dialogue is needed, one which discusses the representation of what makes the female sexual and demands our rights be heard. Diversity needs to be encouraged and displayed as part of the Internet’s supposed sexual multiplicity and on the screen both big and small that shows capable, independent sexual women whose strength is part of their attractiveness but doesn’t have to be fetishised and turned into whips & chains every time. Young women and men ought to be involved in these developments and these ideologies in terms of being educated about genuine, real tolerance and genuine, real pleasure, not left to their own devices and having their standards and ideas of “norms” defined by a culture that is far more sexually stunted than it thinks. Kids don’t need to be smothered in cotton wool. Women don’t need to be told what to do with their bodies and how many foetuses should or should not reside in them. “Dirty talk” is always on the political agenda, so let’s make sure we’re the ones writing the script.

Emma Smith is a 24 year old woman living in a town in the north east of England. She is a feminist, music obsessive, budding film buff and fashion maven, but of course, that's not the whole story. She doesn't think it's beyond anyone to change the world for the better, one word at a time. Follow her on twitter @GrrlStyleNow.

More From Emma Smith view all