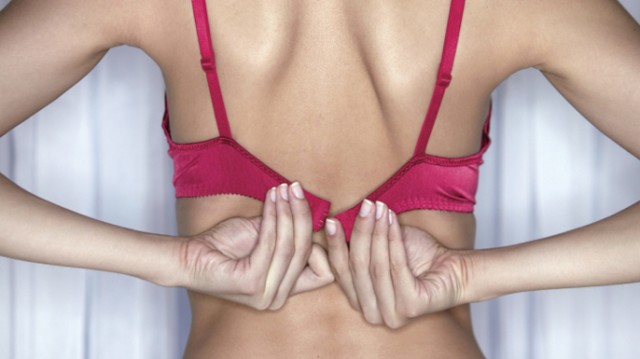 About A Bra: Sizing Things Up

I’ve never been that concerned with the size of my breasts. To me, they were adequate and proportionate and I’m pretty sure that’s all I’ve ever expected from them. Cup size is just a letter and that letter doesn’t define me.

But something happened the other day to make me wonder if that’s a universal feeling. Or if we’re being encouraged – mostly subliminally – to conform to the idea that: when it comes to boobs – bigger is better.

I was in need of a couple of new bras so I headed to the mall. I noticed some changes in the style I’m a fan of, but I went ahead and grabbed my usual size. My body hasn’t dramatically changed since I bought bras last year, so I had no reason to believe anything would be different.

I came home, tried them on, and was shocked to see they didn’t fit. Had I gained that much weight? What was going on? I went back to the store, where I was measured and assured that it wasn’t my inches that changed, it was my cup size. And the difference was dramatic.

One dressing attendant actually told another dressing room attendant, “Don’t put her in anything smaller than a D.”

A what? I mean, wouldn’t I notice if my ladies had switched from the B train to the D train? Seemingly overnight? This wasn’t making sense. D sounds huge. I’m not huge.

Dressing rooms are a pretty vulnerable place to be. There are the lights, the mirrors and the fact that you’re closely examining parts of your body under those lights and in front of those mirrors. Then to top it off, you have someone on the other side of the door offering her two cents. In this case, I felt like I had just learned something really important about my body and the attendant was my new best friend. She knew her job. She listened to my body image concerns and responded with constructive support. Now that I think about it, she was basically a bra personified.

I realize we as women are faced with body changes in a multitude of situations: puberty, augmentation, pregnancy, a dramatic weight loss or gain. I had none of those possibilities to blame. It felt like something out of a movie, like someone took the controls and – on a whim – decided to increase my bust line.

I couldn’t believe that was really the case, so I tried to think logically.

Then one of the attendants casually mentioned the new styles run small. Which makes it seem like bra designers (or this particular one anyway) are actually doing the opposite of what some clothing designers do when it comes to sizing. Have we reached the point in our society when instead of making clothes run big so you feel good about wearing a smaller size, bras now run small so you feel better about wearing a bigger one?

I was left to wonder if being told I was bigger than I thought made me feel better about myself. I’ve never felt bad about my bust size. Should I have? Did I need that boost?

I walked into the hallway of the dressing rooms (much to the delight of a young boy I hadn’t seen seated nearby) to consult a friend because I’m basically shameless, and OMG I have huge boobs now. Look at this bra. This is a D! When I walked into the store I had average boobs and mere moments later I was one step away from a double D. A double D! That’s like, really big.

I consulted several friends in a super mature way via text. They responded excitedly. It was like I got the effect of a boob job without the whole surgery thing. Except I don’t think you have to wear a bra when you get a boob job. And if there is one thing my girls apparently needed, it was support, which I had clearly been denying them. I didn’t know!

I don’t remember when I started wearing a bra. I realize that seems like a monumental thing in an adolescent girl’s life to forget, but I’m fairly certain the newness must have felt like this. I don’t feel like anything looks that different, but I have to admit there’s a fear now that they’ll go away as quickly as they appeared. That must have been how my adolescent self must have felt, and she had way less to be excited about.

I still feel slightly skeptical that it’s all a design tactic or marketing scheme, but I guess there’s no harm in being happy about it. Dear 14 year old me, it might take 20 years, but one day…your boobs will come in.

Mary Anne Bargen is a writer who lives in LA with her three pet skunks. (They live outside and aren't technically hers, but she named them anyway.) She believes there's nothing Nutella can't fix. She loves Airstreams, music festivals and outdoor movies. She likes board games, road trips and having fro yo for dinner. She dislikes scary movies, spicy food and lotion. You can follow her adventures on her blog.