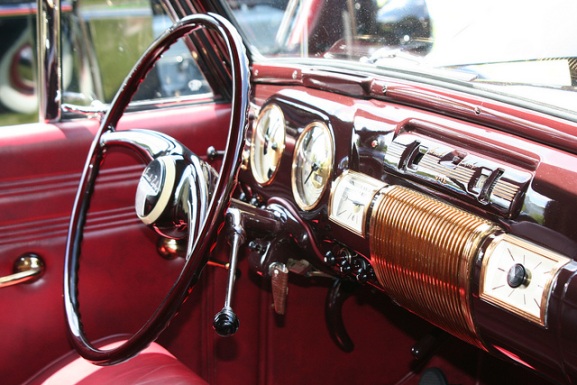 My Dad and I finally became friends last year.

Sure, we’d begun to get along once I escaped from the vortex of teenage insanity, but it took until last Father’s Day before we could sit face and realize everything was fine.

Every parent-child relationship comes with baggage. Kids go from treasures to wannabe equals to enemies to friends (hopefully – one day), but there’s a lot you’ve got to wade through before you can get to the good part.

Growing up, I thought my Dad was the bomb. Every weekend, we’d get up early, head to McDonald’s for breakfast, then drive around listening to an oldies station while my Dad told me all about growing up in the baby boom era. In the summer, we’d go to car shows in parking lots and he’d explain the difference between Thunderbirds and two-tone Chevys. We play-fought in Pizza Hut, and he’d let me see movies like Volcano and Star Trek 6.

But then I grew up. When you’re a kid (or if you’re me, more specifically), you don’t process the goings-on between your mom and your dad, so when you begin to see the cracks in their relationships, you also begin to see your Mom and Dad differently. I knew my parents weren’t perfect – they’re human, so they can’t be. My Dad and I both have a temper, so I knew not to make him made or risk a very loud lecture on why talking back would not be tolerated. I also knew that he got quiet when he was upset, and that he’d go for long drives and when he came home he wouldn’t say very much. I knew that sometimes he and my Mom argued, but being the age where you become defiant, I figured it was finally time for me to get involved.

Not smart. Without knowing the whole story (a big part of it being was that my Dad was taking care of his ex-alcoholic mother whose Alzheimer’s was quickly progressing), I made the type of quips most teens would whenever they hear a parent raise their voice. In response, my Dad would tighten the reigns on my curfew and/or computer time, so I quickly became the door-slamming, back-talking, “Nobody understands me!” poster child who quickly began flaunting her nightlife by coming home smashed and stuffing her face with pasta.

“I smoked a lot of weed and drank a lot of wine tonight!” I’d tell my Mom and Dad. My Mom would look at 16-year-old me and tell me she hoped I’d be finished acting like this soon. My Dad re-iterated the rules, and while I would follow them, it wasn’t without a remark that I’m sure hurt to hear.

This continued for a long time – not my behavior, but the tension. Despite not being given a curfew, I began to resent my Mom and Dad for caring. Being early-20s, I didn’t want to feel like I was disappointing them by staying out late, so my attitude continued despite there being a reprieve from the actual house rules. Luckily, by then my Dad and I found movies – so while the leftover issues from my teen years still resonated, when we saw Star Trek or Vantage Point or a Bourne movie, we were temporary pals.

And then I moved out. It’s amazing what distance can create, and in my case, it was the re-appreciation of my Mom and Dad. I realized they’d had to eat Kraft Dinner for days at a time, too – only they were newly-ish married and trying to raise me while they did it. No, they didn’t have mice like I did, but they knew how it felt to choose between paying a phone bill and missing a credit card payment. True, before I moved out, my Dad and I weren’t fighting anymore, but we still tiptoed; we’d have heart-to-hearts after a trip to Ikea, but within a few days something would re-ignite my resentment and we’d somehow both resort back into “Anne-as-a-teen” mode.

My Dad came down to see me last Father’s Day. He picked me up, we drove to Red Lobster (we roll extra cheese biscuits in napkins and bring them home with us – deal with it), and I ordered some wine. Within about an hour and a second glass we admitted everything: the last decade sucked, and it was equally hard for both of us to recover from the years of resentment, hurt and aftermath of both. Sure, I’d felt bogged down by rules and dynamics, but my parents were also still trying to make sense of being a Dad and Mom. There’s no manual. We all screw up. But for the first time since I was little and listening to Roy Orbison in the car after going to McDonald’s, I could actually tell my Dad I loved him without worrying about whether we actually liked each other too.

We do, but it took a lot of time. Now, back at home (which you can read all about here), we still annoy each other, but we annoy each other as adults – as equals. I recognize that I’m like him, and that he’s like me, but that we’re also different and to respect that. My parents’ dynamic is theirs, and what they’ve gone through in their 50-something years individually and their 27 years together I can’t even begin to understand in my measly 26.

Feminism is an idea and the whole point of ideas is that you spread them, and share them as much as possible. An idea is only as good and powerful and useful as the amount of people’s heads that it’s in.