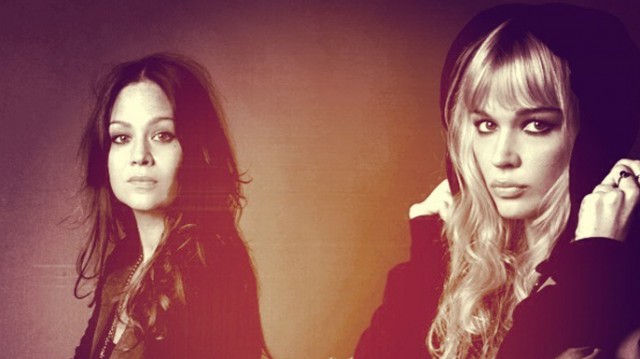 Catherine Pierce, along with her sister Allison are the duo behind The Pierces, a band they formed over 13 years ago. With an upcoming album (as of now it’s yet to be titled) coming out in the upcoming months, we asked Catherine a few questions about what we can expect from her latest disc, which is still in its infancy. In anticipation of her newest sounds, we also asked Catherine to dig through her iTunes library and shed some light on the songs that are currently on high rotation. Ladies and gentlemen, Ms. Catherine Pierce.

What can we expect to hear from the new album – song wise?
The next album will have a similar sound to our last record, but of course we want to keep it sounding fresh so we will definitely add new elements to make things interesting for us and for our fans. The main difference will be in the content of what we have to say. Allison and I have both been through a lot in the past couple of years and I think our change and growth will be reflected in the lyrics and the message of the album. When is it going to be released?
I imagine it will be released sometime this Spring or early Summer. We are still in fairly early days with it but it’s flowing along nicely so fingers crossed that that will continue.

What’s the album title?
We don’t have the title for the album yet, but there will be lots of good choices because the vibe is already so strong within the songs…I think a title will make itself obvious very soon. What was the recording/editing process like?
So far the recording process has been both challenging and rewarding. We had a bit of a false start and went in a direction that seemed like a good idea on paper, but ultimately didn’t feel right when we listened back. It’s always frustrating when you don’t get the results you hope for, but sometimes you have to get lost in order to find the right path to where you want to be. We are back on course now and it feels really amazing and exciting. I think we are making something really special. Any stand out songs that are the most personal to you?
I wrote a song called “Confidence In Love” that we are working on now and it’s special to me because for awhile I had lost my faith in romantic love. I was seeing relationships around me crumble and I had some bad luck in my own love life and it all just felt very futile. Then I met someone that reminded me of the beauty of love. I’ve since learned that true love is taking care of each other and holding each other sacred. A lot of our songs are about heartbreak, but this song is about the heart being mended.

My sister introduced me to this song and we listened to it over and over, driving around on a beautiful, sunny day. We are huge Beatles fans and this reminds us of their more psychedelic stuff. This whole album is really great.

Marina & The Diamonds “I’m Not A Robot”

This was the first song that I heard of hers and I just loved it instantly. Her voice is so interesting and sexy and I love the things she has to say. Her newer album is beautiful too.

I love this song and this band and I’m not just saying that because my sister and good friend are in it! James and Allison made this record together with Guy Berryman who produced our latest album and I think it’s amazing. This song is one of my favorites. They captured such a beautiful sound and vibe. James is such a talented singer and songwriter…in fact he wrote the song, “Glorious” that’s on “You & I”. It’s the only song that we’ve put on any of our albums that we didn’t write, but we just thought it was so special that we had to record it.

I love the contrast of the big, dramatic, electronic production and the tenderness of the vocals. It’s really intense and beautiful and evokes a strange, melancholy feeling in me.

This song is so tender and perfect. The lyrics absolutely floor me and his voice is so interesting, it reminds me of Sade.

I love everything about her. This song creeps up on you and plants itself firmly in your brain.

Solomon Burke “Cry To Me”

This is one of my favorite songs of all time. I love, love, love his voice and the lyrics. I think the first time I heard it was in the sex scene in Dirty Dancing when I was young so of course it stuck with me.

Mazzy Star “Fade Into You”

This song will never get old to me. Many have tried to copy this sound, but nobody else sounds like her.

My friends, Adam and Binki made a gorgeous album together. Binki’s voice is a heavenly instrument and Adam is a kooky genius. They make the perfect pair.

This is one of those songs that just grabs you because it’s so simple and gorgeous. I heard it on an episode of “Girls” and I Shazammed it immediately so I could find out who that haunting voice belonged to.

More From Yale Breslin view all