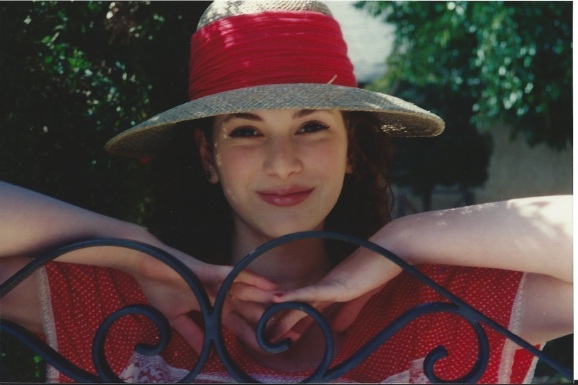 When Father’s Day rolled around this year, I decided to get my dad a greeting card. Not because he necessarily deserves one, but because I deserve to feel some peace around the situation with my father. Because, as a friend’s sponsor told me over dinner in Venice one night last year, memorably: You don’t have any idea what his personal hell feels like.

Only thing is, I kinda do. My father’s personal hell was so overwhelming for him that it became, by default, everybody else’s. My mother’s, my brothers’, my sister’s, mine. It became every waitress who happened to hit the jackpot and get the table with the irate man and his consoling wife and four tired, crying children. And the youngest, who refused to drink her milk and apologized profusely as we stormed out, led by my drill Sergeant father, because the food was taking too long. Over and over, like a bad Brady Bunch re-run, we went. But, instead of the one where Alice falls in love, this was the one where Marcia just kept getting hit in the nose with the errant football.

My father must have some real, true blue mental issue. One that’s undiagnosed and untreated. He refuses to see a doctor and has negative associations – for whatever reason – with mental health specialists and those who prescribe medication, and the actual meds themselves. Why is it that the people who have an abundance of real shitty problems spilling from their lives are the ones who say everybody else “has problems”? You know those people?

I was at dinner with my new friend Paul recently, and while tipsy and explaining the beginnings of the complicated relationship I have with my dad, it occurred to me – for the first time in my life – that I need to come to a forgiving place. Not that that thought has never crossed my mind. Because it has. By hell or high water, I’ve tried. It’s like cozying up to and hugging a volcano between eruptions. You try it. It’s super-fun! During our conversation, however, I came to grips with the fact that my father’s apparent mental illness is just that. An illness. And, if I am who I say I am – somebody whose life and art’s mission is to obliterate shame – then I have to at least move forward with the recognition that he is, in some ways, blameless. He did not choose to have a mental issue.

My mother never wanted us to be angry or “hold grudges” or discontinue our relationship with my father. The atrocities he inflicted, on a daily basis, were NOT excusable. Sorry. No two ways about it. If you’ve grown up in a domestic violence situation, then I need not say more. What she did was ceaselessly examine his childhood and remind us that he was orphaned, put in a boy’s home, had a schizophrenic, narcissistic mother and on and on. “He had a really bad childhood,” was the mantra. At what point, really, do we stop blaming our childhoods and pick up the friggin’ pieces and stop raising our hands at our children and our wives? I’m just wondering.

What she did do successfully, though, was alleviate any chance that we might have a process. Something between A: Our dad is a rager/rageoholic and Z: Forgive him. The middle was an amorphous blur of frenetic, metallic feelings whirling inside me. You know the dizziness of summers spent watching TV real close to the screen for eight hours, lying sideways on the couch, then getting up real fast when somebody screams your name? Feelings like that.

She also managed to make us feel something other than sheer fear and hatred for our Patriarch. Yay, Mom!

I don’t hate men. I never have. My grandfather is my saving grace. He showed me everything there is to know about what being a true, real man is about. Working hard, touching with a soft hand, uttering compliments to make a woman blush, telling dinner table jokes, watching old movies, encouraging me when I was incorrigible. He is the only man I’ve ever truly loved.

And of course, my father knows this. My dad is one of the most intelligent people I know. He is well-read, finds the loop-holes in systems, is a movie buff and gave me a sufficient Hollywood education. He is, for the most part, politically liberal, has Aspergers-like focus and drive, raised six kids on a self-made-man’s income, made sure we got braces, cool clothes, corrective shoes, saw all the right doctors, went to all the right schools, drove all the right cars, and lived in all the right neighborhoods. Everything he never had. What he still doesn’t understand, to this day (and trust me, I tried to explain this a few times) is that I would rather have lived in a two-bedroom apartment in Van Nuys with no laundry room, and have all of us be happy and feel loved and have PEACE, then live the way we did. His answer? You don’t really mean that.

(My father had two kids from a previous marriage who he financially supported until they were eighteen. This caused a major rift in my parent’s marriage, and while I saw my half-sister a few times in my life and met her three kids, I only met my half-brother when we were both grown and haven’t seen him since. I’ve always felt that they were equally fucked up by his absence as we were by his presence. My brother says they got the bigger slice of cake.)

When I was two, my father was working in the next room, and asked my sister to watch me for a few minutes. She’s only two and a half years older than me. I slipped on a bunch of pillows in the living room and cracked my chin open on the glass table. My dad laid my little body down in the kitchen sink and looked over the flowing blood and the gash, and seemed just so damn flustered. I remember his wild-eyed expression to this day. What I don’t remember, is that he said I kept blowing him kisses. I guess, I felt bad that he was so upset, and I wanted my daddy to feel better any way I could.

I don’t know how to make my daddy feel better. And, I haven’t for a long long time. All I can do is hope that my small gestures, like sending a silly Hallmark card (albeit two days late) and forwarding goofy emails, will reach his heart. Like a kiss. From his daughter. Who really does love her dad. Even if he’s fucked up.

Good fathers are direly needed. Even if your child didn’t turn out the way you hoped he or she would. Or you don’t or can’t communicate with them the way you planned to, forgive and trust the process. Maybe they are here to teach you more than you can teach them. Maybe, just maybe, there is some common ground to be found amid the silence. Time will tell.

Darrah Le Montre is a freelance journalist and consultant, with a focus on sensuality, environmentalism, and fearless women in the media.  Her lifestyle writing and celebrity interviews have appeared in Marie Claire, Esquire and W, among others.  She contributes author and filmmaker interviews to The Rumpus. Darrah’s column for SuicideGirls,“Red, White and Femme: Strapped With A Brain – And A Vagina” takes a fresh look at females in America. Twice monthly, Ms. Darrah co-hosts SG Radio on Indie 103.1 FM. She lives in LA with her doggie Oscar Wilde. Subscribe to her blog at darrahdejour.com and friend her on Facebook and Twitter @blyssdarrah
comments (16)

The body is so fair. It responds to what you do to it; whether it be good things or bad things. It’s very truthful.