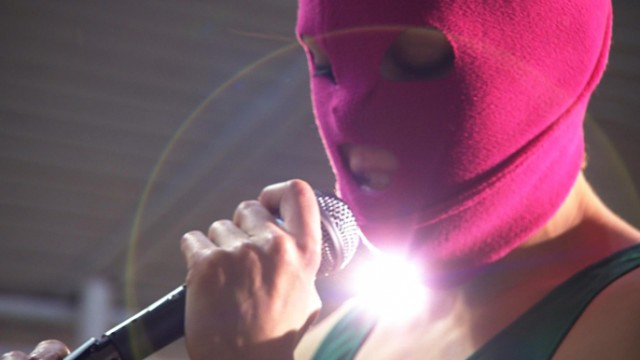 Freed Pussy Riot Member Katia Is On The Conversation

Pussy Riot is a Moscow-based band comprised of 11 different women. Their signature look, colored balaclavas, as well as the use of nicknames, help feed the mystery surrounding their identities and enhance the intrigue of their very public, guerilla-style performances .

In early 2012, five members of the group staged a show in Moscow’s Cathedral of Christ the Savior. The performance, which, like their other performances was edited into a video and posted online, was entitled “Punk Prayer – Mother of God, Chase Putin Away!” which was a public plea to the church to end their ties with the leader.

A month later, two members of the group, Nadezhda Tolokonnikova and Maria Alyokhina, were arrested, charged with hooliganism and are still being imprisoned . Nearly two weeks later, Yekaterina “Katia” Samutsevich was also arrested but has since been released .

The trial gained international media attention and has garnered a massive show of support from the entertainment community and activists worldwide , who strongly feel the  punishment  is seemingly  incredibly severe considering the crime .

Amanda will be talking with Katia herself, and we want to extend an offer to you, our readers, to submit a  question of your own.

We can’t wait to share with you this interview, and we know you’ll be watching with us when HBO airs this powerful documentary all about Pussy Riot .

People sometimes can’t comprehend that you could look a certain way and have a personality
and be smart.