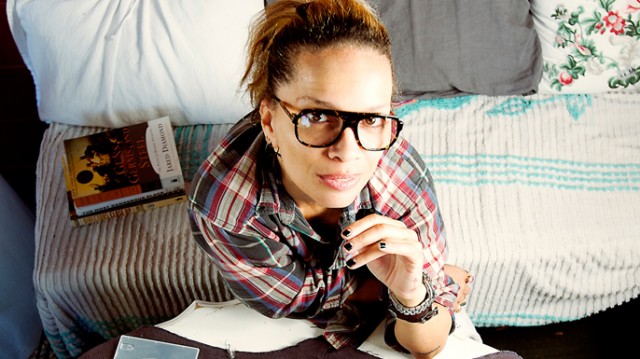 This Friday, filmmaker Victoria Mahoney will unveil “Yelling to the Sky” to the world, her first feature film which is based on a semi-autobiographical nature. Culminating in a stellar cast including Zoë Kravitz and Gabourey Sidibe, her tale unravels what has been deemed a poignant yet sobering coming-of-age tale that is transcended into a world of reckless ambivalence. Here, Mahoney chats with The Conversation about the importance behind her medium and message.

December 14th marks the opening of your first feature film “Yelling to the Sky” in which you took on the roles of director, writer, and producer. When you think about this film in its completion and entirety, how does it make you feel?
Whenever I think about this film, I’m struck by the amount of people who contributed to bring it into completion. Which offers an indescribable sense of calm. However, when I think about what it needed in the distribution stage to bring us into closure, well, those thoughts are and will always be the very opposite–of calm. You were named one of, “25 New Faces of Independent Film” by Filmmaker Magazine, one of ShadowAndAct/IndieWire’s “Filmmakers to Watch” and one of, “3 Filmmakers to Watch” in Elle Magazine’s, Women In Hollywood issue among many other accolades. Do these matter to you?
Having work honored within a community by your peers will never be small to me. But let’s exclude [me] from the equation. As it happens, I respect the intention behind each of those titles and until the playing field is finally leveled, community support for outliers is crucial. With that said, when I go home at night, my worth isn’t altered in the slightest by externals. Nothing about me as a person or filmmaker is altered from external approval because my value–is nestled in between the indescribable moment when I slide a lens up to my eye and later observe what was captured. It’s rooted in a nanosecond of authentic exchange–between humans. The only thing that markedly changes is, watermarks and stamps make people in the industry excited to know you. Each watermark allows them to feel smart about returning your phone call or possibly demanding their boss finance your next film. Your first feature, World Premiered in “Competition” at the 2011 Berlin Film Festival, where it was nominated for the Golden Bear. But most importantly, you were the first ever mixed-race American woman, writer/director and the third American woman, writer/director in sixty one years to be invited into Competition at The Berlin Film Festival. What was your initial reaction when you found out?
My initial response of course, was solely as a filmmaker. Meaning, I was incredibly warmed for the labor and loyalty of our cast and crew. Then when I heard the stats, I was enthusiastic about being a part of progression but every time I participate in breaking a racial or gender statistic, I ache for how stagnated ‘we’ as a film industry and ‘we’ as a people remain. The idea that film is an ‘artform’, some might call ‘liberal arts.’ Yet, the landscape of American politics has excelled in a pointed matter of race, far-far beyond the ‘film’ world. That very thought has kept me awake at night. Let’s pause to consider the social implications and surreality of; ‘Politics in America breaking racial bounds that have yet to be shattered throughout, Film in America.’ Utterly, frightening.

You’ve also managed to score an all-star cast for your film. What did some of the actors teach you about your craft throughout the process?
I live for the unknown elements actors offer when bringing a character into being. I love bearing witness to the unfolding. The actors in this film taught me what I’ve always suspected and now know for certain; great actors respect the safety to explore and they will fearlessly dive into the darkest parts of themselves–to reveal truth upon truth.

On Film-making: An Introduction to the Craft of the Director

This Friday, filmmaker Victoria Mahoney will unveil “Yelling to the Sky” to the world, her first feature film which is based on a semi-autobiographical nature. Culminating in a stellar cast ...

You can’t honor MLK by forgetting what really ...

You can’t honor MLK by forgetting what really happened. Don’t just make it about pretty speeches. His was a fight against poverty and for the liberation of Black and other people of color. Act to dismantle systemic oppression - that’s what this moment and his legacy demands. Repost from @sistersong_woc ...

Don’t let a bad experience keep you from falling in love again. Don’t let it make you build a wall
because as much pain as you feel now, love is worth it. It’s worth taking a chance that you might
feel pain.