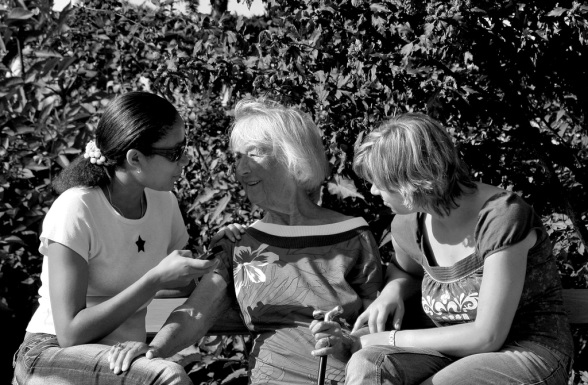 What exactly is a “girl”?

Is this word derogatory when used in any context but a literal one, as in: a child who happens to be female? I ask because these five letters strung together—G-I-R-L-S—have been on my radar a lot lately.

Exhibit A: the dude at my local Starbucks. He slings java; I crawl in for it every morning like a smack addict chasing her fix. I refer to him as Dude because he’s barely 20, has the look of someone who smokes weed and surfs, and speaks in that half-chortling, “Jeff Spicoli” sort of way. (I live in Santa Monica, Calif., so no surprise there.)

Most days I have my 4-year-old in tow. Sometimes Dude is at the cash register, sometimes behind the coffee bar steaming up my nonfat latte. Whether he takes my money or hands me my drink, he utters some version of this sentiment: “Thanks, girls.” Or: “There you go, girls.” Or: “Have a good one, girls!” He always addresses the two of us, me and my youngest daughter (who, yes, really happens to be a girl), in the plural. So he’s got it half-right. On the rare occasion I’m on my own he greets the crowd, meeting my line of vision before scanning beyond it to the women surrounding me and shouting: “Morning! What are you girls having today?”

He’s not unfriendly. He provides fast service and a piping hot cup-a-Joe. So why am I so supremely irked every time he opens his effing mouth?

Maybe it’s because I’m old enough to be his mother (albeit one who occasionally drops the “f” bomb). Maybe I’m cranky because I haven’t had my caffeine and I’m in no mood to flirt — because it’s clear he finds himself a real charmer. Or maybe it’s because somewhere along the line this pimple-faced kid learned it was perfectly okay to address the opposite sex – including fortysomething moms like me, ankle-socked preschoolers like my daughter, plus the white-haired pensioners queued up in front and behind us as “girls,” the whole lot of us. In his mind, we’re all girls. A sugary, spicy and everything-nice collection of them.

Which begs the question: What year is this, anyway, 1962?

But wait. Surely we girls sometimes use the term, too? Of course we do. (This is not unlike the “N”-word debate, without the terrible and specific history attached, in that one group is permitted to use a word freely while another is soundly denied. Although both broker in paternalistic minimization.) But we women enjoy our Girls’ Night out on the town, don’t we? And we often get together for some “girl talk”!

And what of Lena Durham’s awesomely uninhibited new HBO show, Girls? Critically acclaimed and teeming with bared tits and ass, it follows four young women perusing the hipster playground that is New York City. And while these girls do plenty of swinging, it’s not the kind you find at the park. Can these dewy-faced dolls, in their early twenties and in search of their rightful identities, be considered “girls”? Or is the term used playfully with a clear nod and a wink? (Sort of like when Madonna — you know, my generation’s Lady Gaga—said: “C’mon, girls! Do you believe in love? Because I’ve got something to say about it, and it goes something like this…”)

More likely than not Dunham’s title refers to the extended adolescence she and her friends enjoy, one that seems to grow ever longer and is more reluctantly let go with each subsequent era. And speaking of Gaga, (who is now 26) the ripe age by which my mother had already been married for six years with three children at her hip — the bajillionaire pop star is not quite considered a grownup, either. Not if you listen to her buddy Elton John, anyway, who recently mused to Rolling Stone about her tough touring schedule: “How does she do it? … She is frail and she doesn’t eat when she should do, she’s a girl and it’s tougher for a girl…”

Is it tougher for a girl? (A sentiment to which Madonna would likely roll her eyes and snap into the feminist anthem, “What It Feels Like For a Girl” before segueing into a mash-up of “Born This Way” that is really honestly just a remix of “Express Yourself.”)

Still, maybe Dunham is making a point by naming her show Girls even if she didn’t mean to do so intentionally. Because in a culture where grown women are expected to wax their bodies to resemble hairless pre-teens and no one dares to admit to growing old, clinging to childhood is more than an act of desperation, it’s down right mandatory. Why should we take seriously the plights of four (girlishly) adult female semi-professionals with big dreams? Better to temper their travails than to call this sophisticated series by something more accurate, something like “Women.” (Could such an entitled show even get made? It sounds far too threatening…) The irony, of course, is that while these characters navigate particularly un-sweet situations such as sexually transmitted diseases and the grim fact of unwanted pregnancies — even abortions (gasp!) and on TV, no less! — the real-life lawmakers in Washington who govern us hold congressional hearings on the morality of contraceptives (again, is this 1962?) with an all-male, ultra-religious panel of so-called experts pronouncing them unacceptable. Even as women’s health clinics are being closed down, state by state and access to family planning and physical autonomy flatly denied.

But let’s downplay women’s issues. Let’s take them down a notch. Let’s make them the mere irritations and setbacks of young girls. And don’t get me wrong; I adore Dunham’s ensemble piece. It’s the freshest, most realistic depiction of women and sex I’ve seen, maybe ever. But Dunham did bait this issue by naming her show as she did…

The “girls” debate was had decades ago — our mothers, Gloria Steinem and her ilk believed it was won. And yet, here it’s back, and in a new, more insidious form, one that takes on an almost cheeky tone. But beware, ladies (and I won’t do the injustice of assuming you are one), because cultural trends mirror something bigger, something nebulous and as yet unarticulated. You may not see it clearly; it may be all forest for the trees just now. But between the current onslaught of legislative maneuverings that swallow women’s rights whole cloth, the willing acquiescence of adulthood well into our twenties — we’re almost begging to remain child-like and responsibility-free — and a slow slide into retro-fitted nostalgia (I’m a stay-at-home mom these days and no one loves Mad Men more than me), I think women and girls are losing ground. And our lexicon is just another sign of it.

Which is why, I’ve decided, the next time I score my daily habit at Starbucks I won’t be the only one brewing. “Thank you, Boy!” I intend to say as I take my piping hot latte from Dude. But I promise I’ll say it pleasantly. And with a smile.

I’m lucky enough to have photographed this ...

I’m lucky enough to have photographed this magical human many times over the years. I have a big section of my archive that is just Keanu pics. Some we did for magazines and others are personal moments in time from our friendship of 30 years. It’s a profound experience to document someone’s life over such a long period of time. #ChosenFamily #AdeCArchives ...