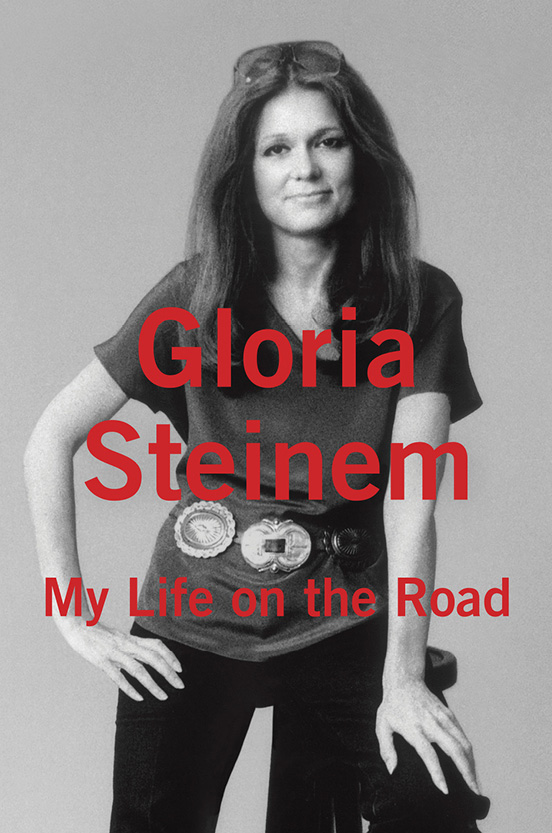 As I am reading her new biography My Life on the Road and feeling so insanely inspired, it seems timely to share this unpublished interview I did with Gloria Steinem where we talked about many things, but the first thing I wanted to know about was this…

AdeC: Which we’re not.

GS: Which we’re not, on the contrary, we’re trying to say that cooperation beats domination.

GS: For everybody. So I find it helpful to have a different word cause eros means love and pleasure and free choice and pornae means female slavery. It’s there in the language.

GS: What we need to do is make a positive effort in getting real sex education in the schools and into kids’ lives. And part of it is empowering individual women who feel scared by this stuff to say- You can put it out of your house. You can say “I won’t have any. I won’t have anything to do with people who buy it. I will object to it.” It’s about empowering each other to say what we’re thinking.

GS: Get a divorce. Or move out. If that women were Jewish and that guy was an Anti-Semite, she would move out. The only reason that the Anti-Semitism is taken more seriously than female hatred is because it affects men too.

GS: It may take time because we don’t transform ourselves overnight. But just as battered women have to leave two or three times before they’re able to really leave… I would say the same is true with pornography. Get another guy.

GS: And especially boys when they’re insecure and they don’t know what sex is and so they- they kind of know that it’s not right but they’re afraid to say that to their peers. Many rapes are gang rapes because boys by themselves or men by themselves wouldn’t do this, but the psychology—

GS: Most men would be kind of shamed to go to a prostitute, but in a group…
And most men don’t understand that the average age of entry into prostitution in this country is 13.

AdeC: Again, when you put it like that, when you say this girl likely is not here by her own volition. What little girl says “I’m gonna have a career as a prostitute when I grow up.”

GS: So far in my life, and I’ve been doing this a long time, I’ve only met one woman who was there by anything like her own volition. The rest either had been sexually abused in childhood and thought they had no other value or they were trying to eat, you know?
In the street they call it “survival sex.” They do not call it sex work, that is an invention of, you know…

GS: Well I don’t know, I think actually we have to cop to it. I think maybe the women’s movement was somewhat guilty of talking about sex work with the idea that it would give some power to those women.

AdeC: Right, that it was work, it was a job- it was elective.

GS: Yeah, which of course it is not – I stopped saying it the minute I sat in Calcutta in Sonagachi, which is the biggest brothel in the world. And there are signs all in Bengali or Hindi and the only English is “Sex Work.” And you look in the door and there are 7-year-olds. 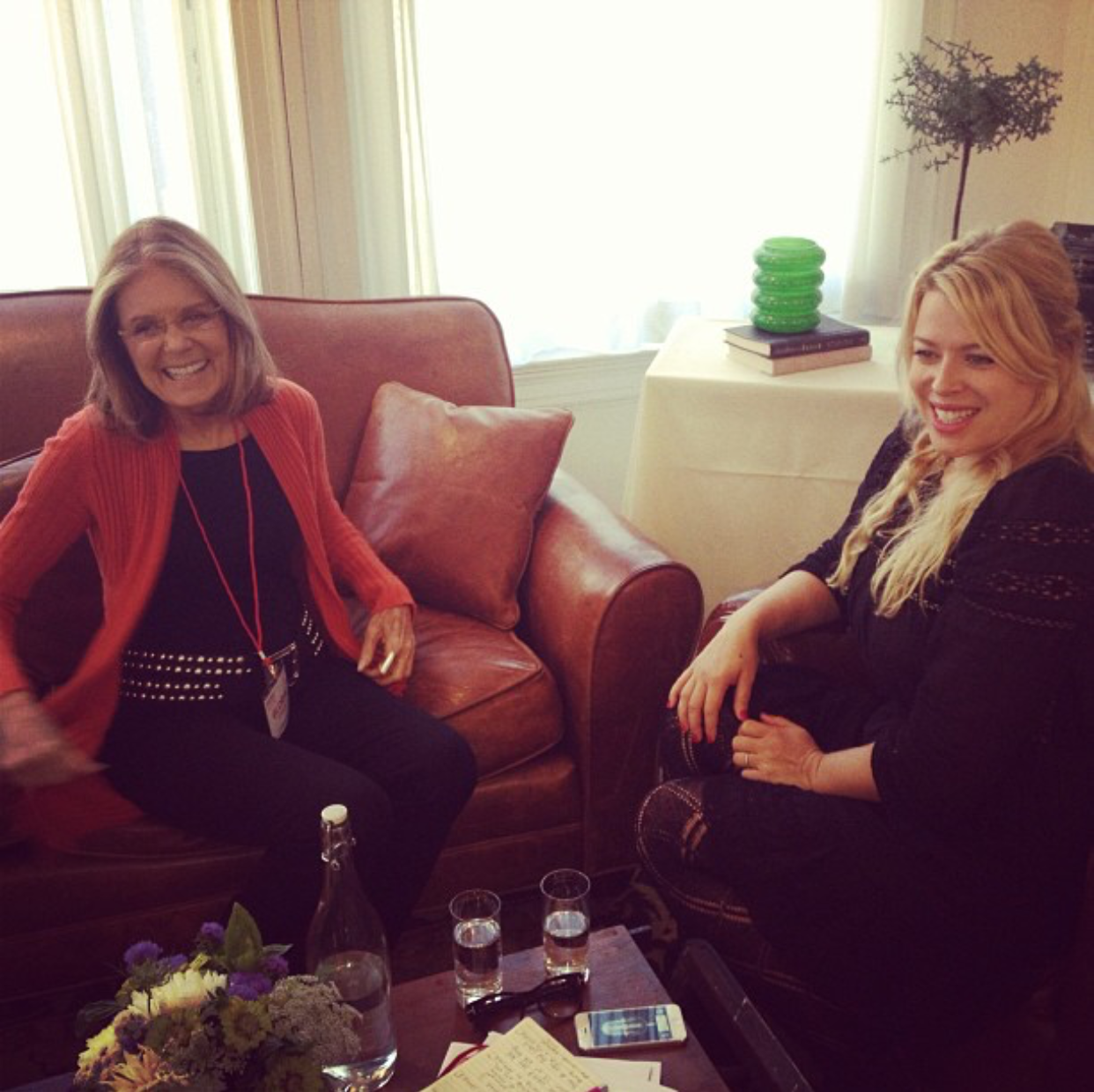 AdeC: So when I interviewed Jane Fonda, who I know is a—

AdeC: Yes. She talked about how we put so much focus on raising girls, but actually as mothers to sons we need to also focus on how we’re raising our boys, which I thought was a really valid point, cause it is starting with us.

GS: Well it – no, it’s not starting with us. The fathers are as responsible.
There was not a star in the East here. We didn’t do it by ourselves.

AdeC: I understand, but also as our participation as mothers, how we’re educating our boys and how we’re raising them with what kind of principles?

GS: That’s true, and I think we have always paid attention to boys… always. But they need role models. We do what we see more than what we’re told, so we can’t take responsibility away from grown up men who need to be loving, nurturing fathers. Until men are raising the children as much as women, it won’t work.

AdeC: I do see that shifting, and I fully agree with you.

GS: There are men who fully are parents. They’re not “babysitting” their children.

AdeC: I do see more fathers walking around wearing those Baby Bjorns strapped to them. They’re doing it.
Because there are more and more women going to work and the man is a stay-at-home dad.

GS: It makes a huge, huge difference. My mother was not well, so my father – by accident- raised me much more than most fathers. So I know you know that men can be as loving and nurturing and—

AdeC: Did you grow up with the safety of having a present, loving father?

GS: Yeah, I wouldn’t call it safety exactly because he was not a grown up himself.
He was always in debt, you know? My big memory of him was that he always had to park the car very far away so the finance company couldn’t –

AdeC: If they came to the house they wouldn’t know where his car was.

GS: Right, and he would send me to the door because if it was a bill collector what were they going to do with a 5-year-old? No, Daddy isn’t home. So he wasn’t Mr. Responsible, but I didn’t care because he loved me. He loved my company.

AdeC: How did that affect your choice in men?

AdeC: Oh my god, that’s amazing, only one?

GS: I’m still friends with all my old lovers because they’re good people.

GS: I chose good men.And some of it is luck too, because I could have gotten a violent man without knowing it. I’m not saying that it’s all controllable.

AdeC: No, but I also think what we’re attracted to is largely dictated on what our experience of what love is.

GS: That’s true. All the men in my life with one exception have been really good people.

AdeC: What do you think about the fact that there’s a whole new younger generation of women like myself who identify as feminists?

GS: There’s many more of you than of us. Again if you look at polls, young women are more likely to support feminist issues than older women in general. The media gives the impression that there are no young feminists because they’re trying they’re hoping it’s over.

AdeC: Does it surprise you that you are such a role model after so many years?

GS: Yes, it does surprise me. But what happens with movements is that there are movement people and then by success people get drawn into particular areas and they become less visible as part of the movement per se.

AdeC: But it is interesting that everyone who has been involved in the feminist movement, from the beginning, you are the woman who, certainly people of my generation still talk about like “Oh my gosh, Gloria Steinem.”

GS: Part of it is that my work is media. In the 1930s I would have been called a “media worker.” So I’m just more visible, but it doesn’t mean that I’m doing more than somebody who’s a scientist. For instance, in California Aileen Hernandez should be better known than me because she’s been active longer than me. She lives in San Francisco. She was the first woman and the first black member of the EEOC, was the president of NOW. She was huge- decades and decades of accomplishment. But because she’s not in the media per se, and also because people don’t understand that black women were more leaders of the women’s movement than white women, she’s not as visible.

AdeC: Well, speaking of these young feminists… What would you tell your 14-year-old self?

GS: We can still evoke that child in us and say, “I’m here now, I’m grown up. I’m strong, and I know that you didn’t get what you needed but I’m going to give it to you now.”

AdeC: That’s beautiful. Thank you. Thank you for your time, really. I’ve so enjoyed speaking to you. 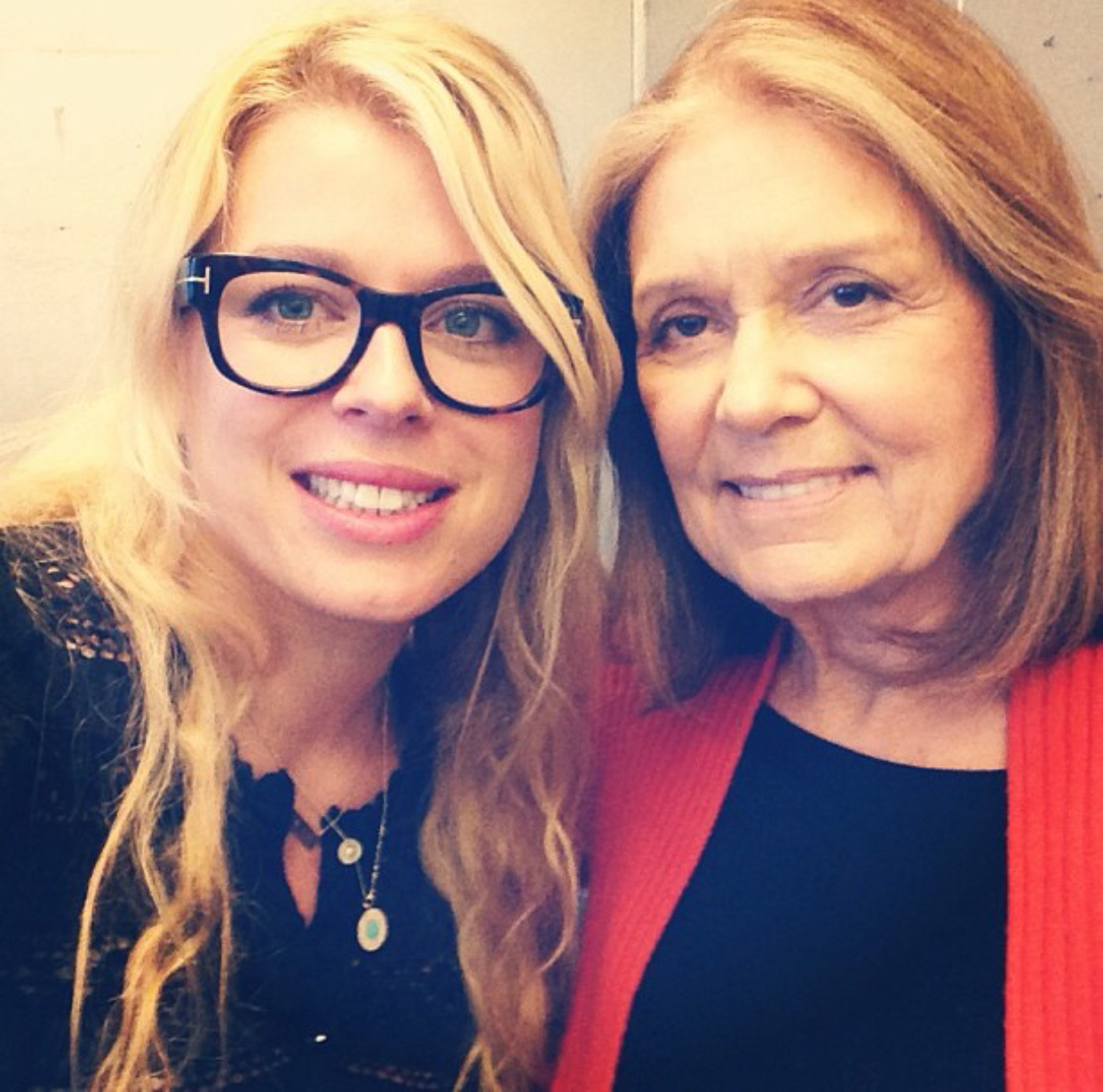 I got fired from McDonald’s. I tried to instill a recycling program.