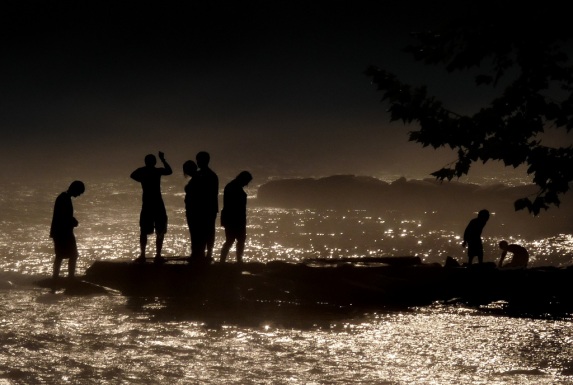 I’ve been feeling out of sorts, and I realized it is because this week is the 11th anniversary of my Dad’s death. He died on a Wednesday, we buried him on Friday and that Sunday was Father’s Day.

My father was a charming and charismatic man. He was the mayor of my hometown in the 1970s. The Optimist Club even awarded him the lauded title of “Man of the Year”. He was so loved, in fact, that we had to schedule visitation with his body on two consecutive nights at the funeral home, so our friends and neighbors would have enough time to come and say goodbye.

My mother fell completely apart when he died, and when she went to pieces, the life that I had known began to break away as well.

Every Christmas we sent out a family card with our picture on it: The Famous Lumpkins. Five smiling faces. No one knew the deep river of sorrow that my pretty smile covered up.

When I was growing up, I felt a horrible, almost unbearable need to make my parents understand how much I loved them. Along with that pressure was a feeling of guilt — a sense that I would have to equally ration my love between my mother and father, so that neither of them felt cheated. The thought that either of them might think for a moment that I didn’t love them would cause a stabbing panic in my heart. I did not realize back then that my overwhelming desire to show them my love was actually a desperate attempt to feel loved by them.

Every year I am dealt a double-whammy: I’m sad because my father is dead and therefore cannot celebrate Father’s Day. Far worse than that is the thought that I shouldn’t be celebrating my father at all, because he sexually abused me.

I still struggle with the concept of my two fathers. Daytime Daddy was a really great guy, funny and kind. After-Midnight Daddy was a looming, sinister shadow figure. It is impossible math to make two become one. Therefore, I have become proficient in Olympic-quality mental gymnastics, which allows me to love Daytime Daddy and despise the “stranger” in my bed.

In my next column, I will bring an expert in to help me better understand why I compartmentalize my feelings for my father, and figure out how to move forward with an integrated portrait of the man.

If you need help with sex abuse, please contact Darkness to Light, an organization with the mission to eliminate childhood sexual abuse. You can find information at D2L.org.

To read Part One of this series, click here.