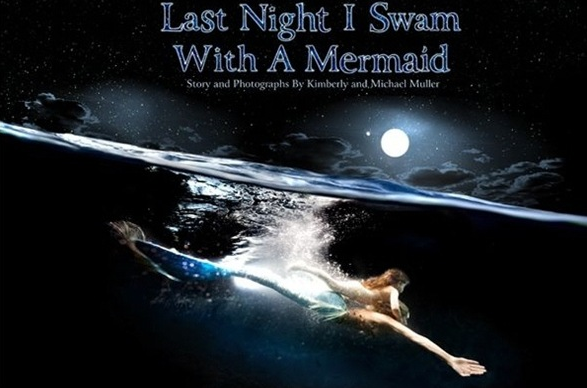 My friend Amanda asked that I write something to contribute to her amazing new community,  The Conversation… Inspiring women talking openly and honestly about the trials and tribulations of life, love and the pursuit of happiness. Who wouldn’t? It is exactly what my girlfriends and I are doing right now in my living room. It’s an honor and a privilege to share why I wrote Last Night I Swam with a Mermaid.

Life has a funny way of putting you exactly where you are supposed to be at any given moment. Everything I have ever done leading up to this moment, I look at as boot camp.

At this moment, I find myself taking a brief interlude inside of my bubble looking out at the scene before me. There is a whole lot of estrogen going on: eight little girls ranging in age from 5 months to 9 years, four moms and 2 grandmothers huddled on the sidelines, three dads finding refuge on the couch watching Nascar, football… something that enables them to quickly escape.

It is mayhem, but I am not fazed as I look out from my bubble, the “boot camp” training comes in handy.

We have just come home from an afternoon at the movies watching The Lorax. I cried, but I always cry in movies and during Broadway shows, that’s who I am. That’s why I write books that are written to the little child in all of us. I hear the words of Dr. Seuss: “Unless someone like you cares an awful lot, the world is not going to change, it’s not.”

The mélange of girl power has created a rap version and they are dancing to the beat of their own tune. The girls are discussing the movie they just watched – very different then the movie I watched – and that’s great. As parents, we need to remember that our kids experiences are their experiences and not ours.

I know – it’s so hard. Being a mom is probably the hardest job I have ever held. It’s why I wanted to write a book that both parents and kids would want to read. The books I want to read and the books my girls want to read usually are not the same books. I am referring to the children’s books that clutter the bookshelves in their rooms. I am always so curious as to why they love the ones they love and act as if they are doing me a favor when I choose.

I am quickly pulled out of my bubble when my 7-year-old remarks, “Mommy, did you notice the girl in the movie looked like you?” – all redheads look like me according to my children, including Bozo the clown -“Red hair, green eyes and she was trying to help the world one tree at a time… just like you, Mommy.”

I realize… exactly. The fact that my girls see me making a difference encourages me to continue. I must be doing something right. This is one of the many things that ignite my fire. A couple of years ago, that same 7-year-old inspired me to write Last Night I Swam With a Mermaid. We were at the IMAX Theater watching Under the Sea when she announced it was too depressing and she didn’t want to watch anymore. It was the seals swimming into frame and the narrator announcing they had nowhere further to swim south as a result of the water temperature and global warming.

The truth is, it is depressing the state our world is in. And it’s our job as parents to educate our children, to keep them in the “know”, so to speak – or not. It’s a fine line, knowing too much or knowing too little. But we do our kids a disservice by protecting them from what we think may be too much. I feel it’s important to engage our kids and to show by example that it’s not about how we can make a difference, it’s about the fact that everything we do is actually making a difference. They need to be aware that every choice they make has a consequence.

Like The Lorax said, “Every seed we plant is not just what you see, but about what it is going to become…”

I wanted to show my kids that we can do what we can touch. For you it may be one thing, for me something else. It’s every little thing coming together- we all have a job; we all must work as a community. We all connect, which is why we must respect, protect and not expect from one another, our planet and ourselves. This was an important message I wanted my children to understand.

My husband and I saw early on that our three girls loved the big art and photography books that sat on our coffee table. So we decided to make our own – a book for the kids, by the kids. As a mother of three girls, it is my duty to inspire and empower them. I saw a need for a fairy tale to one’s self. A story that shows children that they are their own knights in shining armor,  a story that teaches them that everything they need is within and that they have a choice to be the cause or effect in whatever situation life may present.

Some princesses get married, some don’t… I grew up thinking a prince on a white stallion was going to ride up and rescue me and brush my hair. This is what I learned from the stories I wanted to hear over and over again. Then I spent years figuring out he wasn’t coming.  As parents, we must give our kids the tools that will help them to navigate through their own journey. Support them in discovering their passions and like Einstein said, “actualize what we visualize”. I like to say, “DREAM BIG!”

A screaming kid pops my bubble and I am back, quickly taking stock in the situation at hand. I see some moms trying to get involved; the grandmothers sip their tea and the dads resume position on the couch. I am a firm believer that it takes a village, that everyone has their role and when we work as a team, we are all united. With that said, I understand that the men need a timeout now and again. A woman’s capacity to embrace the whole lot of estrogen going on in my living room is much greater. I am going to jump in now…”Who wants a popsicle?”

Great moms are queens of distraction. Two little girls start to bicker again. I ask who remembers the Mermaid Mantra? “Open your eyes and heart and mind, see and feel the magic you will find… whatever you need it’s all inside.” There is silence.

Last Night I Swam with a Mermaid is the little book that is making a difference. We have partnered with Philippe Cousteau’s EarthEcho.org which inspires youth to be the change they want to see in the world.

You can read more from Kimberly on Twitter @kimberlyjmuller.

Born in Washington D.C., Kimberly Muller spent years representing directors at Original Film before opening the west coast offices of Sunshine Interactive Network, where she raised a stable of talented directors while producing commercials and music videos. Two years later, she was presented with a script she couldn't refuse and she began her own production company, Conspiracy Entertainment. After producing two successful independent films, she retired to produce her own family. Inspired by her three daughters, Kimberly wrote a children's book, The Adventures of Fifi & Noni, which is currently being adapted into a young adult novel. She has finished her second children's book, Last Night I Swam with a Mermaid, coming to a bookstore near you this fall.
comments (0)