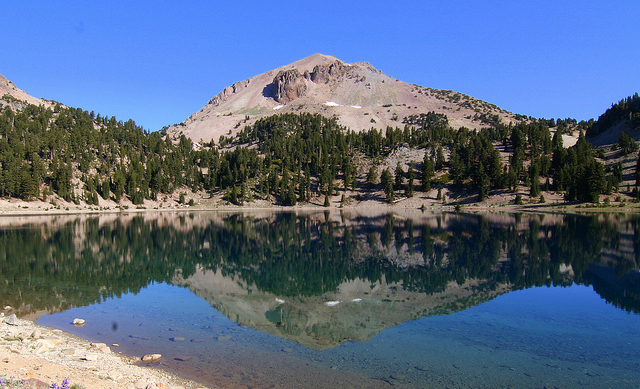 I Tried to Climb a Mountain

It was approaching midnight and the full moon brightly illuminated the mountain’s face. I found myself half a mile from the top of Mt. Lassen, a plugged-dome volcano in Northern California’s Lassen Volcanic National Park. My legs were trembling, my sweater too thin and my breaths were shallow. As I stumbled across the slippery slope of snow, I wondered briefly if this would be the place I died. No, I had not been stranded by a freak airplane crash. I had simply made the grave mistake of agreeing to a night-time hike up a mountain in the summer. What can I say? It had sounded like fun.

For the experienced climber, Mt. Lassen is a breeze. One hiker passed me on the trail three times – once going up, once coming down and once going back up just for kicks. I think the third time he waved to me, in shorts and a shirt as I shivered in my warm winter clothes, I began to hate him a little. I am no experienced climber. My idea of a hike is a jaunty stroll around the neighborhood with my dog. However, I always have thought of myself as an outdoorsy type, so when my friend Anneke invited me to make the hike with her, I immediately said yes. I like hiking, I thought. I’ve gone camping a lot. I obviously vastly overestimated myself — a few nights spent in a tent does not equal the tenacity required to climb a mountain.

With an elevation of almost 10,500 feet, Mt. Lassen can be hiked in half a day. It is only about five miles round-trip, but couple that with high altitudes, steep inclines and low oxygen levels, you have got yourself a challenge. I did not know any of these facts until after my hike was over. I firmly suggest that before you let yourself get suckered into a mountain climb, you read up on the stats in order to avoid asphyxiation at 8,500 feet, wondering where it all went wrong.

I thought everything was dandy on our drive into the park. I had a fanny pack with snacks and water in it, a headlamp and some sturdy tennis shoes. The group I was hiking with were all locals and almost all of them had, at some point in their lives, literally ran up the mountain and back. In retrospect, I should have taken that into consideration when listening to them tell me “It will be pretty easy” and “It’s not hard at all!” I began to become nervous when we pulled into the parking lot at the trail base and peered at the gigantic cliff face looming above me. I gulped and I gulped hard.

My first clue that I was underequipped for this was when I needed to stop for a breath at the first switchback in the trail. Small children were skipping by me. Skipping. I felt like a failure and I was sorely embarrassed that I was holding up our whole group. Luckily, my friends are kind and did everything they could to accommodate poor “flatlander” me. Our group eventually split up, leaving Anneke and I behind so we could go at my slow pace.
The first mile and a half I spent panicking while trying to simultaneously get all the air I could into my lungs without sounding like a dying rhino. However, as I took a breather sitting on a rock on the side of this mountain, I watched the sun set behind the peak. I looked out over the basin and the surrounding mountains and saw forest everywhere, tinged golden by the last sun rays. It was the most beautiful vista I had ever laid eyes on.

And then I had to keep climbing some more.

However, that moment was a breakthrough for me. I was able to look outside myself and realize there is a much bigger world around me and my personal struggles on the side of this mountain were just a single moment in time. There was not much I could control in this situation other than my power to keep climbing. I could choose to do what everything in me wanted to do — toboggan down the side of the mountain and hope for the best or I could choose to draw some strength from an inner well and keep at it.

It was because of that moment that I was able to treasure the experience for what it was. I stopped staring down at the dirt and pebbles and snow beneath my feet and started staring at the stars. I opened my eyes and drank it in. Sure, my body was still burning and my lungs were still aching, but I gained an ability to look past my temporary discomfort in order to really appreciate the world around me.

Eventually my body gave out and my legs succumbed to violent trembling as we approached the final set of icy switchbacks. Anneke and I decided against trying for the peak and we made our way back down without completing the trail. Instead of feeling chagrin at my failure to reach the top, I felt exuberant. Ecstatic, even. I had beat my personal challenge of climbing half-way by almost a mile and I had pushed myself farther than I thought possible. The way down the mountain was beautiful. We did not even use our headlamps due to the brightness of the full moon. We spent the time talking, discussing our lives and the crossroads we were both at in our choices and decisions for the future. Not only did that climb teach me about myself, but it also presented an opportunity to grow even closer to one of my best friends on a pristine mountainside by the light of the full moon. I would do it all again — but this time, with a better jacket and a month of intense preparation.